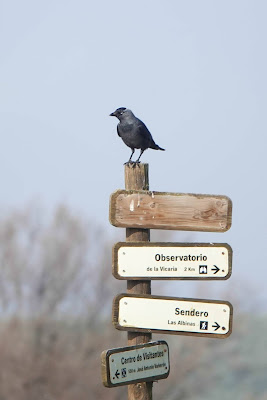 A pleasant Sunday morning so not surprising all the day-trippers and picnickers were out.  Fortunately, I arrived at Fuente de Piedra before the masses so had chance to cross the boardwalk before the masses arrived.

Approaching the reserve there were scores of House Martins and a single White Stork sat on its nest atop the tall chimney.  Pausing a the flooded field t my left I was immediately aware of the large number of Black-headed Gulls along with a handful of both Shoveler and Flamingo.  On the back at the far end a lone Raven whilst more House Martins and Barn Swallows were feeding above the water.

Then it was park the car and walk across to the boardwalk noting Goldfinches in the olive trees along with both House and Spanish Sparrows in the amongst the red berries further on.  A White Wagtail was on the track to my left along with a resting Black Redstart as a Moorhen rushed for cover in the nearby stream and on the water to the left of the boardwalk just a single Coot.  Once on the other side of the boardwalk and a stop at the bend to take the track towards the road I was able to set up the scope and scan the area with both it and my bins.  Lots of Jackdaws at the brick nesting house and off towards the main lagoon I found three Stone Curlew resting between the ground cover.  A distant pair of Mallard and as I returned towards the boardwalk more jackdaw ahead of me and on the open field to my left a huge flock of Feral Pigeons.

So round to the laguenta behind the Visitors Centre taking the path alongside the scrape.  Nothing to be seen until I reached the pool beyond the scrape where there was a tight group of over two dozen Black-winged Stilts. A Crested Lark put in an appearance and stopping at the viewing point by the large tree I could see not only hundreds of gulls on the main laguna but also a number of Flamingos and to my extreme right both Shelduck and Gadwall.

Once at the small laguentas at the back the main pool held many Black-headed Gulls plus Shoveler and a couple of Mallard.  Just the two Little Grebe and a handful of Common Pochard hiding in the reeds to the back.  A few Spotless Starlings were moving about above the buildings on the far side and then off to the smaller pool where where I found a pair of resting Red-crested Pochards.

Time to move on with a first stop at the Vicaria Hide. Here the excitement was not so much the Stonechat nor White Wagtail but the small group of Dunlin feeding on the distant shore. The Cantarannas Hide seemed devoid of all bird life with no water on the land until I saw the male Marsh Harrier quartering the field below.  Not having seen any Cranes I decided I might have to take a chance and travel to the Laguna Dulce by crossing the farm tracks and hope for solid ground below the wheels but just as I reached the turn I looked up to see a flock of eleven Cranes approaching on their way to the laguna behind me.  Not only a lovely and welcome sight but now no need to gamble on passable tracks as I was able to take the road.  As a result of the latter, a Serin crossed the road in front of me followed by a Chaffinch and then a Collared Dove at the farm as I met the main road for the final part of the journey.

Arriving at Laguna Dulce the picnickers had already started to arrive so straight to the , now, damaged hide desperately in need of some repairs to both roof and interior.  The water was white with the hundreds, if not thousands of Black-headed Gulls along with a much smaller number of Lesser Black-backed Gulls.  Once looking away from the gulls I was able to find a small number of Flamingo and and on the far side of the water to my left the main Coot flock, much reduced form the massed numbers of December.  Over to my left apart from Mallards and Common Pochard a few gadwall and Shoveler whilst searching the central area produced a couple of Little and three Black-necked Grebes along with a pair of White-headed Ducks.

Then at the back of the water to my right I found what was left of the Crane flock, totalling about forty individuals and, on the water in front of then, eight Red-crested Pochards.  With more and more families arriving at the site I decided to take a drive round to the back of the laguna, passing both Chaffinch and House Sparrows on the way. Another huge flock of feeding Feral Pigeons and the a Stonechat before arriving at the ruined farm where I turned to make my way back.  A Corn Bunting was sitting in a tree and passing the far end of the water I stopped to check on the Shelduck and recorded a Lapwing.

Time to make my way home for a late lunch but decided to go via Malaga rather than Antequera so that I could make a five-minute stop at Teba's Pennarrubia view point to check out the cliff face and, sure enough, drifting across the top on thermals I counted a total of twelve Griffon Vultures to complete the morning's birding.

Check out the accompanying website at http://www.birdingaxarquia.weebly.com for the latest sightings, photographs and additional information
Posted by Bob Wright - The Axarquia Birder at 02:26