The first "formal" meeting of the Axarquia Bird Group for many a month and so pleased that eight members were able to join me u at Ventas de Zafarraya for a 9.30 start by walking the old railway track up through the tunnel and on to the ruined building before returning to our cars.  As might be expected, this side of the tunnel was in the shade and therefore a little on the chilly side but despite that, five of the six gentlemen were still brave or stupid enough to be wearing shorts - including me!


Once under way we were soon seeing many Black Wheatears and a number of Crag Martins.  Great and Blue Tit were recorded then a calling Wren followed by Linnet, Chaffinch and Greenfinch plus the occasional Rock Sparrow.  No shortage of either Stonechat or Sardinian Warbler and even a Robin just after exiting the tunnel.  No sooner had we commented upon there being no Choughs about than a flock of at least 150 were seen and heard below us.  later, either the same flock or more individuals appeared above the cliffs in front of us with  a few making visits to their usual nesting crags. 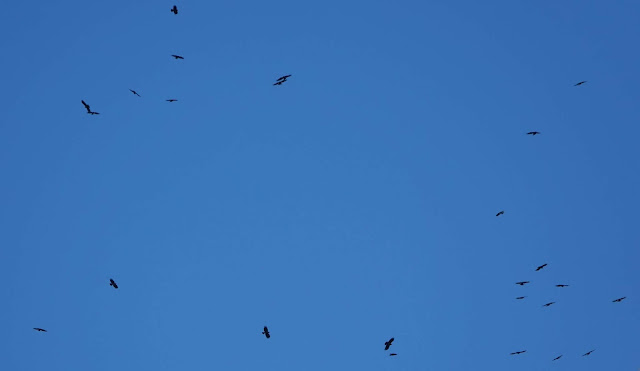 Nearer to the small orchard we started picking up good numbers of Blackcaps and a single Kestrel flew over.  On the pylons a couple of Blue Rock Thrushes and a similar number of Black Redstart.  Finally, we found a Thekla Lark and after a handful of Goldfinches on the return journey our final observation was that of a female House Sparrow.

After a welcome stop for a comfort break and coffee, seven of us made our way up to the woods at El Robledal.  A Jay crossed the track as we approached and we were then greeted by a few Goldfinches. 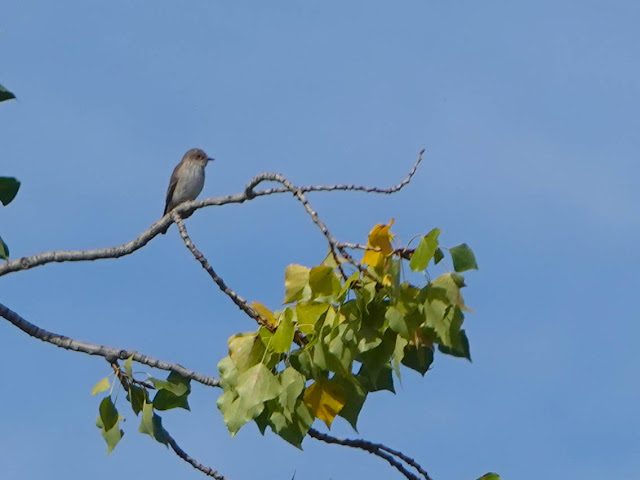 The intention had been to tale a short circular route up to and beyond the upper picnic area but in the event we hardly moved further than the northern and of the parking area.  Why?  Not just a number of Chaffinches in the nearby trees but suddenly a mixed flock of Great, Blue, Coal and Crested Tits.  Turning round we found a male Pied Flycatcher and no sooner had all picked out the bird than it was joined by a female and on the ground below the tree a male Common Redstart.


Back the other way to identify the single Cirl Bunting then the call of a Green Woodpecker.  Back round again as not only were there Pied but also at least a couple of Spotted Flycatchers.  Soon joined by a Robin and more activity by the Common Redstart and we found we had three species in the same bushes as both a Chiffchaff and a Bonelli's Warbler came to join the Common Redstart.


Blackbirds were heard and seen and as we made our way to the southern end of the parking area a Great Spotted Woodpecker flew from the trees across the track in front of us.  Time to make our way back to the local venta for a quick drink before heading off to our respective homes and Derek, Barbara and Micky were able to see both a Buzzard and passing Barn swallow to complete our species for the day.

Great weather apart from the early start, great company and excellent birding with quality over quantity in the 34 species recorded.

Check out the accompanying website at http://www.birdingaxarquia.weebly.com for the latest sightings, photographs and additional information
Posted by Bob Wright - The Axarquia Birder at 09:55