Just four days later friends Steve and Elena Powell were collecting me for the long haul over to Huetor Tajar to meet up with friend Mick Richards for an in depth search for the local Black-bellied Sandgrouse, Little Bustards and Stone Curlews.  With friends Barbara and Derek Etherton along with Micky Smith, Gerry Laycock and David Hird also joining us for the "tour", it was almost like a repeat of Thursday's Axarquia Bird Group visit to the Zafarraya nd El Robleda.  Must be something special about the number "9"!

On our way over to the Cacin Valley by 9.15 and approaching the site we soon had sightings of Hoopoe, Collared Dove, Magpie, Stonechat and both Crested and Thekla Larks.  A short stop to check out the distant Iberian Grey Shrike and we were heading off down a track through one of the many almond plantations, passing House Sparrows, Goldfinch and Serin on the way, to the edge of a couple of large ploughed fields.


Diligent searching by Mick and others soon found the very distant Black-bellied Sandgrouse with a total of at least 16 seen and excellent views through Derek's scope.

Continuing back to take the usual track onto this site we recorded Corn Bunting before stopping to check out the large flock of Spotless Starlings which also contained more then a handful of Common Starling.  Nearer to us a good number of White Wagtails and a small number of Meadow Pipits.  However, many were more taken by the three Northern Wheatear and a really special sighting was that of the single female (UK) Yellow Wagtail Motacilla f.flavissima feeding with the White  Wagtails.

On the other side of the track many Calandra plus a few Thekla Larks followed by  Sky Lark.  A couple of Kestrels and Linnets were noted and then Barbara spotted a distant Barn Swallow before a pair flew immediately overhead.  Up ahead at the old ruin we could just make out the head of a Little Owl in its usual roosting spot but the bird had moved on by the time we arrived.  Moving on we noted many more White Wagtails, another Northern Wheatear and Corn Bunting followed by a group of at least 17 Magpie and a handful of Greenfinches, Serins and Goldfinches plus another Hoopoe.


Time to head off back to the fields at the back of Huetor Tajar and taking the side road with access to the motorway being closed as work was underway to complete the new road towards Alhama de Granada we stopped to watch he feeding Buzzard and once the raptor had moved away noticed yet another Northern Wheatear in the field to our side.

Once back on the fields behind Huetor Tajar we stopped to unsuccessfully find a Bluethroat but did happen upon a good flock of feeding Common Waxbill.  Lots of calling Cetti's Warbler and Crested Larks on the track.  The field beyond the waterway contained a large flock of sparrows, mainly House but certainly a few Tree Sparrows.  Wood Pigeons were departing the copse as we walked up to the river bank and had soon found both Spotted Flycatcher and Chiffchaff along with a number of Blackcaps.  A Grey Wagtail made the briefest of appearances and then our first Sardianian Warbler of the morning.

Back to the other side of the road where we picked up our first Blackbird and more Stonechats.  A walk along the edge of the tall grasses to the railway line produced a couple of Zitting Cisticola and at at least one Reed Warbler as well as more Blackcaps and Goldfnches.  Our penultimate stop on the track alongside one of the small tributaries to the Cacin with a very small trickle of water produced a good number of Azure-winged Magpies (now known as Iberian Magpie) along with a few Spanish Sparrows.  A couple of Cattle Egrets were recorded and whilst most of us searched the stream Steve and David, the only men wearing long trousers save Gerry, took a walk through the tall grasses towards the railway line where they managed to unintentionally flush a Jack Snipe followed by a second unidentified Snipe.  Returning to the cars, many of us saw the two Common Snipe that took off from under the railway bridge and then a third from below the bank, probably the unidentified Snipe seen by Steve and David. 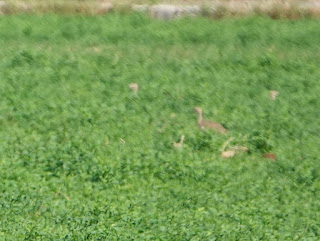 As we set off for our final destination on the far side of the town we had a small flock of Lapwing and then, successfully, found a flock of at least 25 Little Bustards feeding at the back of a very green field.  A Kestrel watched us depart to check out the Stone Curlew site but with road works in full swing no sign of any so our car plus David made our way back to the meeting point for a drink and departure home.  Meanwhile, Derek's car followed Mick home to collect items for transport back to the UK and then they managed to walk the usual path from the back of the town where they actually not only found 16 more Little Bustards but also about 12 Stone Curlew.  All in all a most successful day's birding in excellent, friendly company and a final total of at least 49 species.

Check out the accompanying website at http://www.birdingaxarquia.weebly.com for the latest sightings, photographs and additional information
Posted by Bob Wright - The Axarquia Birder at 02:09