Rain forecast for 10.30 so made sure i was up early and over at Rutland Water by 6.55.  So early all gates still shut so had to park on the verge of the entrance lane.  Straight to the feeding area in the hope of an early morning visit by a Great Spotted Woodpecker but not to be. I had both Collared Dove and Pheasant and a couple of exiting Chaffinches as I took my seat.  In came the first Blue Tit along with both House Sparrow and Dunnock and then, wonder of wonders, a single Marsh Tit.  Just a few seconds on the nearest feeder before disturbed and moved to the rear feeder but, again, just for seconds before departure and too quick for me to get the camera out and a quick record shot.  But still a lovely sighting.

The morning had started well wit a good number of Mute Swans on the main water as I drove past and no shortage of either Carrion Crows or Wood Pigeons.  However, as I turned into the last lane leading to Egleton I saw the gathered masses on the recently cropped field to my right, there must have been at least 250 Greylag Geese.  Presumably the birds had been here since first light as I noticed many making their way back to the main lagoons, especially Lagoon 4, in the next hour or so.  A Jackdaw sat on top of the church spire and a Magpie crossed the road in front of me.  A further corvid was recorded when I left the above feeding station to take a look at the gathered Rooks in the trees to the back of said station. 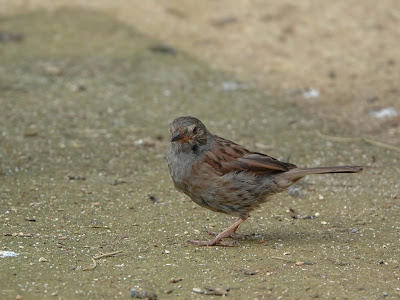 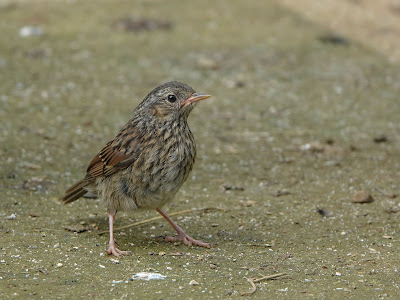 So on to the Sandpiper Hide overlooking Lagoon 4 with just a cursory stop at at the Redshank Hide.  This first stop confirmed my worst suspicions that indeed there had been a great increase in water levels so not expecting to find a lot of wading territory on any of the other lagoons, Lagoon 4 being the most likely to have some shore line.  How right I was.  Wading territory but not a lot of birds apart for resting Mallards and Lapwing and a dozen or more Little Egrets.  Both Little and Great Crested Grebes were recorded along with very many Black-headed Gulls, Coot and a number of Mute Swans and Canada Geese.  (As I was departing I started to notice the arrival of more and more Greylag Geese from their nearby arable feeding.) 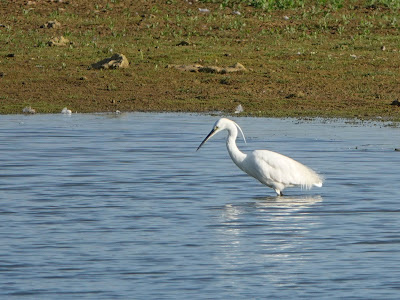 Whilst I picked out a quartet of Teal and a single Redshank being harassed by one of the Lapwing, the main attraction was the distant "blob" on top of the pole beyond the Osprey platform.  No scope with me today (less to conceal should the rain come early) I knew that the bird was an Osprey and the subsequent photographs were to prove me correct.  Then the bird disappeared as I searched the rest of the lagoon to reappear on the nesting platform.  Not only nearer but then the decision to go fishing so was able to see a couple of unsuccessful approaches and attacks; perhaps this was one of this year's youngsters?  More photos on a separate blog I think.

My final visitors were a couple of Common Sandpiper and a single Egyptian Goose that wandered over the spit just opposite the hide.

Leaving the hide a small bird was disturbed at the foot of the entrance path by a landing Blackbird and I was able to follow it to a large tree near the nearby exit gate.  Bins picked out the bird as a handsome Bullfinch and it remained partly concealed whilst I tried out a distant shot with the new Sony RX10M4 camera. [See footnote re previous large equipment.]

The Shoveler Hide overlooking Lagoon 3 revealed just how much the water level had risen this past week with no island just in front of the hide and very many ducks and Coots further out.  It certainly looks as if the autumn arrival of both Mallards and Coot has started as no there ducks were identified apart from the handful of Teal in the shallow water to my left.  Along the grassy level behind the hide a pair of Blackbirds were posing and appeared to be in the process of pairing up for, presumably, a new clutch whilst in the same tree a Garden Warbler did its successful best to conceal itself from the attention of the camera.


The Smew Hide produced a very high level Lagoon 2 and even the breeding platforms seemed to have been detached albeit  a small float did contain a Common Tern and below me a Moorhen drifted by and was greeted by her single youngster.  At last the sight of the local Sand Martins feeding over the water around their artificial nesting bank.

It was only when I visited the Lapwing Hide that I found the Tufted Duck along with Common Pochard who all seemed to have taken to the main water of the South Arm albeit sheltering just off the north of Brown's Island.  This was also the only water to produce a few Gadwall. 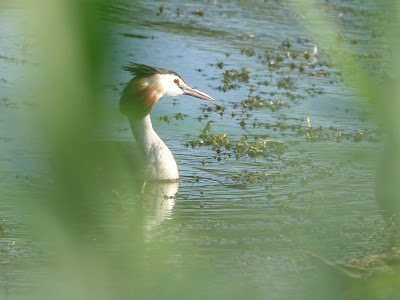 So, time to make my way back to the Visitors Centre, assuming that it might be open by the tine I arrived, but first, at the last moment, a decision to just pay a quick return visit to Lagoon 4.  Approaching  the Sandpiper Hide along the entrance path I noticed the movement in the bushes opposite and was delighted to be rewarded by a family of Whitethroat.  Once back inside the hide I also found that a couple of Common Starling were resting on top of the Osprey pole and at the side the Great Black-backed Gulls were now visible.  Leaving the hide, the Whitethroat had been replaced by a small charm of Goldfinches.


Nothing new at the feeding station other than  an adult female feeding her young Blackbird and a Brown Rat Rattus norvegicus on the prowl looking for food that has fallen from the feeders so a quick call in at the Visitors Centre to confirm that there were still resting Cormorant on the water of Lagoon 1 outside.  A quick tally before setting off home and so missing the coming rain confirmed that I had recorded 41 species in my two-hour stay.


[FOOTNOTE.   Whilst I have been able to sell most of my Canon photographic equipment, I still have two large lenses for anyone interested. Both f5.6, the 100-400 IS USM lens was valued at about £350 by London Camera Exchange on my Derby visit so make a sensible offer and the 400 Prime should be worth a similar figure.  Both are Mark 1 models not the latest releases.  They will accompany m back to Spain.]
Posted by Bob Wright - The Axarquia Birder at 09:32