So much for an early arrival when I found myself stuck at Tallington level crossing for fifteen minutes and then, just as I thought we were away at last, down came the barrier for another complete five minutes.  Eventually, I arrived at RSPB Frampton Marsh on the outskirts of Boston at 9.50 but, at least, I did have the joy of seeing a Red Kite on the way to Spalding and a further two individuals as I approached Frampton.  The narrow lane leading up to the entrance also produced Crow, Magpie, Wood Pigeon and Blackbird, all of which I was to see again during the course of the long morning.  Weather wise, the wait at the level crossing enabled me to remove my jumper so it was shirt sleeves and shorts in lovely warm, sunny weather with only a little broken cloud.  But very windy when exposed up on the bank overlooking the saltmarsh.


Straight to the far car park near the saltmarsh having first checked in a the Visitors Centre to see what might be about at the moment.  Informed that plenty of Wood sandpipers around along with Little Stint and the "rarities". However, most were obviously early morning sightings as I only found a single Wood and Green Sandpiper along with a handful of Common Sandpipers.  Not even a Spoonbill on the reserve and the Dowitcher and White-rumped Sandpiper appeared to have moved on - or been driven on by yesterday's awful weather.The scrapes grassland held a small, tight flock of Black-tailed Godwit and on the western side a few of the breeding Avocet with now quite well developed youngsters.  Naturally, Coots and Black-headed Gulls about but then it was time to walk the high banks westwards.


All very quite and at the end of the waters a small number of both Greylag and Canada Goose along with family parties of Shelduck.  Carrying my large, and heavy, scope I soon found a few "hiding" Lapwing and then the pleasure of a couple of distant Ruff.  Towards the back of the water a trio of Little Egret and the constant movement of the large flock of Common Starling.  Just before setting out on the return walk to the small car park below the steps I also managed to find a couple of Ringed Plovers and the first of the morning's Sky Larks.  Finally, searching the saltmarsh I eventually found a resting Kestrel atop a fence post way out from the bank.

Making my way back to the car I spent a little more time checking the waters either side of the road and on the eastern side noticed the handful of Shoveler in amongst the few Mallard.  A Reed Bunting had been picked up on the fence wire as I came down the steps and now I had a Reed Warbler to my right and a couple of Redshank to my left.  The Black-tailed Godwits were still very much huddled together as a Pied Wagtail flew across them and on over the road in front of me.  But to my left the Great Crested Grebe seemed to have found some special fish.


Back at the Visitors Centre activity of the feeders was very much centred on the feeding Golfinches including many juveniles yet to moult into their red faces.  Just the single Greenfinch but also a few House Sparrows and a visiting Collared Dove along with a Blackbird.  Out on the water I managed to add a Moorhen and had a good view of the adult Black-necked Grebe along with its single, well-grown chick.  A number of Mute Swans and more Greylag Geese and the occasional Lapwing and Avocet nearby.


The hedgerow path took me to the ponds at the far end and the viewing site for the visiting Turtle Doves and, sure enough, no sooner had a I stopped at the signpost reading "You are standing in the best place to see the Turtle Dove" than I looked along the hedge to my left and their, sitting quite contentedly in a bare tree, was the Turtle Dove.  On the larger reservoir I had a quartet of Teal and as I made my back to the "hidden" path I looked to my right and finally saw my first and only Wood Sandpiper.  No sooner seen than it seemed the departing Green Sandpiper also wanted its name down in the notebook.  A female Blackcap crossed the path to rest in a neighbouring bush and then a Robin.  On the left a lovely sight of a posing Dunnock but too dark for the camera - as if the bird would wait that long anyway!

Once back at the Visitors Centre I picked up the small scope and continued on the the 360 Hide.  Once ensconced and ready for my picnic lunch it became even more obvious that the water levels were much higher and the birds far fewer.  Another Black-necked along with a Little Grebe and more Little Egrets, Canada and Greylag Geese.  A small number of Mallard but plenty of Coots and the occasional Lapwing by way of variation.  To the right of the hide a single Ruff was busy feeding and, again, plenty of Black-headed Gulls to be seen but also my first Tufted Duck of the morning. 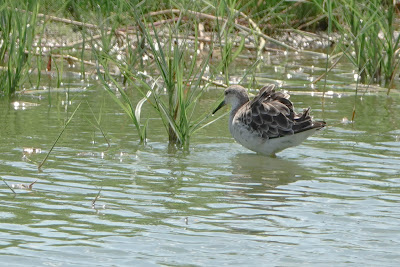 A short stop at the Reedbed Hide produced more Lapwing and another Ringed Plover along with a Great Crested Grebe with a single, well-grown but still "humbug" youngster in tow.  On the far side I managed to find a single Oystercatcher and a at least three Common Pochard on the water.

Check out the accompanying website at http://www.birdingaxarquia.weebly.com for the latest sightings, photographs and additional information
Posted by Bob Wright - The Axarquia Birder at 13:06