With the promise of a lovely warm and sunny day I set off up the A1 to meet my birding friend, Chris Bell at the Idle Valley Nature Reserve's Visitors Centre.  There was Chris patiently waiting for me by the pond where we watched numerous Reed Warblers and also picked up Pied Wagtail and Magpie before moving inside for a coffee and watch the birding activity on the water in front, all the time distracted by the numerous Reed Warblers in the reeds not three metres away from our table.  Lots of Lesser Black-backed Gulls along with both Canada and Greylag Goose, Mute Swan, Coot, Tufted Duck, Mallard, Common Pochard and a single Red-crested Pochard.  A couple of Carrion Crows flew across the water and a Moorhen was paddling about to our left.  Further study eventually found a couple of Oystercatchers along with the good-sized flock of Lapwing and, as might be expected, there were roaming Starlings to be seen.

Suitably refreshed it was back to the car for the short drive up to Lound where a stop in the centre gave us the opportunity to pick up the local House Martins and a single Barn Swallow before turning right to make our way down Chain Bridge Lane.  Indeed, returning to the car we even had a friendly Robin feeding on the ground a few metres away.  With the car parked at the of  Hawthorn Lane we set out on our anti-clockwise walk noting an almost empty Wind Surf Pool save for a pair of Mute Swans with their two cygnets.  By now we were regularly hearing and seeing Blackcaps before stopping to check out the centre of Chainbridge Scrape from the first observation screen.  Here we not only found a number of Little Egrets along with Coot and Mallard  but also Common Tern, a couple of Heron, our first Great Crested Grebe of the day and a number of Cormorant.  A Common Whitethroat was singing his little heart out in front of us as a Blackbird flew past.

Next it was on to the two screen overlooking Neatholme Scrape passing both Chiffchaff and Blackbirds on the way.  This was very much the Mute Swan water but also a selection of the usual ducks with mainly Mallard and Tufted Duck plus, of course, many more Coot sightings.  Similarly, a good number of resting Black-headed Gulls and then we found a pair of Avocet.  However, the main concentration was on trying to find the suspected local Grasshopper Warbler.  No luck at the first screen but the second screen duly turned up trumps with a singing specimen,  I thought there might even have been two individuals present.  Lovely to hear this distinctive song again after so many years.  Also a good opportunity to eat our picnic lunch before moving on the nearby Neatholme Fen screen.

On arrival more Little Egret and a few ducks and then, above the distant trees on the opposite bank a pair of soaring Buzzard.  A Blue Tit was working a nearby tree and then Chris drew my attention to the Hobby that had put in an appearance away to our right on the northern edge of the water.  Another lovely, distant, sight as it quartered away westwards to the opposite bank and disappeared behind the trees to be replaced by an arriving Kestrel that manage to find a resting point in one the said trees.


Before turning south into Cross Lane we stopped for a final look at the far end of Neatholme Fen and spent a little time watching the pair of Egyptian Geese with their three well-grown goslings. 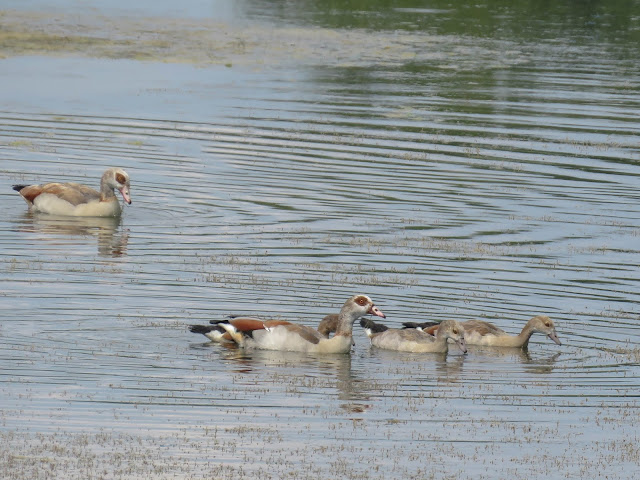 Once in Cross Lane we made a couple of stops to observe both Blackcap and Reed Bunting before finding another Chiffchaff and then a handful of Long-tailed Tits.  Then it was on back towards the car at the far end of Hawthorne Lane but this time we remembered to find the concealed entrance that gave a view over the northern (West) end of Chainbridge Scrape.  What a good job we did stop here at about 3.15pm.  Not the Coot or the Mallard but the Great Bittern standing exposed at the edge of the reeds win its classical pose of head stretched high.  Just a shame it was so far away and partly obscured by the trees in front of us making focusing, especially at a distance, so difficult.  Not only a Great Bittern but then a Marsh Harrier flew over the site.


Once back at the car our net stop was just a little further on the take a look at Chainbridge Scrape East.  This always seems to me a wonderful site for waders and, eventually, apart from the many Lapwing, we did find Little Ringed Plover, and a Green sandpiper.  Goldfinches flitting about below us and another good supply of ducks, Coot and Little Egret, with the majority being Tufted Duck.  Also a number of Black-headed Gulls and Common Tern.


Almost at the end of our visit to Lound we ended up at the River Idle itself where the nearby Conservation Lake, as last year, produced our first Little Grebe of the day.  A couple of local birders already at the site informed us of the Hobby they had seen and were sure that the bird had settled in a mid-distance tree.  Whilst they went of to investigate Chris and I were able to get a better view of the bird itself and confirm that yet another of the scores of Wood Pigeon seen during our visit.  On the other hand, looking beyond the lake we could see a trio of Jackdaw resting on top of a large bird box.  Meanwhile our walk east and then south gave us views over the nearby Tiln North where we found very many Greylag Geese along with a few Carrion Crow and Lapwing.  As we watched we able to also add a pair of Magpie and the a Redshank came in to feed

Time to leave and make our way to relatively nearby Newington, east of Everton on the Notts/Yorkshire border - but just inside the former. A right turn in the hamlet took us down to the end of Hagg Lane where we parked the car to take a look at both the River Idle and the edges of Slaynes Lane.  The big attraction here in this lonely site (until car, a pair of runners and then a couple of cyclists all seemed to arrive at the same time - nobody else was seen during our stop) was the small bird standing on the road some distance away between overgrowth on both sides.  Chris immediately though young Pheasant but the bird was standing upright and, and I been in Spain where I see so many, I would have immediately said Red-legged partridge.  However, this bird was certainly not an RLP and was then joined by a second individual walking out onto the track and confirmed that both were partridges but, on this occasion, Grey Partridge.  A second unexpected and wonderful sighting for the afternoon.  However before I could lift the camera the above visitors all seemed to arrive almost on top of the where the birds had been -now having rapidly disappeared on the other side of the track not to be seen again.

Turning the car round we then stopped to spend some time checking out Hang Lane Flash and what a glorious little site this was with a Pied Wagtail, a single Heron and no less than 35 Little Egrets.  A couple of Oystercatchers flew in and there was always at least one Carrion Crow on view.  Above the water and mud a constant supply of hirundines; mainly House Martin but also good numbers of Barn Swallow and the occasional Sand Martin.

And so to our final stop of the day, just back along the road at the Ship Inn.  Before taking a lovely evening meal and then setting off for Worksop followed by Stamford, a look over the meadow from the top of the dyke embankment gave good views of the large flock of Little Egret whilst a couple of Collared Doves sat on an aerial.  In front of us a couple of Linnets were in a tree below the embankment, Carrion Crows to our left and above more views of House Martin and Barn Swallow plus, in addition, a mall number of Common Swift.  House Sparrows in the village as we departed and once on the way home after dropping off Chris, no shortage of Rook, especially once on the A1 west of Worksop.

A truly most enjoyable day in great company and made all the better with the Great Bittern sighting and a final species tally of 56 for the day.

Check out the accompanying website at http://www.birdingaxarquia.weebly.com for the latest sightings, photographs and additional information
Posted by Bob Wright - The Axarquia Birder at 04:40