My birding friend Bryan Stapley returned to the UK just on two years ago with his wife, Paula to take up residence in Darlington.  I was delighted, therefore, that he was able to travel down and stay with me in Stamford for a couple of nights so that he could experience birding on my local patch.  The only downside was that rain was forecast for both days with Wednesday having a 94% chance of the wet stuff.  With visits scheduled to both Frampton Marsh near Boston and nearby Rutland Water which to visit first?  In the end it was left till the very last minute and having prepared picnics for the pair of us I met Bryan at Stamford railway station and we headed off to Frampton Marsh, arriving a few minutes after mid-day in the hope that, at least, we might get a couple of hours of dry weather.  Dry weather; not a singe drop of rain all day albeit it was cloudy calm and cool most of the day apart for an hour or so in the afternoon when the sun tried its best to break through and it became very warm and humid.  The end result was a very enjoyable day's birding with lots of species but on much smaller scale than the previous Wednesday when I visited with Chris Bell.  Could it have been down to the low tide during our visit with many of the waders on the shore or had hundreds and both Black-tailed Godwit and Knot simply moved on? 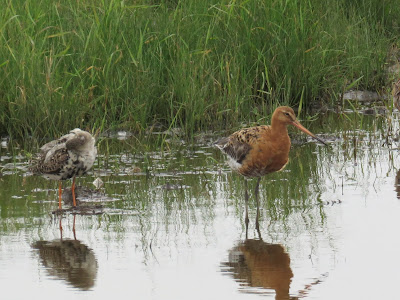 With both Kestrel and Pheasant seen as we approached the entrance followed by the first of many Magpies, we thought we might be in for a good day and so it proved to be.  Straight into the Visitors Centre and the lake in front produced numerous Black-headed Gulls along with Mallard, a quartet of Spoonbill, many Coot and the occasional Moorhen.  Further detailed study the found Lapwing, Little Grebe, Mute Swan, Little Egret and a good number of Black-tailed Godwit plus a single Bar-tailed Godwit.  However, at the far side of the water near the Spoonbills a small inlet had a single wader which proved to be a Reeve, our only Ruff of the day.  No sooner had we found the wader than a Common Sandpiper walked across the entrance.

Meanwhile, outside the side window on the feeding station were a good number of Goldfinches and Great Tits which were then, eventually, joined by a single Greenfinch, Blackbird, Dunnock and a few Blue Tits.  Scoping to the right we eventually found a pair of Gadwall along with a similar number of Teal and the very far end of the water the Black-necked Grebe and youngster put in an appearance whilst, once ensconced in the 360 Hide, we had Canada Geese, Tufted Duck and a number of Shelduck to the rear. As with the previous water there were plenty of Greylag Geese to be seen, indeed just about everywhere along with the many Lapwing.  Naturally, there were Great Crested Grebes to be seen and in the far distance a couple of Oystercatcher.  An ideal opportunity to eat our picnic before continuing on a clockwise circuit of the reserve and wondering weather or not the rain might arrive and catch us well exposed up on the high bank overlooking the saltmarsh.

The Reedbed Hide produced nothing new and it certainly seemed as if there were fewer birds about compared with last week.  However, interesting to watch the continuous movement of the Starlings from one are to another.  Once at the back of the reserve we found a male Reed Bunting and then a very exposed Sedge Warbler that delighted us with its song from the top of a small tree; beautiful!


Approaching the East Hide we were very much aware of the good number of Avocet and young on display and then we were joined by a very active Reed Warbler who obviously had a nest of youngsters somewhere close by before the pair of Shelduck as we entered the hide.  From the hide itself we picked up a Pied Wagtail and then set off to walk the high bank noting the Sky Lark as we approached the steps.  Looking down on the reserve we soon found a single Redshank and then a small flock of Dunlin.  Just the one Little Ringed Plover before, close by on the saltmarsh, a quartet of Brent Geese.


Before reaching the steps down to the road we found our Knot, maybe a couple of hundred but nothing like the thousand plus of the previous week.  Rather than descent to the road we continued on for a short while and picked up a distant Carrion Crow, our only one for the day where we would expect to see double figures.  Also on the marsh a Lesser Black-backed Gull and to our great delight we had excellent views of the Spotted Redshank in its black uniform on the water to our right.


Once back at the car park we could hear the local Turtle Dove singing away and back in the Visitors Centre enjoyed the visit of a couple of Common Tern whilst Collared Dove and Great Tit had come to visit the feeders.  Outside, as we made our way to the car a couple of Barn Swallows were feeding around the area and no sooner had we reached the end of the entrance/exit road we finally saw our first House Sparrows of the day.


C
heck out the accompanying website at http://www.birdingaxarquia.weebly.com for the latest sightings, photographs and additional information
Posted by Bob Wright - The Axarquia Birder at 12:01