Four Days in Extremadura - Day One

Up very early having already packed last night and met by Steve and Elena Powell to drive to Lucena to join up with Derek and Barbara Etherton for breakfast at the motorway Service Station.  No sooner in the car than the rain started and absolutely through it down for the first art of the journey but we still saw saturated Buzzards sitting on top of the pylons along with Wood Pigeons as we made our way north.  Once refreshed it was onwards and upwards to Extremadura via Cordoba and much rain during the journey.  Approaching Cordoba we added the expected Black and Red Kites along with Wood Pigeon, Collared Dove, Spotless Starling and White Stork.  Plenty of Corn Buntings and Crested Larks about and working our way to the north of the province we also added Little Owl, Crow and Hoopoe.  A couple of distant Griffon Vultures added to the variety of species followed by Azure-winged Magpie, Cattle Egret, Blackbird and Kestrel.   Derek and Barbara managed to see both Great Spotted Cuckoo and a Sparrowhawk whilst we all noticed the eight or nine Cranes sheltering at the back of a roadside field.

A Barn Swallow as we crossed the river and then we were in Extremadura and ready to meet the challenge of the steppes.  Almost immediately Goldfinch, Greenfinch and Red Kite before another distant Griffon Vulture and many roadside Crested Larks and House Sparrows.  However, before long we saw our first very large flock of Spanish Sparrows and then numerous sightings of the local White Storks.  Both Serin and a pair of Mallard were recorded along with a Black-winged Stilt in one of the numerous ponds on the very many flooded fields along with a single Lesser Black-backed Gull.

No sooner had a trio of Pin-tailed Sandgrouse crossed the road in front of us than seven Great Bustards took to the air in the opposite direction.  By now we were seeing regular sightings of Calandra Lark and then a score or more Golden Plover in the field to our left.  Then followed Corn Buntings and Raven and even a single, soaring, singing Sky Lark before the first of many Hoopoe sightings and a couple of Meadow Pipits.

Turning off road onto a track across the steppes it was not so much the Meadow Pipit, Hoopoe or many Magpies but the lone, presumably just-arrived, Subalpine Warbler that took pride of place.  A short distance on we added first an Iberian Grey Shrike and then a rather lovely Little Owl.  Just across the track a first Northern Wheatear then a male Stonechat and a posing Red-legged Partridge.

We were soon stopped by the raging river across the normally shallow ford and no way we were going to attempt a crossing, albeit Elena did venture in a couple of metres in her "wellies" and then thought better of the exercise!

Whilst here we had our first sight of a Golden Eagle that took to the skies at the most inconvenient time of a comfort break behind the bushes but did reappear for the benefit of others on the other side of the track along with a Short-toed Eagle!  A Curlew was heard calling then it was back to the main road.

Not long along the road and we stopped to look at a small pool holding a pair of Mallard to discover feeding Barn Swallows above the water and a resting Egyptian Goose at the side. It was shortly after that Steve noticed the small flock of thirteen Great Bustards and we managed to get a few quick shots as the birds took to the air and as they returned we noticed that they had managed to pick up an extra individual. 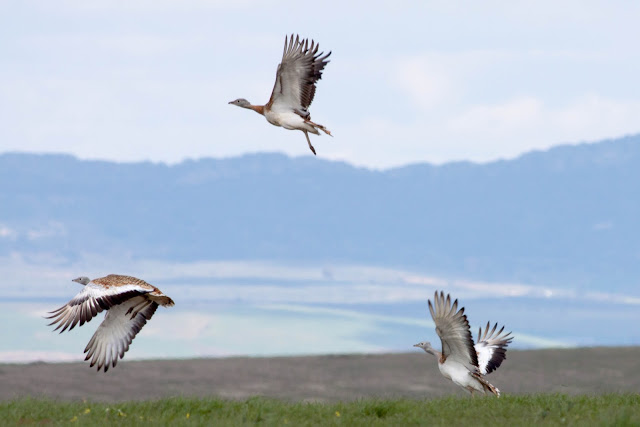 Continuing northwards we added first Common and then many Lesser Kestrels.  A Cormorant flew over as crossed the dam of a large reservoir.  Taking a short-cut to the Alcollarin reservoir we stopped to admire the Golden Plover and found at least two Black-bellied Sandgrouse.  Arriving at the reservoir with a very rough surface we found both Black-necked and Great Crested Grebe along with Mallard, Shoveler and Pochard.  Derek and Barbara added both Greenshank and Redshank as we drove down to the picnic area and from this vantage point we then recorded Spoonbill and Great White Egret.


A Chaffinch was calling in the trees as we made oi way across the track below the lower dam to take a look at the far corner of the water,  Not just a single Flamingo but soon a handful of Tree Sparrows and a single Sardinian Warbler on the brambles.  Once at the far end we were able to look down in the water and find both Great White Egrets and a number of ducks including Wigeon, Pintail and Gadwall.   Also present were Little Egret, a Green Sandpiper and above us a small number of Common Swifts whilst a Crested Lark, along with a Blackbird, worked the banks.  To make matters worse for our car, Barbara and Derek following behind added a Common Cuckoo to   the day's tally. 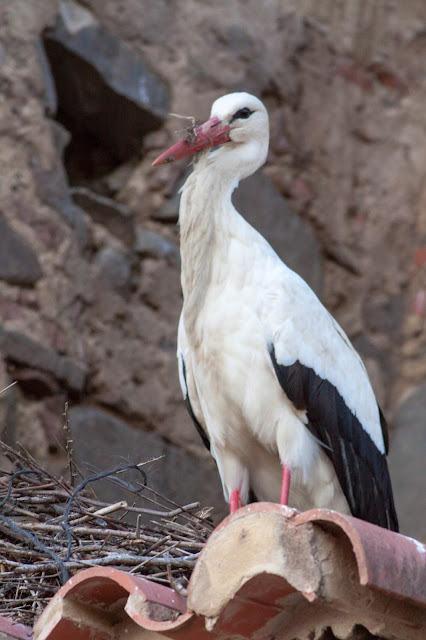 Check out the accompanying website at http://www.birdingaxarquia.weebly.com for the latest sightings, photographs  and additional information

Posted by Bob Wright - The Axarquia Birder at 10:58