Pleasant and calm start to the day for the March field visit of the Axarquia Bird Group with much broken cloud and becoming much warmer and even a little breaking sun by the time we departed over four hours later.  On this occasion, just the three of us as I was joined by Derek Etherton and Micky Smith.  Great shame as, having been informed of their presence on site, if we were lucky, we had wonderful views of the pair of Spotted Crake; shame there were not more of us to enjoy the experience and we even managed a total of 58 species.

Whilst waiting for the others to join me I had a tree full of Spotless Starlings and the occasional Cormorant moving about the site and House Martins overhead.  A Blackbird was seen along with a Robin and Goldfinch and even a distant Booted Eagle resting in the a bare tree near the Laguna Grande. So off we went towards the footbridge and soon picked up Barn Swallow and, of course there were a few Rock Doves under the motorway bridge.  A handful of Jackdaws flew past us and then no sooner had we recorded a Greenfinch at the top of a nearby tree than we crossed the footbridge and found a single Zitting Cisticola in a similar position.  A Kestrel flew out of a nearby small tree and above us we ere fortunate enough to locate a high-flying Great White Egret.

Once at the Laguna Casillas we had not just feeding House Martins and Barn Swallows but also a single Sand Martin seen by Derek and a handful of Crag Martins.  Almost a score of Common Pochard on the water along with Little Grebe, Coot and Moorhen plus the expected Mallard and White-headed Duck.  A Cetti's Warbler was calling loudly from below us in the hide and no sooner seen than Micky spotted the one Red-rumped Swallow seen during the morning and also a pair of departing Little Ringed Plovers. 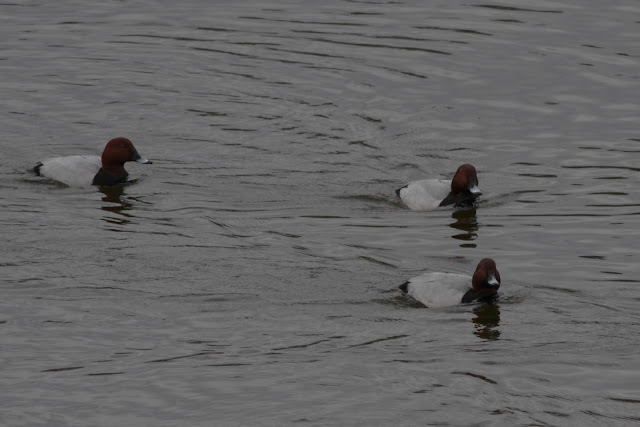 Then we moved on to take a very detailed study of the scrape on the other side of the track and its small amount of exposed water now known I believe as the Laguna Torrecilla.   Whilst we watched a Bluethroat made a sudden descent and disappeared into the grasses at the water's edge but was seen on a couple occasions as it moved about the vegetation.  I found a skulking Moorhen and got all excited about nothing and as we were about to look elsewhere on this small pool out walked the Spotted Crake.  It remained in the area for almost ten minutes and showed very well at times to the great pleasure of all three of us albeit difficult to try and get a photo as we so busy watching the bird through our scopes.  A little disturbance revealed that a second individual had put in an appearance but this proved too much for the Moorhen who chased them off back into the vegetation and not to be seen again.

Continuing on down to the Wader Pool we added a good number of Black-winged Stilts but, apart from a pair of Mallard, very little else.  A similar story with the Rio Viejo, the Old River, as a result of the high water level which had completely covered all the small islands.  However, the water did contain a trio of Avocet and a similar number of Greenshank along with a single Redshank.  On the bare ground below the track on the opposite side we had a pair of Red-legged Partridge and then found a couple of Meadow Pipits in with the dozen Spotless Starlings and a male Sardinian Warbler along with a couple of Serin.

From the Sea Watch the best we could do was a Cormorant resting on the sea and a passing Gannet travelling westwards.  Two Crested Larks put in  appearance as we left to make our way along the beach.  Very profitable as this ten minute walk produced a quartet of Sanderling along with eighteen Kentish Plovers and a lone Whimbrel which flew in from the sea, rested less than a minute and then set off again.

Once at the main hide overlooking the Laguna Grande we had a dozen White-headed Ducks (not often seen on this water), about a score of Black-necked Grebes and other ducks including Mallard, Shoveler and Shelduck.  Still more then a dozen Cormorants present along with a single Heron but only one Flamingo now remains.  At the far side we found a single Black-tailed Godwit alongside the handful of Black-winged Stilts and a few Black-headed Gulls.  On the other hand, there was no shortage of Collared Doves and even a quintet of Monk Parakeets finally put in a first appearance of the morning.  Finally, a pair of Gadwall leisurely sailed across the back of the water before we made our departure.

Our final stop at the Laguna Escondida at first seemed wasted but as we looked at the five male White-headed Ducks and the odd Moorhen and Coot we became aware of the activity of all the feeding Chiffchaffs immediately below and near the hide.  There seemed to be a great variation of colour but we did also manage to find a second Willow Warbler of the morning.  Right at the back a pair of Teal and a Hoopoe resting in a bare bush and then, above the lamp-posts on the far side of the motorway a distant Osprey before also having a Marsh Harrier head into the reserve.  What a wonderful way to complete a very pleasant morning and still very many memories of the Spotted Crake.

Check out the accompanying website at http://www.birdingaxarquia.weebly.com for the latest sightings, photographs  and additional information
Posted by Bob Wright - The Axarquia Birder at 09:53