After having been offered a huge breakfast included in the price, incredible value for money  but just a shame that the hotel was a little of the proverbial beaten track, we started off on the long journey back home to Alhaurin de la Torre, Frigiliana and Mezquitilla respectively but not before a last four hours once again exploring the steppes of southern Extremadura based on the Plains of La Serena where, all being well, we hoped we might get better views of the Great Bustards and both Sandgrouse species in the warm sunshine with clear blue skies.  Sadly, whilst we saw some wonderful birds, the target species were not to be seen in the expected numbers.


Leaving just before 9, within a few minutes we turned left over the bridge and there, immediately next to my window, was a Nuthatch, perhaps the least expected bird to be seen, and, following on behind us Derek and Barbara saw the Merlin flash across the road and narrowly miss actually hitting our car.  Before reaching our destination nearly two hours later using the motorway, we also recorded many White Stork, both Red and Black Kite, Buzzard, a number of Hoopoe, Magpie and Azure-winged Magpie and numerous barn Swallows.  It seemed that even the local Jackdaws came out to bid us safely on our way.


The EX-349 was a narrow, quiet country lane not so dissimilar to driving over the Pennine Moors and resulted in frequent stops as we looked at Little Owl, Crested Lark, Corn Bunting and even a Thekla Lark.  Then came the major stop as we found a magnificent Golden Eagle above us and, no sooner had it moved away, than a male Montagu's Harrier came into view.  No shortage of Corn Buntings and even a pair of Mallard on a small pool added a little variety.  And all the time a regular supply of "floating" Griffon Vultures making good use of the thermals. 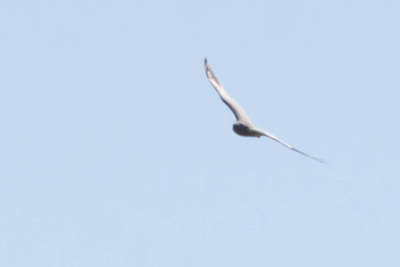 Once off the main road and onto the long tracks we were to explore for the next few hours, we almost immediately added the first Lapwing seen during our visit and, again, very many Calandra Larks.  Another pair of Hoopoe and then sightings of Red-legged Partridge.  Naturally, whenever we seemed to find trees and water there seemed to be large flocks of Spanish Sparrows.  A Short-toed Eagle drifted overhead which certainly scattered the small charm of Goldfinch.


Taking a turn to the left to explore a sandy track we drove past the small feeding flock of Meadow Pipit and stopped to admire the large bird away to our right as it gradually gained height; our first Spanish Imperial Eagle.  Not long after we were confronted by the flooded river, where we disturbed a feeding Wood Pigeon, so a case of turning heading back to the main track.  Stopping where we had seen the Spanish Imperial Eagle not twenty minutes previously we now had low level Black Vulture to concentrate our minds.


From then onwards, apart from numerous Calandra Larks, there was relatively little to be seen although Derek and Barbara managed to find a trio of Little Bustards and we had eight Black-bellied Sandgouse in the air in front of us.  A White Wagtail put on an appearance and before regaining the main road near Almorchon we also added an Iberian Grey Shrike.  Then a short coffee stop at Cabeza del Buey before the long drive home via Cordoba, in my case being dropped of at almost exactly 6 o'clock.

Checking the lists of birds seen by all of us and comparing notes with Barbara and Derek I found that we had recorded a magnificent total of 114 species and managed to find, between us, just about all the target birds other than an Eagle Owl.

Check out the accompanying website at http://www.birdingaxarquia.weebly.com for the latest sightings, photographs  and additional information
Posted by Bob Wright - The Axarquia Birder at 13:08