Jenny having completed her early morning hospital treatment, the the sun shining in a clear blue sky and not wanting to spend all day revering in bed, we decide upon an afternoon drive over to Loja and then up the mountain track to  Charca del Negra and beyond.  Greeted by both House Martins and House Sparrows, as we passed through the trees on the lower slopes we soon saw Azure-winged Magpies, Chaffinches, Rock Doves and Woodpigeons.  There seemed to be Spotless Starlings both here and at every level as we made our way to the top.

Working our way up through the higher trees we soon added both Crested Lark and the first of many Chough.  A Red-legged Partridge flew away in front of us whilst overhead we could see a single quartering Common Kestrel behind the small flock of Jackdaw.  Just as we left the tree-line one, then a second, Green Woodpecker flew up from the shady grass and into nearby trees.  Once clear of the trees a stop to look down at the slopes below and the beautiful corn field full of blazing red poppies revealed a Whitethroat in a close tamerisk.  Hoopoes were calling then seen and the first of very many Stonechats put in an appearance.

Our first Black Wheatear was seen on the rocks a little higher up the track and then a female Northern Wheatear on the ground to our right.  It was whilst looking at a Blue Rock Thrush on top of a cliff face hat we noticed the handful of Common Swifts high above them.  And so the turn off at the Charca del Negra where we had our first close sightings of the local Rock Sparrows.  On the opposite side of this track, just beyond the huge laming shed, a close view of a most handsome Black-eared Wheatear.  Strange ho, not so much the few Northern Wheatears, but that all the many Black-eared Wheatears observed were at the higher altitudes.

Now we were also coming across small flocks of Linnets, including those bathing and drinking in the lower pool at Charca del Negra, along with Stonechats, Crested Larks and a distant Blue Rock Thrush.  However, the bigger surprise was to see a Black-eared Wheatear posing on one fence top looking at a Whinchat on top of the next.  I can only imagine that this is a migrating individual which had dropped in for a quick rest and feed before carrying on northwards.

Moving on round towards the "Fossil cave" we added more Rock Sparrows along with a male Black Redstart.  Just a couple of Rock Buntings plus a single male Blackbird.  Time to retrace our steps and both Crag Martin and Barn Swallow were added to the sightings along with a very small charm of Goldfinches and a Mistle Thrush as we made our way down the mountain.  Our final stop was to call in to the lower quarry and see if the nesting Eagle Owls might be at home and open to visitors.  The nest home looked bare so no sign of the two owlets seen by Derek Etherton and company on Tuesday but John Wainwright had informed me that the adult was using the bush-fronted ledge above to roost.  Probably still too hot for the youngsters to come out and take a look at their new world but, using the scope, we could just make out the adult well concealed behind said bush.

We finally left for home and took the country road back to Zafarraya so that I could, hopefully, show Jenny the summering Montagu's Harriers.  Collared Doves on the way and once stopped just after the bend to look down on the cereal field we were rewarded with the sight of two males and a female Montagu's Harrier quartering the field whilst, high above, a lone Raven drifted across the sky.  What a way to end the afternoon. 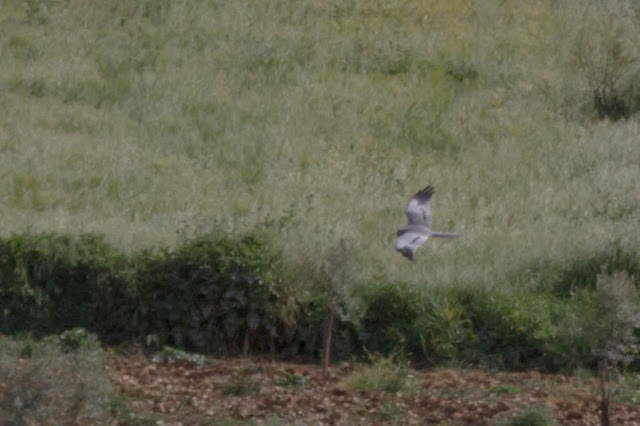 Check out the accompanying website at http://www.birdingaxarquia.weebly.com for the latest sightings, photographs and additional information.
Posted by Bob Wright - The Axarquia Birder at 01:21