back in the UK this week and I had hoped to have at least one day at my local patch, Rutland Water.  Funeral and paperwork follow-up most of week and Thursday dry and mainly sunny but with more rain due on both today and tomorrow I had to put the domestics first so washing and ironing sorted.  (I'm going to make a great wife for somebody with all this domestication!)  But enough of this; I'm going stir crazy so drove over to Rutland Water in the, now, light rain and spent just over an hour at the main Visitors Centre checking out nearby fields and adjacent hide.  Not bad to reach almost forty species then a quick drive down to the bridge overlooking the feed into Manton Bay which revealed about a score of Tufted Duck along with Mute Swan and Great Crested Grebe plus the nest-sitting Osprey and visiting male.  Also helped to pick up a pair of Magpie as I departed to take the final tally up to 41 species in under two hours.  Now home and starting on this blog and it looks as if it might finally be clearing up - for now.


Approaching the site I had many Woodpigeon and Carrion Crow along with Blackbird and my first Barn Swallow of the day.  A short stop at the Northern Arm produced many Greylag Geese, Cormorant, Heron, Tufted Duck and Great Crested Grebe along with the resident Mute Swans.  A Common Tern was resting on a fence at the side of the water and further study produced more individuals including a nesting platform.  I even had an adult and couple of juvenile Pied Wagtails feeding on the damp road.  With a couple of Back-headed Gulls flying overhead I looked in the final field before Egleton to see the local Jackdaws and also found a single Oystercatcher feeding in the grass.   Sitting in the car park, in addition to the resident jackdaws a lone Mistle Thrush was feeding on the ground immediately in front of me and there was a handful of Common Starlings in a bear tree behind me.

So off to the Visitors Centre to make use of their scope so that I could leave mine in the car and out of the rain.  Another Pheasant close by and a male Chaffinch in front of me, not to mention all those Jackdaws.  From the Visitors Centre I could see a good number of both Canada and Greylag Geese along with Tufted Duck, Mallard and a single Shoveler. A single Little Egret was hiding in the long grass and certainly no shortage of Black-headed Gulls along with a few Lesser Black-backed Gulls and the odd Herring Gull.  Whilst I did see plenty of both Barn Swallow and House Martin by far the majority of hirundines were the Sand Martins using the artificial nesting bank.  A handful of Common Swift dashed low across the water before I moved on.

Back at the hide overlooking the feeding area there was a constant movement of both Blue and Great Tit along with the occasional visiting Chaffinch, the odd Goldfinch and a single adult male Greenfinch.  Lovely to see Dunnocks again and both juvenile and adult Robin.  Even a pair of male House Sparrows put in an appearance.  At the back a number of Jackdaws were taking advantage of the food on offer and completely ignored by the pair of Moorhen on the small pond.  The a flash of red and I was entertained to a feeding Great Spotted Woodpecker.  Got in a few photos before it was chased off by the Jackdaws but returned to feed on a closer feeder; lovely for me. 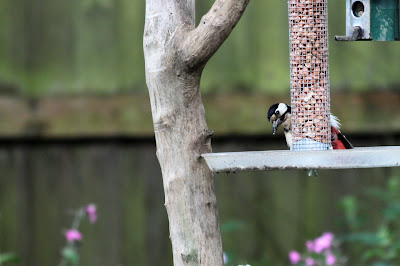 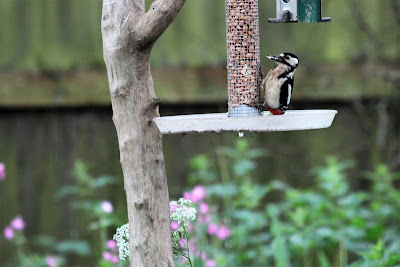 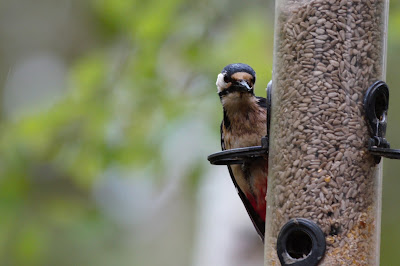 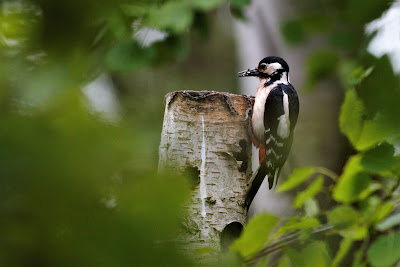 And then, as described in the opening paragraph, it was off to see one of the breeding pairs of Osprey and also recording a pair of Magpies.  Still a light drizzle when I got back to Stamford and now, well into the evening, it is only just starting to clear up but with more showers promised for the morning.

More photos from a very damp Rutland Water this morning: 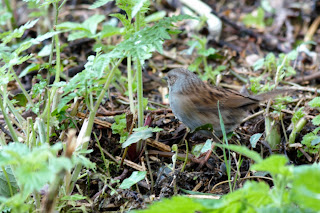 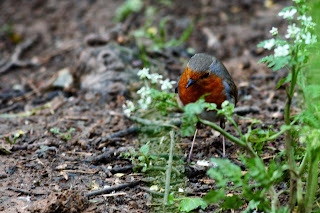 
Check out the accompanying website at http://www.birdingaxarquia.weebly.com for the latest sightings, photographs and additional information.
Posted by Bob Wright - The Axarquia Birder at 14:35