La Janda with the ABS

It was cool and early light when, with Marieke, I set off for the car park adjacent to the Isla de las Palomas in Tarifa where we should have been having the privilege to visit said island for some fantastic sea-watching.  The meet had already been cancelled a couple of days previously due to the forecasted severe, not to say storm force, winds.  So, 37 disappointed members but eleven of us did turn up to meet our guide for the morning, Javi Elorriaga of Birding the Strait, to prepare for the alternative site, La Janda.  Just as well the meet had been cancelled as the winds were steadily increasing and a couple of members who had visited the area the day before found a Police Local presence to prevent the public from accessing the causeway as waves were breaking over and the severe wind was threatening to blow pedestrians over the side!

So off we twelve went and, on arrival, sorted ourselves out into just three cars.  By now the sun was u, it was getting warmer and warmer but there was still a strong wind with which to contend.  The close fly-past of a Peregrine Falcon as we left Tarifa was to be repeated later on in the morning so that we were greeted on site by Spotted Starlings,Stonechat, Crested Lark, Goldfinch, both House and Spanish Sparrows and, towards the canal, a number of Sky Larks.  As we looked around us we could see many Cattle and Little Egrets along with the first of hundreds of White Storks.  Not just Jackdaws moving around the area as we started down the long track but a handful of Barn Swallows flew past including a couple of Red-rumped Swallows in their midst.

Cetti's Warblers calling from the river bank and a Green Sandpiper in the ditch whilst a few Serins were active in the weeds and a lone Mallard paddled across the river.  The first of a number of Marsh Harriers put in an appearance and then seemed to be ever present even if, at times, they were quite distant.  One of the wider drainage channels on the far side of the river produced a feeding White Wagtail and on the water was a score or Mallards along with about a dozen Teal.  And just where we had seen the two Cranes fly over us yesterday we found them feeding at the back of the field near a small group of White Storks.


Whilst a few Meadow Pipits worked the track a Cormorant flew past and, looking up, we even had a Spoonbill fly over.  By now we had reached the bridge on the bend and were regularly noting more Grey Herons along with the White Storks and egrets not o mention a fairly close Great White Egret.  Then the Black-shouldered Kite appeared, worked the cotton fields on the other side of the water and came to rest in a nearby dead tree.  Lovely views in the air as I made my way along the track to take a closer photograph but the "shout" went up the at the bird was in the sky once more. Naturally, I turned back and as I did so the bird left its tree; there were two Black-shouldered Kites working the area so I had to rely on the aerial shot in blustery conditions.

Black-headed, Yellow-legged and Lesser Black-backed Gulls on the muddy swamp resulting from turning in the rice stalks along with Lapwing, storks, egrets and herons we continued on to the main road and back in the hope that we might find either the visiting Great Spotted Eagle or Pallid Harrier. We were not to be so lucky.  We did have a Zitting Cisiticola and on the return journey both more Marsh and a male Hen Harrier.


Then it was over the bridge and up towards the "smelly farm" and, for me, a long stop to have a chat with my dear friend Andy Paterson who happened to be parked up on the far side of the river. Working our way towards the farm we naturally picked up both Pheasant and Red-legged Partridge followed by a rather lovely Booted Eagle.  Lots of Rock Doves and Jackdaws around the farm and searching the distant fields and hills we noted our first Griffon Vultures of the day.  Regular Kestrel sightings as we made our way to the end of the road before taking a left turn to check the stream where we recorded a Little Grebe and a few Crag Martins.

To finish the day we reversed and took the pot-holed track towards Fasinas with Robins singing away to our left and both Corn Buntings and Stonechats seen on the fence wires along with the regular Crested Lark.  We also had occasional small charms of Goldfinches feeding on the thistles and even a Yellow Wagtail whilst stopped for the big moment of the drive.  Not just Kestrels but a large, distant eagle.  We were able to get closer and observe a might male Spanish Imperial Eagle which was soon joined by a smaller immature female.  Evidently the pair had unsuccessfully tried to breed this year which certainly promises well for 2017.this year.  Indeed, whilst watching the aerial display of these magnificent birds a couple of the group also had a fleeting sight of a Merlin as it dashed up a narrow hollow in the ground and was gone.  What a way to end the day and make our way back to the parked cars and onwards to our respective destinations. 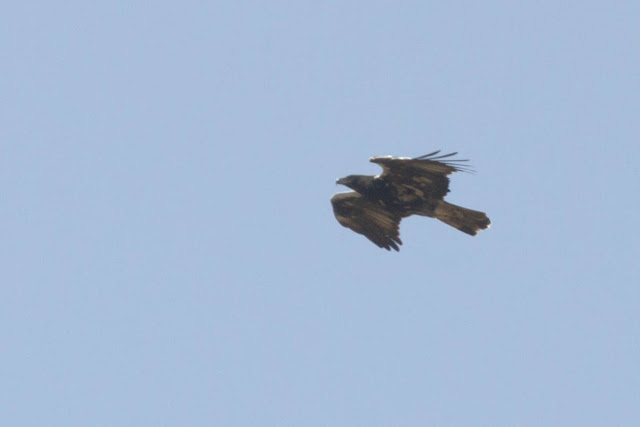 
Check out the accompanying website at http://www.birdingaxarquia.weebly.com for the latest sightings, photographs and additional information.
Posted by Bob Wright - The Axarquia Birder at 02:35