A sort of belated October field visit by the Axarquia Bird Group after all the trials and tribulations of the past month so, after dropping Jenny off ofr her daily physio session in Torre del Mar, Bryan Stapley and I drove down the church at Guadalmar where we were soon joined by James Moore, Brian Wilkinson and Gerry Collins.  Then it was on to the Guadalhorce reserve where we could see numerous Cormorants in the distant Laguna Grande plus one feeding to the left on the river.  Also present were at least seven Grey Herons and then we fond the resting Booted Eagle.  So over the footbridge were we came across Paul Coulthard and so on the far aside and the Laguna Casillas. Here much to my surprise and delight we found John and Jenny Wainwright and within a few minutes we were up to ten members for the morning.  John and Jenny had been on site for about an hour so were soon able to fill us in with the birds they had seen and we had missed!

On the water itself we had mainly White-headed Ducks along with a few Little Grebes, Coots and Pochards.  A Kingfisher seemed happy to plash up and down the water giving good views to most and no sooner had all watched the passing Osprey when first, then a second Booted Eagle decided to put in an appearance and happily perched on the bare tree on the opposite bank.  Wonderful views. 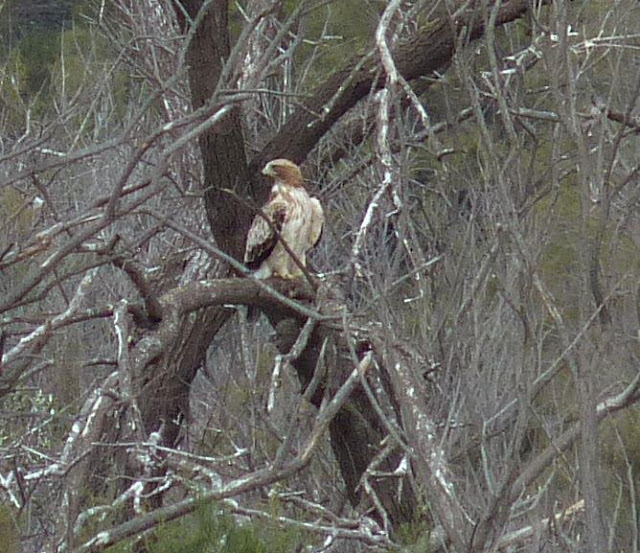 Next it was on to the Wader Pool where we found no less than twelve Flamingos along with  a small number of both Teal and Mallard and a single Redshank.  In addition a few Black-winged Stilts, a couple of both Moorhens and Snipe and a singe Blackbird.  Immediately below the hide we watched a feeding Meadow Pipit whilst behind us both Great Tit and Sardinian Warblers were seen and on the distant trees in front of the Laguna Grande so many roosting Cormorants that hey looked like lanterns complete with a topping of Spotless Starlings.

At this point I left the group to drive into Malaga city where a very dear birding friend had kindly arranged to meet me at the main hospital to look at my "damaged" eye and offer advice and potential treatment. What more can I say than I was so impressed and appreciative that, despite the worry about the forthcoming operation, I can now look forward to having great vision to prepare for the arrival of the summer migrants.  Wonderful news for me and so much appreciation and gratitude for the opportunity.

Meanwhile, the remaining members continued their tour of the site and very many thanks to John Wainwright for both sending in the following report and including some lovely photographs taken during the morning.

We arrived a bit early at the meeting place so we decided to take a very slow walk to the first hide (Casilla), en route we saw along the estuary at least seven Grey Herons and several Greater Cormorants, Rock Doves, Jackdaw, Cetti´s Warblers and Monk Parakeets. Several Robins, Blackbirds, a few Serins and House Sparrows, Zitting Cisticolas and a couple of Sardinian Warblers were noted as we progressed through the canes and up onto the embankment.

As we approached the Casilla hide a small group of seven Sand Martins flew through, while from the hide we saw Teal, White-headed Ducks, Pochard, Shovelers, Mallard, Little Grebe and Moorhens. Our only short sighting of a Bluethroat was had here as well as Chiffchaffs, Goldfinches, Stonechats and Crag Martins.

Across the other side of the reserve a Booted Eagle was spotted as it landed in one of the trees lining the river - the group saw it from the track leading to the bridge so I am told.  A couple of Great Tits flew in to the bushes to our right as a Common Buzzard came low across the reed beds.  A flash of colour in a bare tree across the pond here gave us our first Kingfisher of the day.  This bird kept dropping into the reeds below then flying off, but returned three times while we were here.

As we were joined by the group an Osprey gave us some fairly good views, but didn´t hang about here long, but we did have close views of two Booted Eagles, one landing in the Kingfisher tree and the other about 300 metres to the left in a slightly less visible location.

We all moved along to the Rio Viejo hide where good views of Snipe were had as well as Redshanks, Black-winged Stilts, a dozen or so Greater Flamingos, several Teal, Little Egrets, Moorhens, Little Grebe and good views of a Meadow Pipit were had, later we had a female Black Redstart here as well.

Then moving on to the old Viejo area we spotted a few waders, among them was one Grey Plover, a few Sanderlings, Ringed Plovers and Redshanks, while in and around here we noted more Meadow Pipits, Black Redstarts, Goldfinches, Sardinian and Cetti´s Warblers and three Blackbirds.  Above us Black-headed and Yellow-legged Gulls were seen as were Greater Cormorants. Another Booted Eagle was noted sitting to the left of the old nest box in the bare trees in the distance.

As we approached the sea view building a RIB put up a huge raft of gulls and apart from this there was only four White Wagtails seen on the sands to the left of the hide, and a Common Sandpiper was seen flying.


On out way to the Escondida hide we saw a few more female Black Redstarts, but nothing different from what we hadn´t already logged.  As we neared the Escondida hide a beautiful Spurge Hawk-moth caterpillar Hyles eurphorbiae was spotted by Jenny; its coloration is supposed to warn off predators as its host plant (euphorbia) is fairly toxic.  At the hide a Kingfisher flew back and for across the laguna several times, while at the back of the laguna we noted Gadwall, Mallard, Teal, Shovelers ( among them a very leucistic bird ) and a Little Egret.  A group of Black-tailed Godwits flew over heading for the Laguna Grande.  Two Marsh Harriers quartered the reed beds here putting a few of the ducks to flight and a Grey Heron came across the laguna a few minutes later.


So onto the last leg of the journey to the Laguna Grande.  Here we met up with several of the group. We located the Black-tailed Godwits (from over the previous hide), directly to our front as well as good numbers of Black-headed Gulls, three Slender-billed Gulls, but only five Yellow-legged Gulls were counted here.  In a small pool below the hide a Common Sandpiper, a Redshank and Ringed Plover were logged, while a bit later a Little Stint flew in.

Masses of Greater Cormorants here in the trees, as well as Cattle Egrets, and a few in the laguna itself along with Grey Herons, seven Shelduck, Little Egrets, Coots and Moorhens were also seen. Spotless Starlings, Collared Doves were spotted in the trees to the left of the hide as well as a very pale Booted Eagle, which had prey under it´s left foot, and was calling repeatedly.  We later found the other Booted Eagle still perched in the bare trees next to the old nest box along with more Greater Cormorants - this is the one - I believe - that we spotted from the Old Viejo area earlier on in the day.  (Gerry and Bryan also found a couple of Spoonbill behind the island with the dead tree on the far right-hand side and also recorded a Green Sandpiper.)

On our walk back to the car we located the Osprey again, as well as a Song Thrush and four  Greenfinches.

A very rewarding days birding in my eyes.

Just look what I missed whilst undertaking my treatment in Malaga but, there again, with my one good eye there was every chance that I would have missed many of these lovely birds.  It looks like a minimum 57 species in total.  To John and Jenny very many thank for your help and support.

Check out the accompanying website at http://www.birdingaxarquia.weebly.com for the latest sightings, photographs and additional information.
Posted by Bob Wright - The Axarquia Birder at 11:55