A beautiful war, clear and sunny day for the afternoon visit to Charca de Suarez on the western outskirts of Mortril by the Axarquia Bird Group and well attended by 16 members, some of whom (even with two eyes!) I have not seen for over three months if not a full year or more.  With the reserve only open for to hours, many members took the opportunity to check out the neighbouring fields around "Turtle Dove Alley with John and Jenny Wainwright along with David Hird and Arthur Oliver recording at least a further seven species including Meadow Pipit, Red-rumped Swallow, Grey Wagtail, Bluethroat, Red Avadavat, Black-rumped Waxbill,  and Bonelli's Eagle.  Great sightings.  Whilst in the area we also recorded Greenfinch, Goldfinch, Stonechat, House Sparrow and Kestrel.

Most of us on entry to the reserve headed straight to the Laguna del Alamo Blanco in the hope that the Jack Snipe might be seen; we were not to be blessed on this occasion. We had a couple of Common Snipe along with Little Egret, Teal and a a pair of female Shovelers.  White Wagtails fiddled about at the back and a Stonechat and Kingfisher took it in turns to perch on a dead tree.  Overhead, the Booted Eagle previously seen in Turtle Dove Alley passed overhead and was followed by a couple of Buzzards.  However, for some of the group it was not so much the small flash of the Kingfisher as it crossed the water but, rather, the larger grey flash low across the water and finally into a tree at the back before disappearing for good of a Goshawk.  Almost certainly the same bird that was seen crossing the main laguna  less than a week ago.  Does this mean that we have the potential of both a wintering Jack Snipe and Goshawk in or near the reserve? 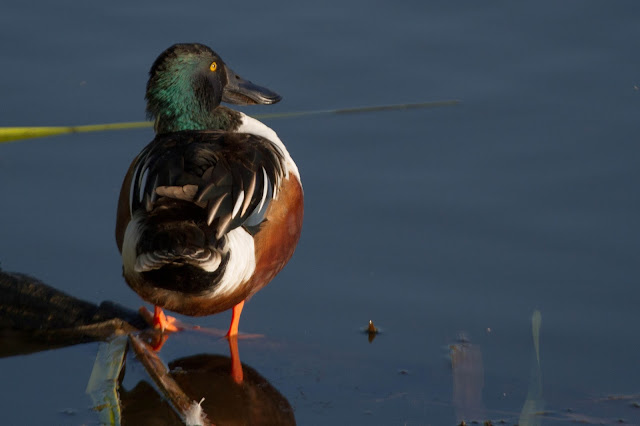 Leaving the hide we had a couple of Herons fly over and as we made our way to the main hide overlooking the Laguna de las Aneas we added Grey Wagtail, Robin, Cetti's Warbler, Zitting Cisticola and Chiffchaff.  Upon arrival we found that the juvenile Spoonbill and Flamingo were still present along with the single White Stork at the back of the water.  Also still on site was the single female Pintail. For the rest no shortage of ducks which were mainly Mallards along with a number of Pochard and Shoveler plus a Shelduck.  Whilst checking out the many ducks John Wainwright also managed to discover a couple of Wigeon.  The odd Little Egret scattered about and on the island along with a number of Cattle Egrets,  A few Cormorants present but still, I think, a little early in the season for the large numbers that will winter here.  Coots and Moorhen on the main water plus a few Little Grebe and a single, collared, Red-knobbed Coot was found at the back neat the White Stork. Overhead a small flock of Black-headed Gulls to accompany the Yellow-legged Gulls.  very few small birds other than the pair of White Wagtails and the occasional shout of a Cetti's Warbler.  Then, just before moving on, a lone Purple Swamphen wandered out on the left bank to work the edges.

A short visit to the Laguna del Trebol duly added two, non-collared, Red-knobbed Coots amongst their common cousins the Common Coot along with a few Moorhens and Mallards and a single Little Grebe.  To our side a pair of Great Tits were busy feeding on seed heads.  Leaving the hide to return to our original stop for a last look at the Laguna del Alamo Blanco for any late additions we looked up in time to see a small flock of passing Crag Martins and also recorded a Blackcap .  On arrival, with the setting sun almost directly in front of us, we not only had a brief, closer, look at a Snipe but a very short visit from a Green Sandpiper.  The single Little Egret continued to strut about whilst the Mallards and Teals sought out a suitable resting place for the coming night.

And so the visit ended with over 40 species recorded and we made our farewells for what, I believe, had been a very enjoyable visit and appetites whetted for a return at the earliest opportunity.  My thanks to all those who attended and look forward to seeing you all again in the very near future.


Check out the accompanying website at http://www.birdingaxarquia.weebly.com for the latest sightings, photographs and additional information.
Posted by Bob Wright - The Axarquia Birder at 22:15