As I said a few days ago, a change in weather and everyhing starts to happen.  Whilst John and Jenny Wainwright have driven down to the Donana National Park for a few days birding, Gerry Collins has just returned to Salobrena froma couple of days in Roqueta del mar where he picked up some very lovely Slender-billed Gulls - even if, as Steve would say, at least one was covered in avian bling!  For me, I have just arrived back in England for a week.  I may have landed in sunshine but by the time I collected the car it had completely clouded over and by the A1(M) I had a light drizzle and then a flurry of snow to welcome me back.  However, it did not last and I am now up bright and early, working on Spanish time to maximise the light, and trying to decide whether to make an early start to Frampton Marshes (will there be snow in the Boston area?) or pop down to my local patch at Rutland Water.  We shall see when I eventually get back.

A very bright & warm day but chilly and gusty winds every now and then.

En route to Donaña we saw Spotless Starling, lots of Black Kites & one Red Kite, White Storks, Woodpigeon and Common Buzzards.  We had to wait for our cabin to be cleaned, so we ran down to the El Rocio marismas.  A good amount of water about though still enough area for the waders, and here on the muddy verges we found a huge flock of some sixty or more Common Snipe, White Wagtails, Lapwings, two Cattle Egrets (in the grasses) and countless Glossy Ibis and Black-tailed Godwits. Over on the far banks were Greylags and above them over the trees and marsh area, several Marsh Harriers were seen.
On the water we had Spoonbills, Teal, Shovelers, Pintails, Black-headed and Yellow-legged Gulls, Grey Herons, Common Coots,  Little Egrets and White Storks.  In the reed beds or what is left of them we saw Goldfinches, House Sparrows, Blackcaps, Stonechats,Chiffchaffs, Great Tit and a Magpie. Lots of Barn Swallows about just now as were Spotless Starlings.
After getting settled in the cabin, we drove along to Acebuche, here we had coffee - hoping that a least two coaches of shouting teenagers would hurry up and go in for their lunch.  Our first sighting here was of a Dartford Warbler and another was heard in the bushes to our left, after this we saw Stonechat, Great Tit, more White Storks, Mallard, Azure-winged Magpies, several Barn Swallows and a House Martin, Moorhen, Snipe, Robin, Black Redstart, more Glossy Ibis and a very striking Southern Grey Shrike - with its pinkish blush showing well today.

Then back to Rocina where we were on our own.  Here we saw Little Grebes,  a Marsh Harrier, Little Egrets, Glossy Ibis, Coots and a nice sight was twelve Purple Swamphens in various locations to our front, also here we saw Grey Heron, Pochard and Shovelers. In the trees we spotted Blackbird, Great Tit, Robin,
Serins, Chaffinches and a Cettis Warbler was heard from within the reeds.

Back home for a bite to eat and then back down to the El Rocio marismas.

Not a lot more tonight except Greater Flamingos, three Avocets, Black-winged Stilts, Crested Larks, a Greenshank, a Common Kestrel and a Black Stork.  Two perched raptors were seen far across the main marisma but to distant for definite id.  As we parked up two Hoopoes flew out from the trees in front of our cabin.

Not a bad day, although had a touch of frost last night.
On the way to the centre, we saw Grey Heron, White Storks, Common Buzzards, Corn Buntings, Crested Larks, Chiffchaffs, Little Egret, Meadow Pipits, Barn Swallows were in good numbers today, the inimitable Spotless Starling, a Lesser Kestrel, Marsh Harriers, Common Magpies, Calandra Larks - one of these birds was a pure albino, Zitting Cisticolas were well represented and their song was ever present, Stonechats - on every bush, post and tree, Linnets - not so many of these birds, Goldfinches, hundreds of Cormorants -
sitting in trees, in the fields and in the watercourses, good flocks of Lapwings, one Black Stork, Mallard, a lone Northern Starling, Moorhens, Common Kestrel, a male Hen Harrier and oodles of Glossy Ibis.

Coffee at the centre and we were told of Short-eared Owls being seen, one Long-eared Owl  and a Bittern..but alas for us a big NO!!! ....

But ,whilst we were here we did see Purple Swamphens, Glossy Ibis, two Red-crested Pochard, Common Pochards, Little Grebe, Greater Flamingos, a Great Crested Grebe, Shoveler, Mallard, Common Coot, Moorhen, Greylag Geese, Black-tailed Godwits and Grey Herons.
On the way back - and in the opposite direction - towards Isla Mayor, we picked up, fifteen Purple Swamphens, over twenty Great White Egrets, lots of Little and Cattle Egrets, about thirty Common Cranes (the centre tells us they are in short supply this year as are Greylags), a ring-tail Hen Harrier, Black Redstart, Green Sandpipers and a few Spoonbills. A nice surprise was a tree full of Night Herons (over thirty birds),
and a Sparrowhawk which took flight out of the bushes at the same time as a Common Buzzard. 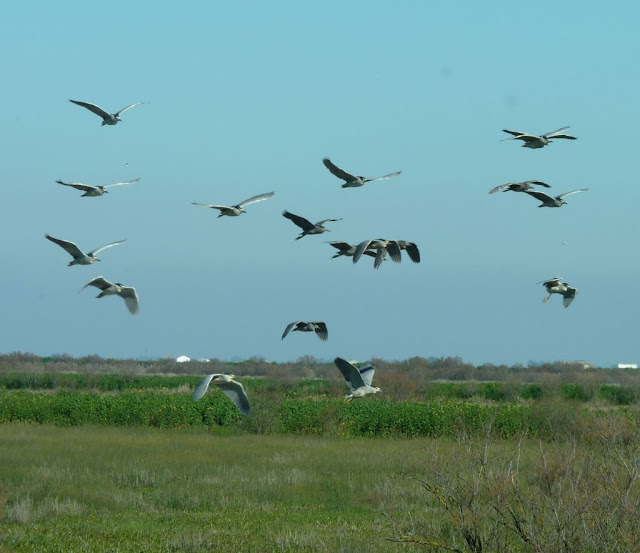 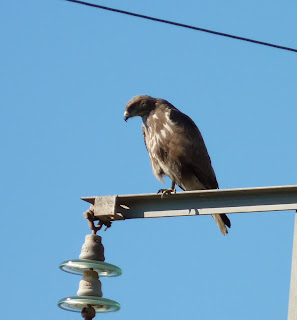 We dropped in at the El Rocio marshes and ascertained the large raptors we saw last night were the Spanish Imperial Eagles - perched in the old bare tree across the marshes, also here we had a good number of House Martins and a Praying Mantis to round it all off!!

Looks like John and Jenny area enjoying some fabulous birding but the mention of "frost" somewhat cheers me up as I was beginning to think they were in the sunny south whilst I was preparing to enjoy the frozen north!
Posted by Bob Wright - The Axarquia Birder at 21:35