A lovely clear and sunny day as I collected local birder Stuart Lightbody from Caleta and headed over to the Desembocadura del Guadalhorce in Malaga for a morning's birding.  We may be suffering a major drought situation in the province, especially in the Axarquia but there was certainly too much water at the Guadalhorce providing very little shore or wading area.

Lovey and quiet when we arrived until greeted by  a dozen raucous Monk Parakeets then quickly followed by even more.  On the opposite of the western arm a  couple of Kestrel in the bare tree before on to the river crossing.  Once off the bridge a Blackbird crossed in front of us and as approaching the eastern arm a number of Lesser Black-backed Gulls moving around above us.  Then we arrived at the Casillas Hide and all looked very quit at first other then a pair of Little Grebe.  However, taking a closer look we not only added a further two but also five Coot.  Sitting quietly in the reed below to our left was a Kingfisher and the old, dead tree on the right of the far bank held a resting Booted Eagle.  This bird remained for most of the morning until we finally saw it take off when re-visiting the hide on our return walk. However, it was not all peace and quit for the eagle as it was mobbed twice by a pair of Jays. In the vegetation below a number of Chiffchaff and both Mallard and Cormorant were seen passing over.

On to the Wader Hide where, again, too much water so no waders other than the dozen Black-winged Stilts.  Three Shelduck and a couple of Flamingos at the back of the water and a couple of Little Grebe to the right.  All of a sudden a great disturbance at the back where the Shelduck had previously been seen as an Osprey came into view followed by a male Peregrine Falcon.  No sooner had we recovered from the sudden sighting than the resident Marsh Harrier joined in the fun, obviously not happy that the Peregrine was in its territory.  Moments later we had Marsh Harrier, Peregrine and Kestrel in the same sighting.   The arrival of a Collared Dove to the island was somewhat of an anti-climax.

Moving on down to the Rio Veijo we had both Stonechat and many Greenfinch along with a handful o House Sparrows.  At the back of the river a quartet of heron but with so much water and little beach it took some time o find the Sanderling, Kentish Plover and Ringed Plover. A Common Sandpiper arrived to our right and was followed by three passing Barn Swallows.  A Green Sandpiper made a sudden dash round the back. On the opposite side of the track we found Crested Lark and Sardinian Warbler.  Continuing on towards the sea observation post we also found a Meadow Pipit and with the continuous quartering of the Peregrine Falcon a number of Goldfinch were put to flight.  Absolutely amazing and a privilege to watch the hunting peregrine but we did smile when it tried to take on a Lesser Black-backed Gull and then made a stoop on a passing Little Grebe which took evasive action by a rapid dive. 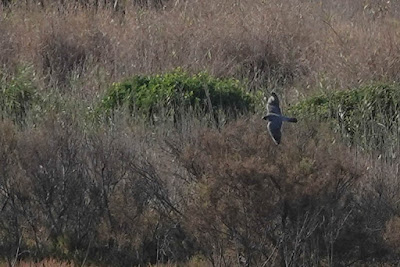 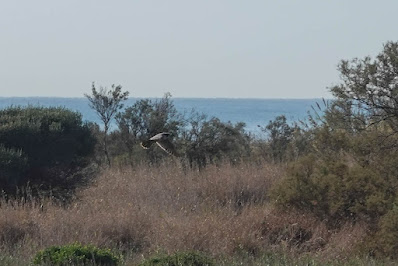 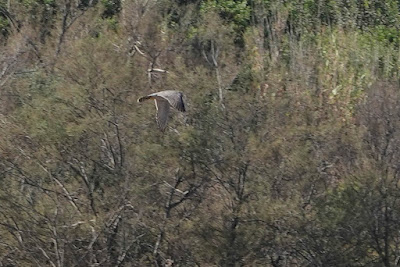 Nothing special from the Sea View other than the large resting flock of mainly Lesser Black-backed and small number of Yellow-legged Gulls.  Returning towards the previous hides we came across a pair of Zitting Cisticola closely followed by a couple of Serin plus many more Greenfinches.  And the Peregrine Falcon continued its pursuit of a tasty dinner - but, as far as we could ascertain, without any success.

Arriving at the Escondida Hide all seemed quiet other than a couple of Coot but then a Shoveler found resting under the tress but soon joined a further handful.  At the back  three White-headed Duck and a Moorhen swimming across in front of them.  But did see the Kingfisher that flashed across the water.

Our final stop was at the main hide overlooking the Laguna Grande with not only a White Wagtail on the track as we approached but a pair of Egyptian Mongoose made a hurried crossing.  Once settle in the hide we noticed the ever-increasing flock of Shoveler and a dozen Flamingo.  About a score or more Cormorant along with four Little Egret and another Heron.  At the back a trio of Shelduck and a Redshank.

In addition to the single Slender-billed Gull we also found sleeping Spoonbill and Greenshank. two Dunlin were feeding below to our right and also present a number of Black-winged Stilt, Ringed Plover and Sanderling.  We finally found the single Black-necked Grebe and the Osprey was quietly relaxing in a tree at the very back of the water.  The final arrival was a flock of Spotless Starling and brought our morning's tally up to exactly 50.

Posted by Bob Wright - The Axarquia Birder at 02:50