Having sorted tyre pressures in preparation for the long journey north next Monday at a tyre workshop on the Motril end of the Camino Patria. I moved back along the lane in search of the feeding finches.  Ere long a large number of Common Waxbill so continued on to turn the car to both take advantage of having the sun behind me and a closer contact with the birds upon my return.  Whilst turning the car I could not but help notice the handful of resting Cattel Egrets in a grassy field to my left.

Once back on site a few minutes later immediately a number of Goldfinch and a White Wagtail working the damp patch to my left.  A Kestrel drifted away on my right and then the sight of the small flock of feeding Tree Sparrows. Also in the vicinity both Stonechat and a few House Sparrows.  But right in front of in full display a couple of Black-rumped Waxbill.  Meanwhile, sitting atop a concrete post, a lone Cattle Egret and not sure, judging by the photo, whether it was using the post as a look-out or toilet facility!

Then minutes later on the adjacent Charca de Suarez reserve for a shortened ninety minute visit.  No sooner inside the gate and a number of feeding Chiffchaff noted.  Straight to the Laguna del Taraje where I found a long-resting Little Egret busily preening and a skulking Purple Swamphen working its way round the left-hand edge of the water.  Just the single Coot, a couple of Moorhen and a handful of Mallard before both a female and eclipse Shoveler hove into sight.

Missing out the next two hides I walked straight to the main hide overlooking the Laguna de las Aneas where I found many, but not so many as last week, Common along with a good supply of Red-knobbed Coot. No shortage of Mallard but Gadwall, Pochard and Shoveler numbers seemed lower.  However, no shortage of Moorhen but only a couple of Little Grebes recorded.  A few Herons at the back and just the one immature Night Heron eventually found resting in a tree at the far end.  In addition to a dozen resting Cormorant there were both Black-headed and Yellow-legged Gulls but mainly the former.

Nothing new to add at the Laguna del Trebol but walking the track from the norther to southern hide I found both Chiffchaff and a single Willow Warbler along with Robin, Cetti’s Warbler, Blackbird and Blackcap.

As I was about to leave the Laguna del Lirio I was pleasantly surprised to see the arrival of a Kingfisher. Them, leaving to make my way back to the exit and car, a Collared Dove in front of me and once standing outside the reserve I could see the large number of arriving Crag Martin and Spotless Starling above the apartment blocks that were, presumably, going to roost nearby for the night. 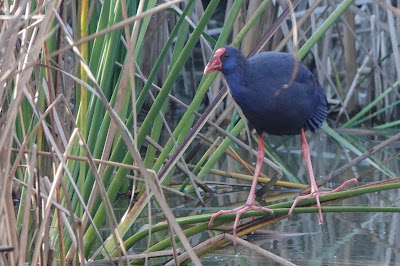 Posted by Bob Wright - The Axarquia Birder at 06:58