Dull and cloudy overhead as I set out for a couple of hours at the Charca de Suarez near Motril. Rather than the previous route which would take me via “Turtle Dove Alley” (now referred to as “tip Alley”) I drove towards the beach and entered the Camino Patria from the west.  Hardly a hundred metres later I stopped to check the House Sparrows feeding on the side of the road.  A flash of white as two small birds crossed o the tree adjacent to the feeding House Sparrows and then the Chaffinches joined the feeding.  Watching the Chaffinches I noticed that there was now also a handful of Common Waxbills in the feeding group and then the closest individual stretched up revealing itself to be an unexpected Black-rumped Waxbill.  Nice one.

A Kestrel crossed in front of me and moving forward I stopped to check what looked like a female Kestrel on the wires above and another small brown bird just beyond.  The Kestrel turned out to be a rather late Turtle Dove as seen by the rather blurred photograph taken through the car windscreen.  A closer look at the replaced small birds on the wire just beyond the Turtle Dove proved to be Spanish Sparrows with more in a mixed flock feeding below.  And so onto the Charca in time for the 9 o’clock opening and as I moved off a flock of at least a score of Cattle Egrets passed over heading towards the coast.

Once on the site a Collared Dove above and on to the Laguna del Taraje with a very loud Cetti’s Warbler calling.  Locking the car a spots of rain so I had put on a light raincoat but then the real stuff descended.  Fortunately, I had arrived at the hid in time but, on the other hand, it was the bamboo hide so the steady drippidy, drip, drip through the roof.  At first nothing to be seen then the arrival of a dozen Mallard and a couple of Moorhen.  Before leaving with the shower now completed and just the occasional spot, a Kingfisher arrived on site but well hidden in the reeds towards the back.

The “proper” shelter of the hide at the far end gave me time to record the species seen to date whilst outside on the water mainly Mallard along with a handful of Moorhen, a couple of Common Coot and two Purple Swamphen.

On to the Laguna del Alamode Banco where the hide was fully occupied by photographers.  Lots of water, very little sighting opportunity and the only birds to be seen a few more Mallard. Rather than straight to the main hide overlooking the Laguna de las Aneas I walked towards the back of the site and was rewarded by finding both Chiffchaff and Stonechat. TheCetti’s Warblers continued to call and were joining by the local Blackcaps plus a trio of Blackbirds that crossed the track as I made my way to the hide.

Approaching the hide a Robin and once inside I noticed the mainly Mallard and Common Coot occupation.  A little searching found a number of Moorhen plus a few Red-knobbed Coot and a quartet of Gadwall.  Continue the check of the water and surrounds I also added Little Grebe, Cormorant and a couple of Shoveler.  At the back of the laguna a Black-headed Gull was found on each perching post and then a Pochard followed by a pair of Ferruginous Duck.  To complete the sightings, a couple of Night Herons took to the air for a short circuit before returning to rest in a distant tree.

Leaving the site after a couple of hours I decided to return once again along the Camino Patria and no sooner having reached the back of the reserve a low level Booted Eagle passed overhead.  Once back to near my first stop of the day first another Stonechat then on a freshly watered field, near the edge, a large group of mixed sparrows including House, Spanish and Tree Sparrow.  A good way to end the morning. 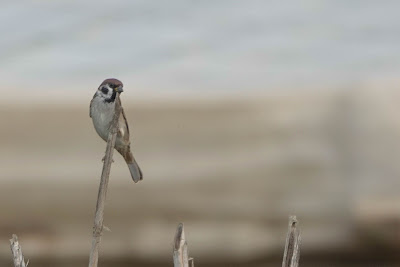 Check out the accompanying website at http://www.birdingaxarquia.weebly.com for the latest sightings, photographs and additional information
Posted by Bob Wright - The Axarquia Birder at 07:01