Having to visit both the Velez de Benaudalla apartment and my electrical supplier in Motril this morning I decided to go early so that I could spend a couple of hours at the Charca de Suarez.  And very worthwhile, too, it proved.  Taking the wrong farming road approaching "Turtle Dove Alley" I was "over the moon" to find a trio of Hoopoe, four Turtle Doves, Barn Swallow, Serin and Blackbird and once back on the correct connecting road also added Spotless Starling, Common Waxbill, Common Swift and Crested Lark.

Entering the reserve itself straight to the Laguna del Taraje where mainly Mallards along with a couple of Moorhen, Common Coot and a single Little Grebe.  House Martins overhead as I headed for the Laduga del Alamo Blanco and, surprise, surprise, the White Stork is still alive and kicking, well not actually kicking but legs below rather than above, and a few more Mallard.

A small group of Common Waxbill were feeding on the grass seeds and at he back a quartet of Little Egret along with a lone Glossy Ibis.  A pair of Moorhen drifted right to left and passed a Purple Swamphen travelling ion the opposite direction.

On towards the Laguna de las Aneas passing Blackcap and Cetti's Warbler, where I duly found very many Common Coot and a good number of Red-knobbed Coot.  More Mallard and a Little Grebe plus single Black-headed and Lesser Black-backed Gulls.  At the very far end to the right a well-concealed Cattle Egret eventually put up its head for identification.  In addition, no shortage of House Sparrows feeding on the grasses in front of the hide.

Having observed the Turtle Dove in the tree to my left, the dedicated spinney adjacent to the back gate was very productive this morning, first providing Goldfinch, the a pair of Greenfinch followed by a large family of Serin, a single Iberian Chiffchaff and a couple of Spotted Flycatchers.  Nothing new added from either hide overlooking the Laguna del Trebol, just more Coots of both variety, Mallards and another Little Grebe, albeit I did fund both Reed Warbler and Nightingale as I approached the entry track. 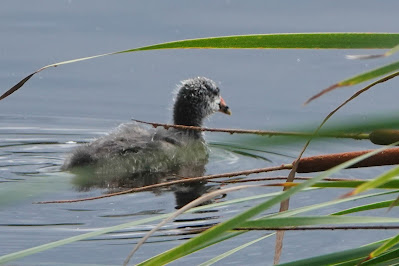 Check out the accompanying website at http://www.birdingaxarquia.weebly.com for the latest sightings, photographs and additional information
Posted by Bob Wright - The Axarquia Birder at 05:40