Just over five months (3 January) since my last visit to the Charca de Suarez on the western outskirts of Motril resulting from first the Covid travel restriction and then restricted access to the site in May once the provincial borders were opened.  It may have only been a short two evening hours on my way back to Mezquitilla from Velez de Benaudalla but, nevertheless, still a great pleasure to enjoy this lovely site.

Driving down "Turtle Dove Alley" is now an absolute disgrace with the ever increasing fly-tipping which has reduced this once fabulous birding site to a an absolute night mare as you try and avoid all the potential dangerous hazards that have spread onto the road itself.  Not surprisingly, not a bird in sight! One suspects that the birds have moved further south-west tot he area neighbour the connecting road (Camino Patria) that passes the end of Turtle Dove Alley.  Future visits will see me take a turn right after exiting the roundabout beneath the N340 and then left to take in the neighbouring fields before re-joining the main road just beyond the petrol station having passes the rear of the reserve.  In my case, this last part of the above road passes the House Martin "hotel" where the breeding colony is still active with, no doubt, most of the inhabitants making use of the reserve for their daily feeding sorties.  Nearby, in addition to those seen within the reserve itself, no shortage of House Sparrows and also a couple of Collared Doves.

No sooner inside the reserve and heading for the bamboo hide overlooking the Laguna del Taraje and my ears were being blasted by the high volume singing Nightingales.  The first of many Blackbirds crossed the path in front of me and once in the hide just a single Little Grebe and Red-knobbed Coot plus a score of Mallards. Searching the water and edges I eventually found a couple of Moorhen along with a pair of Common Coot with a couple of chicks.  In the scrub below me to the left a Cetti's Warbler and all the time the continuous song of a Turtle Dove which appeared to be directly overhead.

Little to be seen from the bottom hide so over to the large hide overlooking the Laguna del Alamo Blanco where, immediately in front of the hide, rested a juvenile Night Heron on the perching post.  The sun was in the right direction but, evidently, this youngster preferred to warm its back so necessary to get a head shot meant moving to the side which brought both obstructions and the wrong lighting.  A single Black-winged Stilt rested at the back of the water whilst overhead there regular feeding passes by a few Barn Swallows and the ever-present House Martins. 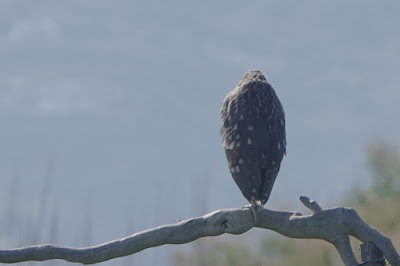 Approaching the Laguna de las Anas I could hear singing Reed Warblers and above a trio of Common Swifts and a couple of Lesser Black-backed Gulls.  The water itself was full of mainly Mallards in a range of eclipse plumages along with the Common Coots and the odd Red-knobbed Coot.  Just the single Cormorant but also a few more Moorhens.  No sooner had I found a distant Purple Swamphen at the far left-hand of the pool than a male Little Bittern flew across the water from left to right - but seen by all present.  Closer to the hide, a visiting male White-headed Duck was happy to pose just off the island and have his photograph taken.

The visit to the northern hide overlooking the Laguna del Trebol produced more Mallards and a a handful of Red-knobbed Coots including chicks and then it was round to the southern end where the hide made a great vantage point for watching the male Little Bittern successfully searching for his supper.

With time just about u only time for a cursory check of the Laguna del Lireo, more Red-knobbed Coots, and then off towards the road at the back of Turtle Dove Alley where I noted more Collared Doves but also found a small flock of Common Waxbill including  one individual that refused to leave the road until it had well and truly taken onboard sufficient grit.  A pair of Spotless Starlings nearby and it was time to head off home.

This is the way a hungry Little Bittern Ixobrychus minutus catches his dragon-fly dinner! 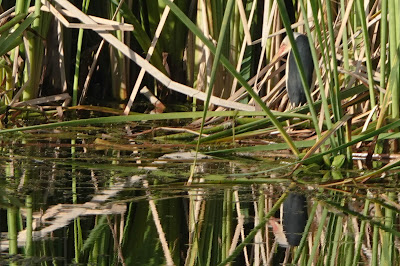 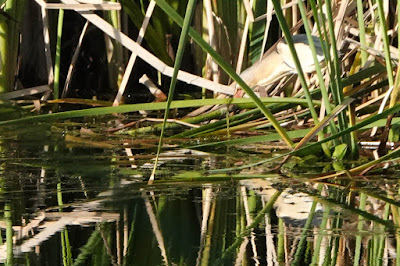 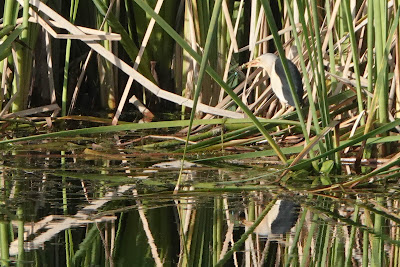 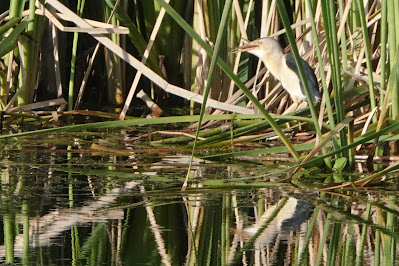 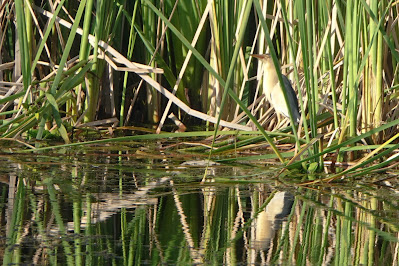 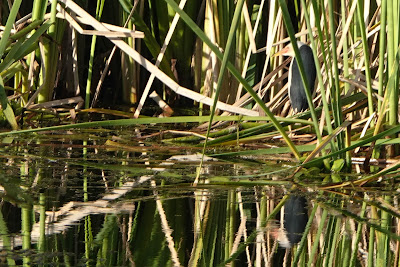 Check out the accompanying website at http://www.birdingaxarquia.weebly.com for the latest sightings, photographs and additional information
Posted by Bob Wright - The Axarquia Birder at 01:41