A short, forty-five minutes walk around Las Campinuelas produced a total of  sixteen species along with the Pallid Swifts and House Martins already seen in Algarrobo Pueblo as I set out for the adjacent site.  No sooner had I arrived than I had added Blackbird, Goldfinch and House Sparrow and as I set out on my anti-clockwise circular walk I soon also added Hoopoes and Collared Dove. 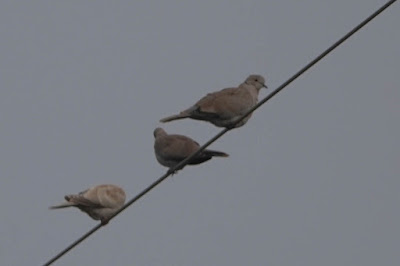 Near the old ruins to the far right, just beyond the spring, a Red-legged Partridge was resting up against the fence.  No sooner than I had seen the first pair of Crested Larks than i was to finally record a further dozen or more.  Overhead Barn Swallows were flying around along with a number of Common Swifts.

No shortage of Spotless Starlings moving around the area totalling well over an hundred then the sight of a handful of Monk Parakeets feeding at the top of a couple of fig trees.  In the sandy area around the scrambling area where most of the Crested Larks were found, a female Stonechat and a Corn Bunting.  Crossing the road for the final walk I was aware of the Bee-eaters on the wires in front of me as a Tawny Pipit bid a hasty retreat immediately in front of me.

Check out the accompanying website at http://www.birdingaxarquia.weebly.com for the latest sightings, photographs and additional information
Posted by Bob Wright - The Axarquia Birder at 10:38