At 8.25 I was at the car park below the mountain drive up to the El Torcal Visitors Centre where I met up with friends Derek and Barbara Etherton along with Mick Smith having already recorded Little Owl, Crested Lark, Barn Swallow, House Sparrow, Goldfinch and Serin as I passed through nearby Villanueva de la Concepcion as I approached our rendezvous, all of which were to be seen again during the next three hours of our birding in this fabulous setting.  Indeed, with cruises cancelled and restrictions on movements it was a (selfish) joy to have this fabulous site to ourselves without the often accompanying coach loads of noisy tourists.

Almost an hour was spent in the area before we started up the hill and whilst there recorded some fabulous sightings not least of which was a gorgeous male Cirl Bunting at close quarters.  Lots of Melodious Warblers along with Bonelli's, Sardinian and Willow Warbler plus a passing Lesser Kestrel high overhead and in and out of the shrubs and small trees numerous smaller birds including Stonechat, Linnet, Greenfinch and Nightingale.  I think Barbara was the only one to see the Corn Bunting below us but at least another individual as we were departing at the end of our stay.  Other sightings included Woodchat Shrike, Spotless Starling, Great Tit and Collared Dove.  Another surprise was the sighting a Black-eared Wheatear.

Moving up to about half-way we stopped at our favourite site to see at least five of the expected Subalpine Warblers.  First Rock Sparrows on the high cliffs the we added Rock Bunting, many Blue Rock Thrushes, Black Wheatear and Black Redstart.  Choughs passed overhead as did about a score of Bee-eaters and then, for me, the delight of hearing then finding a Wren.

Continuing on upwards we then added a Common Kestrel and a pair of Griffon Vulture.  Once at the top more Blackbirds, Black Redstarts and Rock Bunting along with a Blue Tit before we found both Subalpine and Melodious Warblers just beyond the Visitors Centre.  Away high in the distance we could see the occasional Griffon Vulture which led us to find the feeding swifts, mainly Common but also more than a handful of Alpine Swifts.

A Thekla Lark was feeding nearby and on our stop on the way down near the ruined farm we found a Little Owl, Stonechats and Red-legged Partridge.  Whilst there we had a magnificent view of an overhead Bonelli's Eagle. 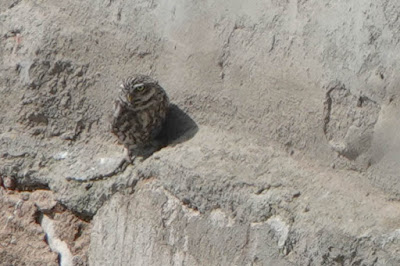 Having departed we then drove over to Fuente de Piedra knowing that the recent rains might well have brought more water to the site.  Approaching the entrance no shortage of House Martins and Sparrows around the houses and the White Stork was sitting proudly atop its nest on the top of the tall chimney.  A Raven flew over the entrance and now lots more water on the, once again, flooded entrance field on the left which duly produced Little Ringed Plover, Black-winged Stilt, Redshank, Avocet, Common Sandpiper and Shelduck.  To our left numerous Reed Warblers were singing along with Cetti's Warbler and a couple of Zitting Cisticola and Barn Swallows fed over the water.  First a handful of Black-headed Gulls then the arrival of the Gull-billed Terns before, having found an Iberian Yellow Wagtail, we continued up to the car park.

Making our way to the back and the Laguneta we stopped to check the gathered birds away to our far right where we could identify, with the help of scopes, Ringed Plover and Dunlin along with more Common and a single Spotted Redshank.  Not just very many Gull-billed but also at least half-dozen Whiskered Terns were resting on the sands near a small group of Flamingo and more Shelduck.  Moving to the mirador to check the Flamingos on the extreme left we duly found a couple of Lesser Flamingos in their midst.  Jackdaws were flying around the area and the singing and calling of the numerous Nightingales was almost deafening.  To the right of the main Flamingo flock we also found seven resting Heron.

So on to the Laguneta where there was water a plenty.  Mallard, Shoveler, Gadwall and White-headed Duck were added to the day's list as were both Common and Red-crested Pochard. Then what we were really looking for; the newly introduced Marbled Duck. Sixteen individuals had recently been released from their holding pen and three nest boxes installed on the various islands.  We found a couple near the pen and then the sight of six flying around the area. Let's hope they stay and become a viable breeding flock.

Also present were a number of Coot and Moorhen along with Little Grebe, a Purple Swamphen, Avocet plus more Black-headed Gulls and Gull-billed Terns.  A trio of Lesser Black-backed Gulls added to the mix and above the buildings on the far side we could see many Rock Doves and Spotless Starlings.  A Serin was feeding immediately in front of the hide and a small number of Bee-eaters flew over as we departed.

As we left the site to take the track between the back of the railway station and the reserve the others also found a Curlew Sandpiper on the flooded field and, once round the back, we were able to add Collared Dove, Greenfinch and Woodchat Shrike.  Interestingly, given the restrictions on travel to visit certain sites, as I passed beyond Antequera at the top of the hill on the way home an Azure-winged (Iberian) Magpie flew across the road in front of me.  So ended a wonderful day with almost 80 species recorded.

Posted by Bob Wright - The Axarquia Birder at 10:00