Now that we are allowed back out to play, time to see what birds can be found in the suggested one kilometre from home and within the hour.  Also time to catch up on what friend, Eric Lyon has been seeing from his balcony as he looks down on the trees in the gardens below.  Yesterday's walk up the Rio Algarrobo to the motorway and back produced some lovely birds including Spotted Flycatcher and Green Sandpiper so with, hopefully, many people now back at work there might be more about when I repeat the walk, this time with the  company of Jenny.  And disappointed we were not.

Starting by checking the beach where I found a single immature Mediterranean Gull and a handful of Rock Doves it was then up to the main road and across to take the track up the river through spinneys and parkland.  As soon as we crossed the road we had a male Blackbird and once into the trees numerous House Sparrows and Monk Parakeets.  Looking across the river bed to the apartment blocks, not so many Pallid Swifts albeit possibly because of the current warm weather the swifts might now be much higher than at the same time yesterday.  Only the occasional distant House Martin but far more Goldfinches and Serins.

As the Blackbirds busied themselves we had a sudden flight of a lone Hoopoe in front of us as it headed towards the dry river bed.  As expected, no shortage of Collared Doves with constant calling and then  different call as the telephone started warbling; where was it, could it be a first for the year?  Yes, near the top of an old, bare tree, my first Turtle Dove.  And the bird remained long enough for good views by both Jenny and I before eventually departing.

Continuing on up the track with regular sightings of both Goldfinches and Serins along with a good number of Blackbirds and very many House Sparrows, we eventually had a supply of Barn Swallows and a couple of House Martins.  Unlike yesterday, there were very many Monk Parakeets on view and today we actually walked under the motorway to see if there was a continuing road on the other side, there was, before we turned for the return journey.  But not before noticing that a small colony of Crag Martins were nesting on the concrete supports of the motorway bridge.

Nothing new to add on the way back other than a few more Spotless Starlings and a better view of the Wood Pigeon seen on the outward leg of the journey.  Rather than head straight home, I followed the river almost to its end so that I could use the footbridge to check out the estuary and beach.,  Almost dry now with just a small "puddle" this side of the beach on which a single Ringed Plover was foraging and, on the sea, a lone Black-headed Gull.

Wandered down to the footbridge at 4.30 pm and noted that there were now 3 Ringed Plovers and a pair of Red-rumped Swallows collecting mud for nest building.  Before returning home I also observed a male Sardinian Warbler, White Wagtail and single Cormorant.  In between, my walk down to Caleta harbour produced a small mixed flock of gulls, mainly Yellow-legged and Lesser Black-backed but also significant numbers of Audouin's Gulls.  In addition, working the beach, a single Sanderling.

Meanwhile, I had news from friend, Eric Lyon down in Torre del Mar of what had been putting in an appearance in the trees of the communal garden below his house.  Most impressive to see that he still has both Spotted Flycatcher and Woodchat Shrike as well as the usual Blackbirds, Monk Parakeets, Collared Doves and House Sparrows.  On the other hand, unlike me, Eric is now also continuing to see the arrival of a number of warblers. This month he has recorded Melodious, Bonelli's and Willow Warbler along with, I think, at least one late Chiffchaff.

The photographs below are of the warblers taken by Eric on a small pocket camera from the house.  I think they show, in order, a Melodious followed by a late Chiffchaff then four Willow Warblers.  But please do get in touch if you think otherwise.  Many thanks to Eric for sharing his sightings. 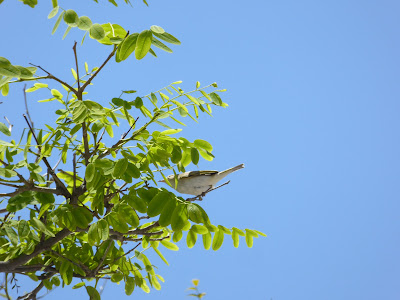 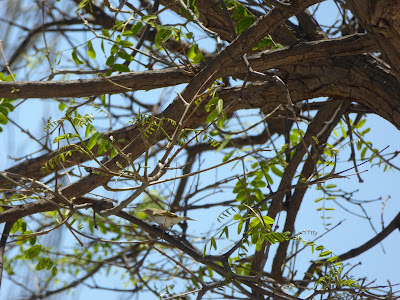 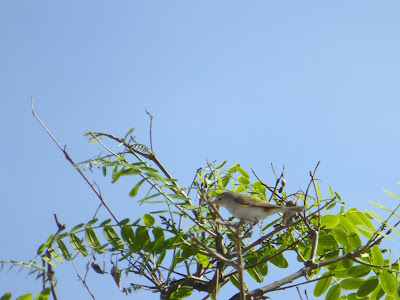 Check out the accompanying website at http://www.birdingaxarquia.weebly.com for the latest sightings, photographs and additional information
Posted by Bob Wright - The Axarquia Birder at 06:51