Two days in Almeria province with the first spent west of the regional capital, initially at the industrial site of Las Norias followed by the extensive Salinas on the outskirts of the beach resort of Roquetas de Mar. Arriving at the extensive “lake” amidst the vast quantities of plastic greenhouses that is Las Norias I was somewhat surprised to see how devoid of bird life the area appeared.  Yes, Spotless Starlings and a White Wagtail as I approached my first stop on the roadside near the pumping station with just the odd Cormorant, a few Black-headed Gulls and a couple of Black-necked Grebes followed by a handful of House Sparrows.  A good supply of Chiffchaffs feeding in the neighbouring hedges.  Rather than waste time on to the plastic recycling plant and park up near the bridge.  Not much better here but plenty of Collared Doves near the farm along with both House Sparrows and White Wagtails.  A few Coot and even a couple of Little Grebe in addition to more Black-necked Grebes.

A move further along to the grass field on the left produced a single Grey Wagtail and Hoopoe plus Meadow Pipits, and a few Stonechat whilst on the water viewed from the far corner a pair of Shoveler and a single Little Egret.  All very disappointing so on onwards Roquetas and passing by San Antonia I came across a large feeding flock of Spotless Starlings which contained a number of Common Starlings.  On the post and fields more Stonechats along with a resting Kestrel.
My first stop was in the area leading towards the lighthouse.  A number of Flamingos and Lesser Black-backed Gulls were noted along with a couple of Mallard.  At the far end I could also pick out Cetti’s Warbler so back to the main road to check out the ponds approached from the nearby sharp bend in the road.  Crested Larks and then when I came to a stop in front of the extensively flooded track I actually watched a Kingfisher leave its perch on one side of the track and fly to the opposite side before returning further away; rather a pleasant surprise.

Next stop was the large fresh water lake, passing many Stonechats on the short drive, and here there was to be plenty of bird life with hundreds of Coots and scores of ducks.  Mallard near the edge to my left and a little further back a large flock of Common Pochard and a few Red-crested Pochards.

To their left the main Gadwall flock and a few Teal and then a scope to the rear of the water produced dozens of Shoveler and a small number of Wigeon.  Mainly Yellow-legged and Black-headed Gulls on the water and nearly all put up as a female Marsh Harrier drifted over the water.

Entering the main track through the Salinas I made a stop at the hidden pond where, in addition to a few Coot, I found a single Night Heron and a couple of Spanish Sparrows.  As I returned to the main track a single Robin sat on the track and watched my passing.  Not a single bird seen on the pools to my left nut the main waters held copious numbers of Shoveler and Flamingo along with many more Coot and large flocks of Gulls, mainly Black-headed and Yellow-legged.  A sandy beach eventually provided my first waders of the day with a couple of Turnstone and a single Sanderling,  A second Sanderling was found at the end of my journey just after coming across dear friend Ollie parked up at the side and watching the many Stonechat and, for me, a recently departed Dartford Warbler.


A Kestrel chose that moment to hover overhead.  But I did eventually find a pair of Great Crested Grebes before starting back to the town, recording both a small flock of Greenfinch and a few Serin, to take the motorway towards Retamar and the Cabo de Gata Natural Park. 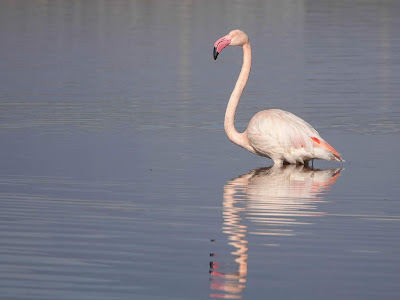 Driving through Retamar I noted a couple of Monk Parakeets (they seem to be everywhere!) and once on the track along the beach quickly added both Black Redstart and White Wagtail along with many Stonechats.  Just the one Magpie perched atop a large bush and then a small flock of Spotless Starlings, a few Crested Larks and a handful of Greenfinches.  the final bird taking the concrete road back to the main road to Cabo de Gata was a Robin.

Check out the accompanying website at http://www.birdingaxarquia.weebly.com for the latest sightings, photographs and additional information
Posted by Bob Wright - The Axarquia Birder at 12:38