Christmas on the Hamble River

Back at our little house in Stamford, Lincolnshire but Christmas being spent with family "down south" between Southampton at Portsmouth.  We arrived in that sailing hotspot called Warsash at the mouth of the Hamble river where it meets Southampton Water to stay with brother-in-law, Chris which gives the opportunity to walk the shores of both the river itself and Southampton Water.  Christmas Eve was pleasant enough so we were able to get out for an afternoon walk on the river shore whereas Christmas Day was absolutely fabulous; no wind, no cloud and lots of sun and blue skies.  So come Christmas Day and the promise of good weather I was away by 9 o'clock to visit the relatively nearby Titchfield Haven reserve at Meon.  What a disaster!  Whereas I had expected the reserve to be shut I did think there would be some way of seeing some of the reserve other than using my bins form the shore car park.  Back home before mid-morning I awaited the return of Jenny and Chris before we took a longer walk along the main shore as far as the Warsash lakes just inland from Southampton Water but, like a fool, decided not to take ether binoculars or camera on our 6km walk.  The less said about Boxing Day the better given that we only had a hour's dull relief from the continuous rain.  The only good news was an away win for the Saints at Chelsea and West Ham losing once again!

An interesting drive south from Stamford to Warsash on Southampton Water at the mouth of the Hamble river on Monday where we found both Dunnock and Robin in the garden. Six Red Kites along with both Buzzard and Kestrel recorded on the journey but most impressive was the covey of 8 feeding Grey Partridge on the grass verge alongside the A43 as we drove past Deene Park just north of Corby.  Lots of Rooks and Carrion Crows seen along with Wood Pigeons and Magpies.

The Christmas Eve stroll alongside the Hamble  River the water approaching low tide was rewarding as we recorded 5 Brent Geese, a score of Wigeon, a Greenshank and a couple of Redshank with the occasional Turnstone and both Black-headed and Herring Gulls. Back to the house, noting the passing Cormorant, to upload photos and discovered I did not have a suitable lead with me; how frustrating is that?


Christmas Day started disappointingly as I could not access the Titchfield Haven reserve but with the tide well in it meant that both the Sanderling and Turnstones were very close.  Even closer when I approached the tiny harbour at the mouth of the Meon where I found a dozen more Turnstone in addition to Mute Swans, Mallard and Black-headed Gulls. 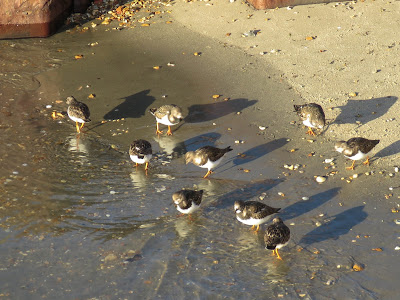 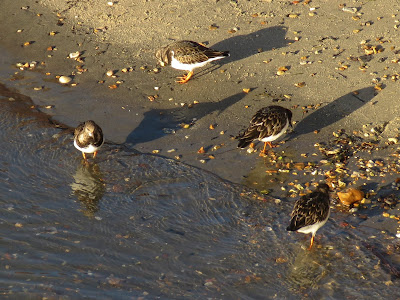 The "free" hide near the Visitors Centre was locked but I did discover a single Chaffinch and then off to the viewing area overlooking the pool nearest the shore.  A few Coots and lots of Black-headed Gulls along with a pair of sleeping Oystercatchers.  The river itself held a handful of Gadwall and in the next pool upstream I could see a large flock of Canada Geese along with Shelduck.

The longer late morning walk along the shore from Warsash was far more productive even if we had neither bins nor camera.  No sooner had we reached the shore proper, even with still a high tide, that we had good views of Wigeon and Teal along with a number of Oystercatchers and Redshank.  No sooner had we stopped to admire the close-by Black-necked Grebe that I saw the head of a Seal looking at me and whilst we watched it "fishing" Jenny even managed to catch sight of a fish in the animal's mouth.  Indeed, walking on and looking back at the enclosed water the Seal had moved even closer to us.
Approaching the marsh we were able to watch a quartering Marsh Harrier working its way inland and then, approaching the small lake, we had first a number of Lapwing and then the site of a few Mute Swans.  Once nearer we also added Mallard and Gadwall along with many Canada Geese, a couple of Shelduck, a trio of Brent Geese and a few Pintail, not to mention the ever-present Coot. We even managed to identify a lone Avocet at rest.

Making our way inland for the return journey home we quickly added Wood Pigeon followed by Magpie, Carrion Crow and Common Starlings.  All very good but I could kick myself (and probably fallen over!) for not taking at least the binoculars.

Check out the accompanying website at http://www.birdingaxarquia.weebly.com for the latest sightings, photographs and additional information
Posted by Bob Wright - The Axarquia Birder at 11:09