Might be general Election day back in the UK but my dear friend Dave Elliott-Binns was able to join me for a coffee at my overnight hotel in readiness for a good morning's birding around Cabo de Gata, a sort of follow-on from our respective day's birding of yesterday.  And we both did better, finally passing 50 species for the morning!

leaving the hotel in Dave's car, very necessary given the ground conditions at the back of the salinas following last week's heavy rain, we headed straight towards the middle on the beach straight where Dotterels had been recorded a fortnight ago.  Approaching the area we recorded Black Redstart, Crested Lark, Greenfinch and House Sparrows on or near to the low wooden fence to our right, sea side of the road.  Whilst we slowly crawled along the gravel area between road and fence checking each of these areas between road and sea a Raven passed over before the slight movement quickly drew our attention to the first of the Dotterel.  Within seconds we had identified at least ten individuals as they moved quickly from cover to further back from the road.  Sitting quietly the birds gradually edged back a little closer, never really in the open but an opportunity to get a few photographs. 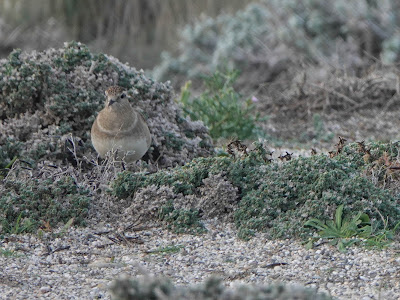 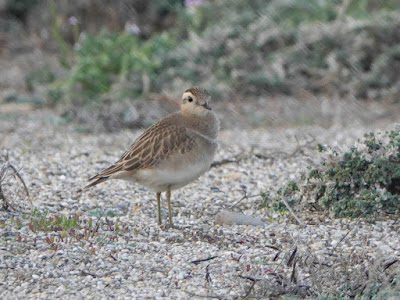 Then it was straight to the end of the road, round the roundabout and a start on the very muddy track at the back of the salinas.  The first pool provided a host of gulls including Black-headed, Yellow-legged and Audouin's Gulls.  nearer to us a number of Redshank and then a few Dunlin and Sanderling.  To our right regular sightings of Meadow Pipit, Thekla Lark and Spotless Starlings.  Indeed, one large flock also contained a score of more Common Starling, all sitting tight on the wires as a separate unit.  Then again, we counted eighteen Shelduck on the water to our left.

Working our way along the track we then added Sardinian Warbler, White Wagtail, more Black Redstarts and Thekla Larks and a Red-legged Partridge.  A small number of Slender-billed Gulls on the next water and the first of a three Kestrels on the land side.   By now we were regularly recording Little Egret and a Collared Dove and soon we were back on the main road and made our way to the first hide as we approached the village.

From the hide we had Iberian Grey Shrike both near the water and behind us along and, apart from the many Flamingos on view, we started to take our scopes to see what else might be identified.  With a few Crag Martins flying around above us we managed to find both European Curlew and a Stone Curlew "hiding" in the shrubs to our front-right.  On a far bank on the right  Dave managed to track a group of four large waders.  Much work completing the identification of what eventually turned out to be a single Whimbrel along with three Bar-tailed Godwit.

As we approached the first hide leaving the village a couple of Cormorant flew in to the water and way to our left with the use of the scope we found another trio of Stone Curlew.  On the water itself, in addition to the many Flamingo, we recorded Shoveler, Wigeon, Mallard and a sleeping flock of about 25 tightly packed Spoonbill.

On to the large hide at the end from where we had a better view of the Spoonbill and also added Chiffchaff. resting among the many gulls Dave also managed to find a trio of Sandwich Tern.  But it was as we returned to the car and the pleasure of talking to a visiting British couple who informed us that yesterday they had found a large flock of Trumpeter Finches that a single individual flew in and alighted on a fence not five metres away and proceeded to remain for the rest of our time on site. 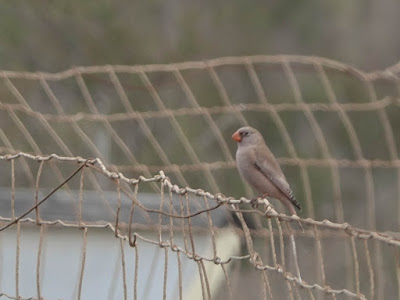 Our next destination was the lighthouse where we sighted a Black Wheatear as we climbed up from the roundabout but nothing else to record.  So back to the village for a coffee before driving through Cabo de Gata itself to take the shore track across to the Arroyo Morales.  On the way a lovely charm of Goldfinches plus a further three Trumpeter Finches.  parking the car at the end of the long straight we spent a little time watching the feeding Meadow Pipits and a handful of Short-toed Larks before walking to the arroyo which now had a large lagoon.  All to be seen was a single Black-necked Grebe but with a little patience we then added both Moorhen and Coot further upstream along with a single Little Grebe. 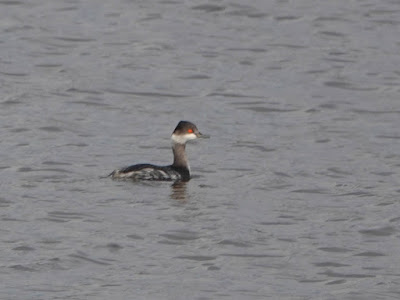 Just as we were about to say nothing else was to be seen when I found a Kingfisher sitting on the low, sandy bank on the far side of the water.  then it was a gentle walk to the "bump" where we saw a single Cattle Egret fly over and heard at least one Cetti's Warbler calling.

Back to the hotel to say our goodbyes and festive greetings to respective spouses before heading back, for Dave, to Arboleas 100 kilometres to the east and for me the almost 200 kilometre drive back to Mezquitilla.  Seemed a shame that we had not seen a Blackbird so, as I approached the San Jose junction, decided to take the short drive down to the large camping site on the off-chance that I might find the bird.  No such luck but carrying on down to the river, which was now a very large lake, I was delighted to find a lone feeding Common Sandpiper so topping the 50 species for the day.  Excellent weather, birds and, of course, the special pleasure of Dave's company. 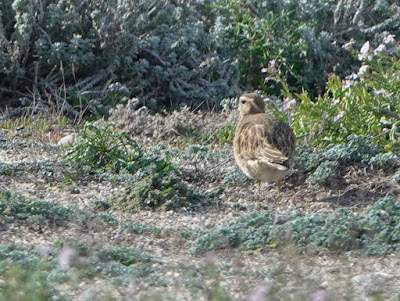 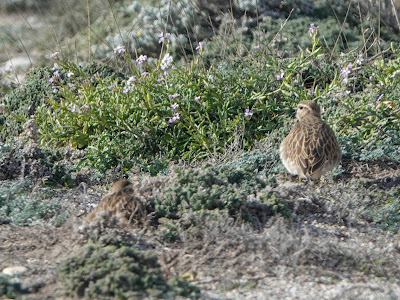 Check out the accompanying website at http://www.birdingaxarquia.weebly.com for the latest sightings, photographs and additional information
Posted by Bob Wright - The Axarquia Birder at 11:31