Whilst I am currently "aid up" as a result of on-going treatment for severe back pains and medication that forbids driving, It is great to see that others are out and about enjoying their birding.  So special thanks to my friends Dave Elliott-Binns who forward details of his Aerboleas Birding Group (see below) and also Chris bell back in Worksop, UK who gives me a regular update on what he is up to in his birding travels around the East Midlands - and also still manage to notify me of what he sees reported on the local scene out here in Malaga, Spain.  Your reports and contacts are much appreciated.

Last night I received the latest report from Dave and on this occasion he and his group were once more at the Sierra de Madria, an area I am yet to discover, up in Almeria province.  My word they saw some great birds including at least half-a-dozen that I am yet to record this year.  A word to UK readers; the common black corvid out here is the Raven and if you want a Rook then you really need to be in the far north almost on the French border, if you're lucky.  We do get Crows but they seem to widely spread in localised pockets so, again, not an everyday occurrence.  For me in Mezquitilla to the east of Malaga city, even a Wood Pigeon and Magpie are uncommon and require a drive to known areas.  Now compare that to the average drive along any UK motorway and you seem to see Wood Pigeons, magpies just everywhere and once in the countryside there is always a Crow to be sen.  On the other hand, I have Black Redstart, Sardinian Warbler, Mediterranean and Audouin's Gulls, Crested Lark and Hoopoe as everyday sightings so probably works out even between us!

Gilly and I headed north towards the Sierra de Maria mountain ridge.  From a distance we could see it was shrouded in low cloud and mist.  We hoped the sun would clear it as time went by.  We all met at the Repsol garage cafe in Maria town.  There were 10 of us in all. I made the decision that we'd go to the Botanical Gardens first. Unfortunately Peter and Alec didn't hear me and headed off towards the loop.  They caught up with us as we were about to enter the gardens . They'd missed the cracking male Pied Flycatcher by the trough and other birds including Great Tit, Serin, Chaffinch, Coal Tit and a Jay.  Gilly had spotted a lovely male Black Redstart.  After entering the gardens she also found a Cirl Bunting.  A number of Bonelli's Warblers were in the area.  We heard and then later saw a Raven.  Kevin spotted a Rock Bunting atop a pine tree.  We then had good views of a small flock of Long-tailed Tits and a single Crested Tit.  A Short-toed Treecreeper made a fleeting visit.   Some of us did the lower walk.  Jacky heard a Robin.  The rest who stayed in the garden area added a Blue Tit.  Gilly also spotted a Subalpine Warbler.

We then convoyed our way round the loop from near the entrance to La Piza all the way round to the hamlet.  First of all we saw numerous Carrion Crows.  Then Gilly saw a small plume of Griffon Vultures.  We also saw Linnet, Calandra Lark and Kestrel.  We reached the junction prior to the village and waited for the rest to catch up.  Whilst waiting we added Corn Bunting and Barn Swallow.  Carrying on we saw numerous Magpie.  On a ruined building I spotted a Rock Sparrow.  Les and john added a Woodchat Shrike.  As we approached the cliff face, we had another Corn Bunting and added a Black-eared Wheatear.  We watched a 10 strong plume of Griffons.  Stopping just prior to the rock face, I spotted two raptors coming towards us...thank God!  The first was an Osprey and the second, identified by Les, was a Marsh Harrier.  Both firsts for the Sierra de Maria!  We heard a Red-legged Partridge and later saw some.  I managed to briefly spot the resident Black Wheatear.  At the next village Gilly and I had good views of a Northern Wheatear.  We missed out on the Lesser Kestrels which John and Les saw.

We reached the hamlet to be greeted by about half a dozen Yellow Wagtails.  About 3 Northern Wheatears were seen nearby.   No sign of the Lesser Kestrels here, so Gilly, Kevin, Trevor and myself headed for the La Piza forest restaurant.  The others stopped of at the farm trough, seeing a Turtle Dove, Short-toed Lark, Skylark, White Wagtail and Goldfinch.  Jacky was already at La Piza having done her usual walk round the high part of the Botanical Gardens.  She had heard a European Cuckoo.  As we ate our lunch we had good views of a Great Spotted Woodpecker, Mistle Thrush, Crossbill, Chaffinch and some tits.

We ended up with 51 species, the stars being the Osprey followed by the Marsh Harrier.
Two apologies.  One to Alec and Peter for not making sure they'd heard the plan.  Secondly to Paul and Reyna, who weren't there, but I'd promised them we wouldn't see anything out of the ordinary!  Sorry!
Regards, Dave


Two additional photos of Bee Eaters I found in our local rambla the other day... 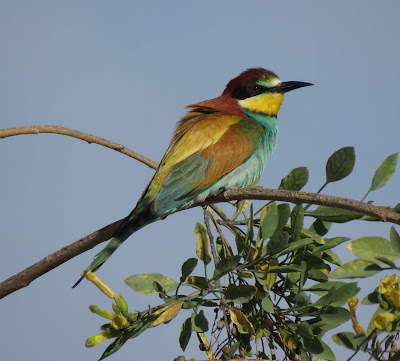 Check out the accompanying website at http://www.birdingaxarquia.weebly.com for the latest sightings, photographs and additional information
Posted by Bob Wright - The Axarquia Birder at 04:45