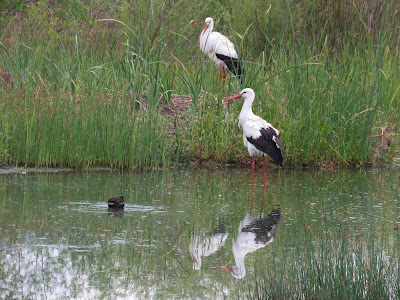 Following yesterday's hour down at the Rio Velez to check that I was all right to drive and chance to rediscover what birds, trees and rivers look like, this morning I took myself off to the Charca de Suarez on the western outskirts of Motril for three hours super birding.  Dry and cloudy a I set off at 9 and a large gathering of feeding Pallid Swifts above the top of the neighbouring apartment blocks.  All very quiet as I approached and very little to be seen in "Turtle Dove Alley" other than Collared Doves and House Sparrows, albeit I was sure I had a first Turtle Dove of the year but the view was very obscured and if back they were bound to be found inside the reserve.  This indeed proved to be the case with at least half a dozen individuals noted.  And having taken the back road I could not but help seeing the breeding House Martin colony in full swing at the back of the reserve.

About a dozen of us waiting for Mano to open the gate and I was pleased that visiting friend from Sweden, Hans Borgjessen, was able to join me.  Straight to the new hide overlooking the Laguna del Alamo Blanco before the overnight birds were disturbed and already we could here Cetti's Warbler, Nightingale and Turtle Dove in the immediate vicinity.  Once ensconced we were able to find a young Glossy Ibis feeding immediately in front of the hide with an adult at the back of the water.  Two White Storks present on this occasion along with a pair of Black-winged Stilts. Just the one Moorhen initially and then Hans drew my attention to well-ringed Spoonbill (origin northern Europe, either Holland or Germany).  I don't why I bothered to leave the hide for a better view as the bird simply completed the circuit and reappeared in front of the hide!

It seems out of place to record such a common bird as Spotless Starling but, at the same time, a small party of Bee-eaters flew over and another, larger, group later in the morning.  Things really beginning to hot up now as a Snipe emerged from the grasses to our near left and then, wonders of wonders, a Spotted Crake right out in the open a little further back before crossing to the island and back again.  At least all in the hide had excellent views and most good photographs of same. 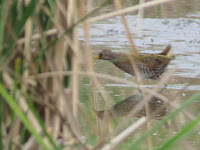 Next in, or rather over, was our first duck of the day as five Mallards tried to decide which pool to visit.  A long way off but, again, Hans was first to spot the incoming raptor. As it approached a Heron flew right to left and then the raptor was near enough to be identified as a Marsh Harrier.  But that was not the end of the excitement as a Squacco Heron flew in to replace the earlier Cattle Egret on the dead branch to the right of the island.  A long-staying visitor again and all in the hide well-pleased.

And to think we had been on site for only about 50 minutes!  Finally, we heard a Greenshank and then a Redshank appeared in front of the island.  But to its right on the shingle was said Greenshank.


At this point we decided it was time to see what might be found on the main Laguna de las Aneas.  An interesting walk as we quickly added Goldfinch and then a handsome male Serin.  A Zitting Cisticola was busy singing and making occasional short flights and a Blackcap was finally seen having heard so many as we made our way along the track.

On arrival at the hide Manu had his scope in place for us take a look at the resting male Little Bittern.  He then informed us that as he left the previous hide, about two minutes before us, the recently -arrived Purple Heron had flown over; one that we missed on this occasion.  The water was occupied by mainly Common Coots but immediately in front of us on our left of the island was nesting Red-knobbed Coot and its mate in the water nearby.  The Mallards had arrive and we also had a couple of Little Grebes.

At one point there were two Cormorants near the island along with five Grey Herons in the vicinity and even a few House Sparrows put in an appearance.  We continued to hear many Cetti's and Reed Warblers.  We could hear the nearby Turtle Doves and Nightingles and we were about to be rewarded with the first good view as we made our way towards the Laguna del Tebol, the former in a tree top and the latter on the fence leading down to the hide.  At this point Hans picked up the two Greenfinches that made a rapid disappearance.  We could see much movement in the willow(?) trees towards the end of the track but were unable to split the "Chiff/Willow" appearance.
Very little on the water here other than a handful of Red-knobbed Coots including a well-grown youngster so we made our way back to action centre near the trees.  By now we had been joined by local guider George Lamb and his two guests so with five eyes things got decidedly better.  George had already seen and photographed a female Pied Flycatcher and a little later the bird returned and posed on the rails.  Meanwhile, both Willow Warbler and Chiffchaff were identified along with the first of a couple of Bonelli's Warblers.  Also moving around was a male Great Tit.  A rather large "Sardinian" appeared in the trees and we eventually tracked it down for a better identification (what would a Sardinian Warbler be doing foraging around in this manner?) and all agreed, and checked with the Collins Guide, that we had indeed seen an Western Orphean Warbler. But the fun continued as the local Nightingale kept reappearing on both ground and fence rail and, finally, a large, fat-looking warbler-like bird with apparently no distinguishing features (yes, you guessed) was finally identified.  Hans had been listening to the bird singing and then we all had clear views of a Garden Warbler as it popped across the track. 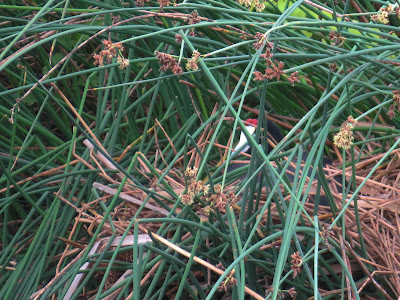 On that note we started off for gate which was due to open in 38 minutes to let us all out.  Time to continue the circuit in the hope that we might find the local chameleons, we did not, and a very short stop at the hide on the opposite side of the laguna.  Nothing to report here other then another pair of Red-knobbed Coots.  So onto the final hide overlooking the Laguna del Lirio and another pair of breeding Red-knobbed Coots plus the final conclusion that we were not going to see a Purple Swamphen this morning.  But suddenly, out of nowhere, an incoming Night Heron landed to our left and remained for us all to take good photographs.

What a way to end the morning and as we made our way towards the gate a Blackbird flew across the track.  Whilst waiting for Manu to arrive we took great interest in studying and photographing the tiny Mediterranean Tree Frog Hyla meridionalis right in front of us and a pair of Red-rumped Swallows flew around whilst a single Little Egret crossed overhead.  If you add on the occasional Yellow-legged Gull we had added three extra species "after hours."

So on towards home and driving back down Turtle Alley only Collared Doves and a trio of Common Kestrel to add to the list making a final total of 47 species in three hours plus the earlier Pallid Swift.  And when was the last time I saw 9 warbler species in one session and also managed to record 9 new species for the year list?  An excellent way to get back into birding and shared with great company.

Check out the accompanying website at http://www.birdingaxarquia.weebly.com for the latest sightings, photographs and additional information
Posted by Bob Wright - The Axarquia Birder at 12:18