Clear blue skies and bright sunshine for the Andalucia Bird Society field meeting over in the Loja area and nineteen of us joined local professional bird guide, Mick Richardson for a wonderful morning up the Sierra Loja followed by a couple of hours in the afternoon exploring the fields around the back of Huetor Tajar.  What a wonderful winter extravaganza in the morning with all thrushes recorded.  Indeed, had not the Rock Thrushes departed these shores barely six weeks to go for their African winter we might have recorded eight out of eight.  Add on both Black and Northern Wheatears along with their Chat cousins Robin, Black Redstart and Stonechat and you will appreciated what a thrushing morning we had!  As for the afternoon, with well over an hundred Stone Curlew and about thirty Little Bustards, the single Grey Wagtail, Sparrowhawk and Great Spotted Woodecker were something of an added bonus.  In all, my car had recorded a very respectable total of 47 species for the day.

The day started off fine as I collected Australian birding visitors Bob and Noreen Ashford and then on the mountain crossing between Zafarraya and Loja the emergency alarm in the car suddenly set off t let me know that the outside temperature had dropped to 3C.  Consider ourselves lucky as the few who stayed overnight in the area awoke to a temperature of (minus) -1C and had to resort to ice scrapers before making their way to the meeting point!  For we three, though, Crested Lark, Rock Dove and Woodpigeon as we approached quickly followed by the first Azure-winged Magpies and House Sparrow.  Not as many Spotless Starlings as one might have imagined and, all into just five vehicles we made our way straight to the top, passed Charco del Negro and the "Fossil Cave" to start our winter thrush search.  Just the one stop in the turning circle for the lower quarry where we picked up Robin, Sardinian Warbler, Greenfinch and Chaffinch along with a couple of Red-legged Partridge and very many more Woodpigeons.  Also seen on the climb were a number of Thekla Larks and the first of a number of Choughs. 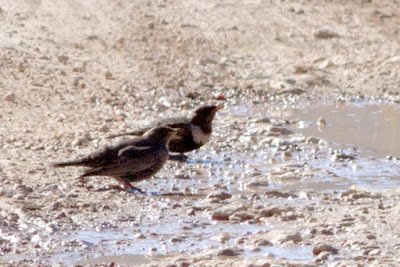 Once in our designated area we soon found our first Ring Ouzels and, as we watched and walked the track we determined that there must have been as many as fifty present in the immediate area.  There Redwing flew over and eventually we got a better sighting.  We had already recorded Mistle Thrush and a first Blackbird lower down the mountain and now we to see another couple of Blackbirds quickly followed by the first Song Thrush.  Mick and a few others had heard a Fieldfare and, eventually, we got a good, but very short, sighting of the individual as it moved further away up the slope.  Blue Rock Thrush was relatively simple with a lovely ale found posing on top of a rock as we followed the flight of a pair of Black Wheatears whilst also recording one of many sightings of Corn Bunting. 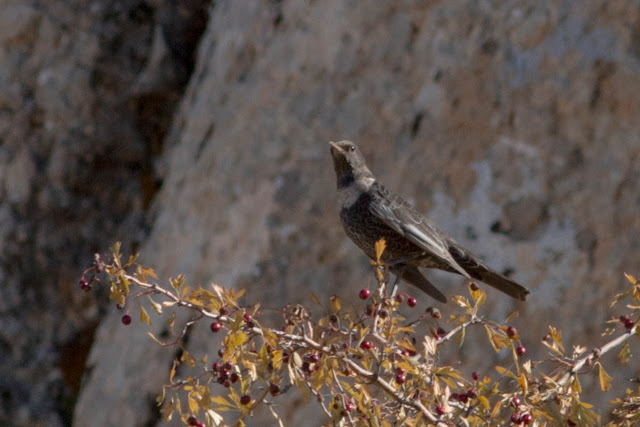 Meanwhile, there was one further bird that we hoped to find now that the temperatures were beginning to fall and that might bring them don from the highest slopes.  Not the Black Redstarts that were to be seen nor the many Stonechats or even the few Crag Martins but the specialist bird of the area, the Alpine Accentor.  A number of times we heard the distinctive, low churring and followed sights of small birds on the cliff face but all turned out to be Rock Sparrows.  But our searching was eventually rewarded when we found a handful working their way along a crack on the rock face.  And for good measure we also had a departing Ibex round across our sight below the track.


A Little Owl was found resting on a rocky outcrop below the track, many more Thekla Larks and even the odd Goldfinch and a passing flock of Linnet.  On this occasion Rock Buntings were very few and far between but as we started our return journey with a short stop at the ponds of the Charco del Negro a trio of Meadow Pipits flew over.  Then it was on down to the power station where we found many feeding Thekla Larks and our solitary Iberian Grey Shrike.

After a break for lunch we set off to find the Stone Curlews in the fields behind Huetor Tajar and there they were.  At first perhaps just about a dozen accompanied by a number of Lapwing but further along the path somebody/thing had disturbed the roosting flock and suddenly there seemed to be well in excess of an hundred in the air.  Woodpigeons were also being recorded in even higher numbers and in the trees and bushes in front both Serins and Goldfinches.  Three Cattle Egret and a Sky Lark flew over but the highlight was the female Hen Harrier that put in an appearance.

Next it was a drive around to a neighbouring field on the other side of the railway track where we duly found our small flock of Little Bustards.  Feeding/resting with them were a number of Lapwing.having found all six target birds for the day, some called it a day but we remaining dozen completed the clockwise circuit of these fields and as turned right towards the river having passed the olive processing plant had a Sparrowhawk fly low over the car.  Then it was the drive along the bank above the Cacin river where we found both Moorhen and more White Wagtails to the track leading up and over the railway line.  A stop at the bottom of the incline enabled us to find the flash of yellow I had noticed "dive" into the water channel and for all to see the male Grey Wagtail.  We had hardly started our climb up t the bridge itself when I stopped to check out the "largish" bird I had seen in the bare tree.  As soon as we had birds on the bird we were all able to enjoy the sight of a Great Spotted Woodpecker.

Then it was on, over the road and a stop on the track just before reaching the heavily banked Cacin.  The sheep were on their way home but the following score of Cattle Egret seemed unsure of where to go next.  Right in front of us we had a large charm of Goldfinches feeding on the newly-cut grass and a walk up the bank to check out the river produced not so much water as a riot of flattened reeds - but we did find a feeding Cetti's Warbler to complete our observations for the day.

Check out the accompanying website at http://www.birdingaxarquia.weebly.com for the latest sightings, photographs and additional information
Posted by Bob Wright - The Axarquia Birder at 01:26