My chance to do a local birding but the forecast was suggesting heavy overnight rain followed by sun at 8am today and then cloud soon after lunch.  Obviously, a question of up early and away and I was on site at Rutland Water just before 8am.  The clouds had cleared, the strong winds of yesterday had abated and the sun was out in the sky but very bright.  Only bad news was that it was bloomin' cold!  And my overall impression of the reserve after a three month absence?  Weird!  The main reservoir was well down on water so obviously we are not the only ones (in Spain) praying for rain but, yet, some of the lagoons were too full.  So much maintenance had been undertaken that nearly all the cover has disappeared from the main feeding station and much of the reed has been cut back.  Too early to make use of the hides as I headed towards Lagoons 3 & 4 as not only were there few birds about but the very low, bright sun made any on site mere silhouettes.  And by the time I left to take a look at the Burley Fishponds and Manton Bay I realised, with a very few exceptions, how few birds were actually about; not helped, of course, by the ongoing maintenance work with saws and fires ,etc disturbing just about everything.

Approaching Egleton I had Rooks, Crows and Wood Pigeons along with a couple of magpies and the first of many Egyptian Geese.  However, there must have been t least five flock of roosting Black-headed Gulls on the neighbouring fields and probably totalling at least 500 individuals.  The first Robin of the morning put in a brief appearance as I drive into the car park quickly followed by the first of many Blackbirds.  naturally, the resident Jackdaws announced my arrival to all and sundry - but being first on site there was no "all and sundry" to appreciate their welcome other than myself!

A good stop at the feeding station which, in addition to the scavenging Grey Squirrels, produced the usual assortment of small birds represented by mainly Chaffinch and Great tit along with Robin, Blue Tit, House Sparrow and Dunnock.  A number of Jackdaws and a couple of Pheasants arrived to displace the pair of Moorhen making use of the small pond.  Having also noted the pair of Collared Dove I made my way northwards towards the Sandpiper Hide overlooking Lagoon3.  A large number of roosting Lapwing and also plenty of Egyptian Geese including sat on the Osprey's perch.  As with the silhouettes seen on the way down, nearly all the ducks were Wigeon and they certainly seem to have arrive at Rutland by the hundred. Also on the water I recorded  a few Mute Swan, Pied Wagtail and a large roost of Black-headed Gulls. Just beyond the main roost, a smaller gull roost also held a score or more of Great Black-backed Gulls.  I eventually found a few Teal hiding amongst the Wigeon and, right at the back, a few Tufted Duck and Gadwall.


On to the Shoveler Hide overlooking Lagoon 3 and this, by comparison with previous visits, was very quiet and nothing close to hand or making use of the mud flats around the edges.  A few Common Pochard and more Gadwall along with basking Cormorants.  Just the one Great Crested Grebe seen along with a single male Goldeneye.  Having checked the neighbouring hides it was Lapwing Hide overlooking the main South Arm that produced the main supply of birds with many Coots, more Moorhens and Wigeon along with Mallard, Teal, Tufted Duck and Great Crested Grebe.  I had already noted the first Little Egret form the Smew Hide but on the far side of the water towards Green Bank I picked up a female Red-breasted Merganser which was a very rewarding site.

Walking back to re-visit both the Shoveler and Sandpiper Hides I had a Wren fly low across the path in front of me and this was to happen on two further occasions before I left the reserve.  Nothing else to report at the former but, on visiting the Sandpiper Hide, a score or more Golden Plover had joined the Lapwing roost and I also added Herring Gull, a handful having joined the smaller mixed gull roost.

Time fore a short rest at the Visitors Centre and see how empty was the water in front, almost certainly due to the on-going maintenance in the near locality, but I was joined by a single female Stonechat and a handful of cock Pheasants.  The only addition at the feeding station was a Goldfinch so on to the Burley Fishponds.

Not "bursting at the seams" but more bird life on offer including a couple of Great White Egrets and a single Little Egret.  Mainly Wigeon, Tufted Duck, Teal and Gadwall but also, at last, a handful of Shoveler and some geese with good flocks of both Greylag and Canada Goose.  Just beyond the "fishing limit" I picked up both Great Crested and Little Grebe plus more Mute Swans and resting Cormorants. 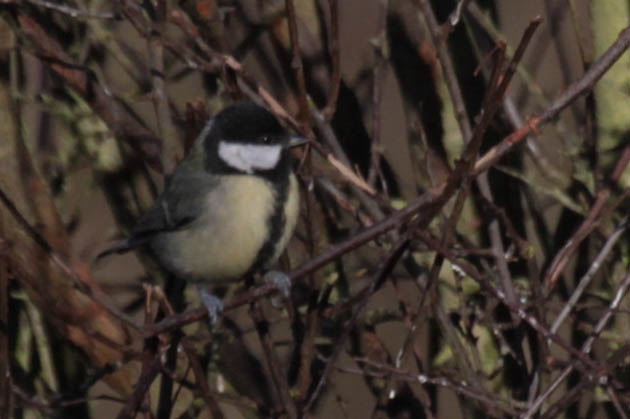 A very brief stop at the road bridge overlooking Manton Bay revealed how far the water level had dropped but also produced a Curlew Sandpiper.  It was then on up to the closed Lyndon Visitors Centre to check out the local feeder.  Fortunately, the hoppers were well stocked and attracting both Blue and Great Tit along with the resident Tree Sparrows and both occasional Chaffinch and Goldfinch. A Great Spotted Woodpecker put in the very briefest on a non-stopping visit to the hoppers and was away.  But looking down to the left of the Centre I eventually found my first Grey Heron of the morning. And then it was time to return home in Stamford and complete the next job and also see my first raptor of the morning with a hovering Kestrel.  On the whole, considering the overall lack of birds present, I was quite pleased to have actually recorded 50 species.

Check out the accompanying website at http://www.birdingaxarquia.weebly.com for the latest sightings, photographs and additional information
Posted by Bob Wright - The Axarquia Birder at 12:32