Along with sight fellow members of the Andalucia Bird Society I spent a lovely birding day up on the Sierra Loja in wonderful company and great weather; sorry, very hot weather!  I am sure that we all had our target birds for the day and visiting ABS member Arthur peach even managed to record six new "lifers" but, first things first, we all had good views of the breeding Rock Thrushes which are only here for the summer and just love residing at heights of 2000 metres plus.

Working our way up the mountain track with multiple stops to check the adjacent woods and fields we made our first prolonged stop at the lower quarry where, sad to say, if our breeding Eagle Owls were at home they were very much taking shelter in the cooling shade at the back of their nesting cavity.  We had already recorded Woodpigeon, Spotted Flycatcher, Chaffinch and Greenfinch and here we had short sighting of a Dartford Warbler along with passing Barn Swallows, Crag and House Martins.  Above us were the first sightings of the local Jackdaws and then or first Black Wheatear, a local breeding resident.

As we continued on up the mountain we added Hoopoe and the first of a couple of Mistle Thrush sightings.  Again, the first Red-legged Partridge although, at a much higher level, we were also to see a female with a dozen chicks in tow.  Moving on we added both Serin and Goldfinch and our first Common Kestrel.  No shortage of Azure-winged Magpies.  We were well above the tree line when we added our first Rock Sparrow along with a lone Woodchat Shrike.  Having recorded a juvenile Northern Wheatear we thought that might be the only sighting as of late the predominate bird of this family had been the Black-eared Wheatear.  We did indeed see many f the later but, I am pleased to record, we did actually find more Northern's including a female at a much higher altitude with a beak full of food for her hidden youngsters, or maybe they were still in the nest.  In addition, most of the party were able to observe a passing Short-toed Eagle as it made its way up the mountain.

Near the electricity sub-station we found not one but a family of at least four Iberian Grey Shrikes, so good to see that these lovely, small raptors appear to having a successful breeding season.  More wheatears and then our first Rock Buntings and, ere long, both Crested and Thekla Lark.


Having reached the greatly depleted pools at Charco del Negro where we had schedules our picnic lunch, we were able to watch a good-sized flock of Linnets taking advantage of the water and also joined by a few Goldfinch.  Looking around we finally found our first Chough and before we returned it seemed as if we would be inundated with this corvid.


Then it was on up and round towards the "Fossil cave" in search of our main target bird, the summering Rock Thrush.  First more Rock Sparrows, Crag Martins, Black Redstart and Blue Rock Thrushes but we were not to be denied.  From a male hiding behind a large boulder we eventually got clear shots of both male and female as they moved around their new territory.  Not just a Griffon Vulture high above but a quartet of Alpine Swifts spotted by Derek.  Along with Rod and Arthur we even managed to locate a second Woodchat Shrike and a singing Corn Bunting.

And so the return trip down the mountain and no need to take the alternative track have seen our Rock Thrush.  But bonus upon bonus.  Derek stopped his car as three Alpine Accentors rested on the track before moving off left.  We all gathered around to see if the birds. Something moved back across the track and we found another  Crested Lark and a juvenile Rock Bunting.  But at least a pair of the Alpine Accentors did cross and, for those of us standing further back and with the advantage of height, could see them reach the top of the ridge and then moved very low to the right and in our direction. 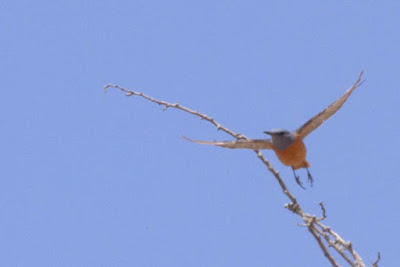 
Check out the accompanying website at http://www.birdingaxarquia.weebly.com for the latest sightings, photographs and additional information.
Posted by Bob Wright - The Axarquia Birder at 13:38