It may be an "unlucky" day is Spain, similar to our Friday 13th, but that was not the case for the sixteen members of the Axarquia Bird Group who were able to be present for the private access visit to the Charca de Suarez reserve on the western outskirts of Motril.  Travelling from as far afield as Fuengirola, Salar and the Lecrin Valley, not to mention our own Axarquia villages and towns, we were able to eventually record almost forty species during our morning stay.  Indeed, if you add on the additional birds seen at the follow-on to the picnic site at nearby Velez de Benaudalla the we certainly topped the double score.


Leaving just after 8 am with relatively close neighbour Bryan Stapley we had time to drive to the entrance via "Turtle Dove Alley", a concrete track in the middle of former sugar cane fields just outside the reserve.  Having seen Crested Lark, Spotless Starling and House Sparrow we the heard and saw our first Turtle Doves of the morning.  Both Blackbird and Zitting Cisticola were recorded immediately followed by a range of hirundines including Barn and Red-rumped Swallow, House Martin and Common Swift.  Indeed, the large communal nesting apartments of the local House Martins on the side of a factory unit at the back of the reserve were very active, so much so that it was almost too difficult to note the occasional Collared Dove.

Promptly at 9.30 Manu opened the main gates for our group and we were left to our devices for the next 3½ hours with  what appeared to be very many calling Turtles Doves - which were duly seen and photographed by many if not all.  Where to go first?  Like about half the group, I headed for the Laguna del Taraje where we found the odd Mallard, Little Grebe and Coot but also a single male Little Bittern.  The single Little Egret was very difficult to track as it concealed itself in the back of the reeds.  On the far side a Great Tit was seen in the trees and a couple of Reed Warblers were calling loudly.  The last took off to the other end of the pool and when we arrived were in time to get a hidden look once it had settle at the far side.

Meanwhile a most strange bird to behold; a fully grown juvenile Purple Swamphen.  Close by we found another two juveniles along with Mum hiding in the grasses. 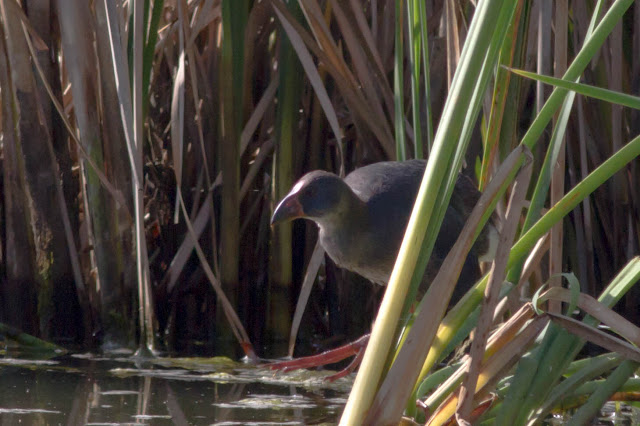 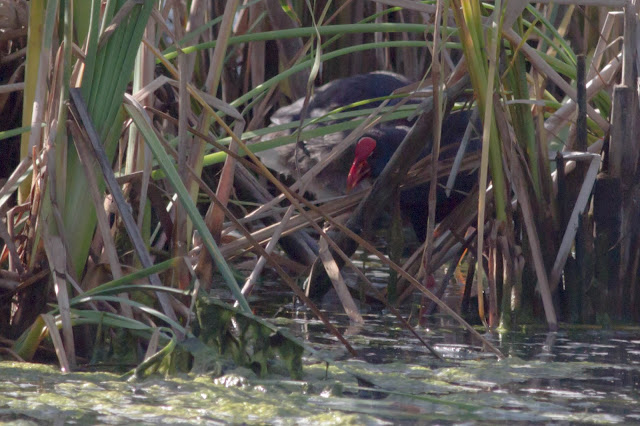 Next to the relatively new Laguna del Alamo Blanco which seemed very full of water but short on birds. But then the Common Waxbills arrived to be fed and Derek and group even manged to record a quartet of Red Avadavats feeding in the same area.  Even better, much to our delight, a few of the very rare and localised Black-rumped Waxbills put in an appearance.  The only other bird seen on the water was a lone Black-winged Stilt.

Moving to the main hide overlooking the Laguna de las Aneas we heard and saw our first Nightingales of the morning along with both the first Spotted Flycatcher and a juvenile Zitting Cisticola.

Arriving at the hide it was strange to see so much unoccupied water.  Mainly Mallard and Coots along with a few Little Grebe so we had to search to find the occasional Moorhen and the one adult Purple Swamphen.  Ricky was first to find the Feruginous Duck at the far end and then both a single Heron and a Yellow-legged Gull flew in and promptly hid themselves behind the now overgrown island in front of the hide.  A constant supply of hirundines and both Common and Pallid Swifts feeding over and on the water before the single Bee-eater put in an appearance.

As expected we recorded both Nightingales and Spotted Flycatchers on our way to the Laguna del Trebol where we duly recorded the first Red-knobbed Coots.  A Turtle Dove was singing happily in the old, dead tree to the back and a very vociferous Cetti's Warbler made us aware of its presence in the immediate area.  Viewed fro the hide at the opposite end of this laguna we had good sightings of both adult and juvenile Red-knobbed Coots. 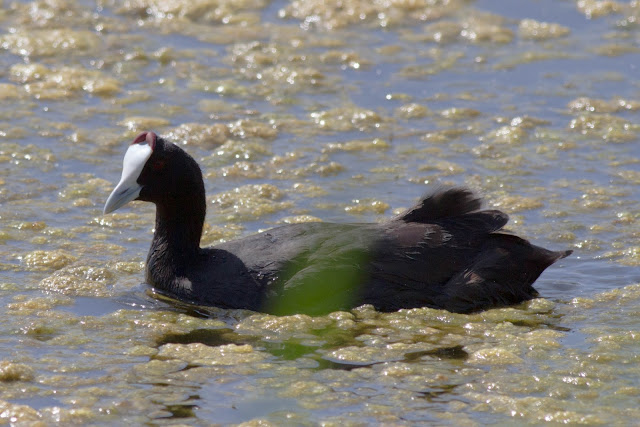 As we made our way to the final hide overlooking the small Laguna del Lirio we managed to record a female Blackcap on a top of a bush next to the fence.  the water itself produced more adult and juvenile Red-knobbed Coots and at the far end a female Yellow Wagtail of the UK flavissima race; now what was that doing here?  It was also at this water that Jon and Jenny wainwright managed to find a single Night Heron.  Meanwhile, David and Ann Jefferson managed to find a Sedge Warbler whilst at the Observatoria de la Ciguenela.

A final visit to both Lagunas taraje and Alamo Blanco produced nothing new so we gathered at the gates to say our farewells. However, nine of us continued up to the picnic site at Velez de Benaudalla to not only eat our own picnics but watch the activities of the resident Dippers who were busily feeding their young. 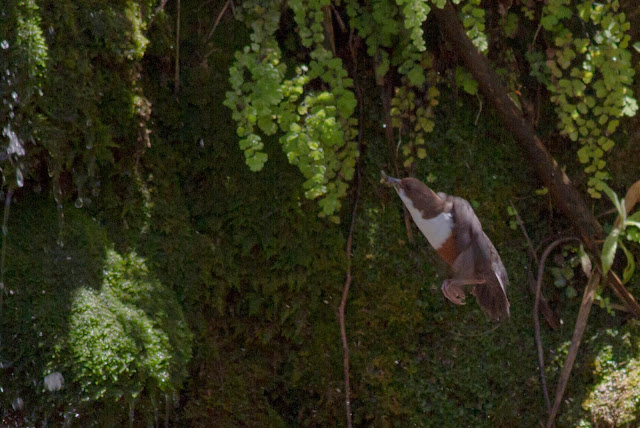 Lots of Chaffinches and Spotted Flycatchers about along with White and Grey Wagtails.  It is relatively easy to listen to the calling/singing Golden Orioles but a far more difficult task to see never mind actually get a photograph.  However, John and Jenny Wainwright saw a trio as they arrived and I eventually heard then saw a male.  Even better, if flew down quite close to me on the other side of the fence so enabling me to get a few photos.  Great! 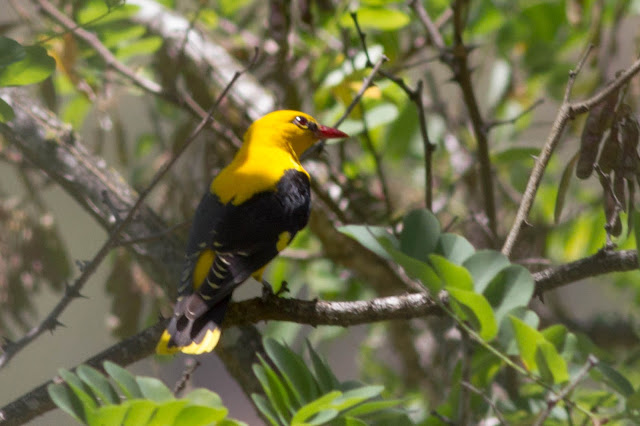 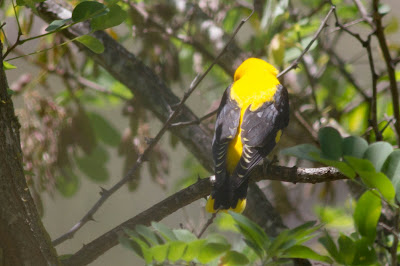 One last call for the seven of us heading back towards Torre del Mar as we made a detour to the heights above Cerro Gordo where, in addition to Barn Swallow, House Martin, Common and Pallid Swifts we actually found a couple of members of the small flock of localised White-rumped Swifts to put an even bigger smile on everyone's face as we then headed off to our respective homes.  Indeed, the last bird recorded was a passing Raven in heavy wing moult.


Check out the accompanying website at http://www.birdingaxarquia.weebly.com for the latest sightings, photographs and additional information.
Posted by Bob Wright - The Axarquia Birder at 08:06