Having seen Mick Richardson's photos of the Ferruginous Ducks at Charca de Suarez, I thought I had better make an urgent visit in case the birds decide not to stay and breed.  So off for the restricted evening opening and, apart from a quick look in the Laguna del Taraje for the Little Crake, which was not seen, on to the main hide overlooking the Laguna de las Aneas to seek out said ducks.  All rather quiet with a pair of Shoveler, the same number of Mallards and few Coots which were well outnumbered by the local Moorhens and I was beginning t think that this might have been a wasted journey.  I happily watched the diving Little Grebes and there certainly a good number of Cormorants and Grey Herons lining the eastern bank.  Then, from my left, the pair of Ferrugiunous Ducks paddle rather swiftly across in front of me undertaking regular dives, just like overgrown Little Grebes but showing their white backsides.


So onto the Laguna del Trebol where I duly found more Common than Red-knobbed Coots along with a few Mallards.  Back to the main hide and the Feruginous Ducks were more in the open but there were three together so, perhaps, these are visiting rather breeding birds.  Also present both Black-headed and Yellow-legged Gulls and only Barn Swallows feeding overhead.

Next some time to be spent at the relatively new Laguna del Alamo Blanco which really turned up trumps.  A Black-winged Stilt and a single Green Sandpiper to wards the back right but it was the quartet of Common Snipe that caught my attention along with a trio of Wood sandpipers.  Then, not the Moorhens, Coots, Mallards or even the Teal, but the single little "stripy" bird at the far back up close to the vegetation that caught my attention and demanded that I give it a really good check out with the scope.  This was, indeed, a small snipe, but not Common rather a single Jack Snipe.  And here was I thinking that the wintering individuals had moved on.  (Perhaps they had and this was a new arrival.)


This individual ignored his larger cousins and continued to feed on its own and, unlike the Common Snipe, very close to the water's edge so that, presumably, if necessary, it could quickly slink away into the reeds.  A single Little Egret departed and having noted the sole Ringed Plover I walked back to the Laguna Taraje, with a very small charm of Goldfinch passing overhead, in the hope that the final twenty minutes might produce the Little Crake.  It did not, just Moorhens, Coots and Little Grebe along with a Chiffchaff and a White Wagtail.  The final bird, flitting around outside the hide, was a Robin.

More photographs of this visit: 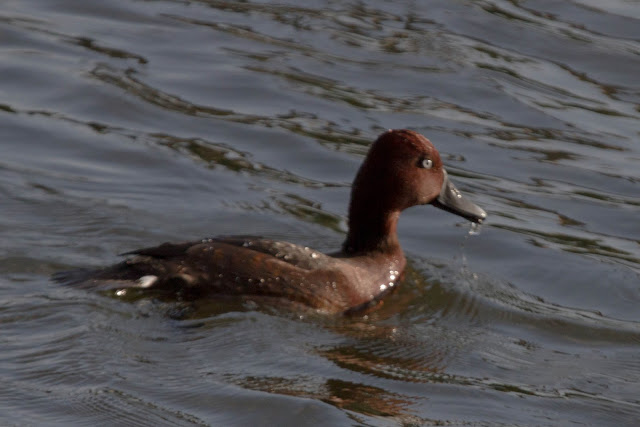 Check out the accompanying website at http://www.birdingaxarquia.weebly.com for the latest sightings, photographs and additional information.
Posted by Bob Wright - The Axarquia Birder at 13:52