Today saw the March visit by the Axarquia Bird Group with a three-hour morning at the Charca de Suarez our venue.  A light cloud covering as we arrived but this soon cleared to leave a clear, warm day albeit the wind picked up for the fifteen attending members from as far away as Fuengirola to the west and Roquetas de Mar to the East, plus all the in-betweens.  Was the journey worth while?  It most certainly was with almost 50 species recorded by the group as a whole including fabulous close views of both Little Crake, and when I say "Little" I mean little, and Moustached Warbler.  Add on Sedge Warbler, early Red-rumped Swallows seen by a few as they awaited the opening of the gates and my first Sand Martin of the year, not to mention the resident target birds of Red-knobbed Coot and Purple Swamphen then I think you could say that there was something for everyone.  Also, lovely to see many new and old faces once again.  Such a fabulous site, I will try and arrange a private morning visit in early June.

On arriving as well as the Red-rumped Swallows there were also many House Martins along with both Spotless Starlings and Collared Doves, and not to mention the breeding pair of Common Kestrels, and once inside the group seemed to split into two distinct groups; myself and others first visiting the Laguna del Taraje in search of the resident Little Bitterns whilst Derek Etherton and the other half started at the Laguna del Alamo Blanco.  Not only did we see a flying male Little Bittern but also had a views of the Little Crakes which had been reported yesterday.  Marvellous!  An odd White Wagtail and a pair of Great Tits on the opposite bank along with a Mallard and a couple of Coots plus a few Chiffchaffs seemed to sum up the total.  We did, however, also have singing Cetti's Warblers and a Little Egret flew over.  It was very noticeable how Chiffchaff numbers had dwindled since my last visit, a sure sign that return migration north was getting under way. 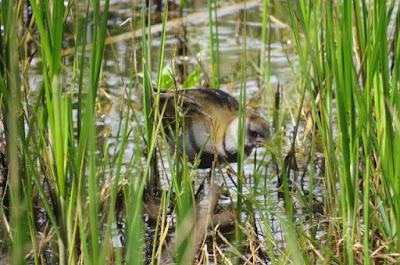 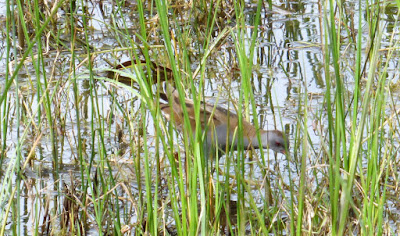 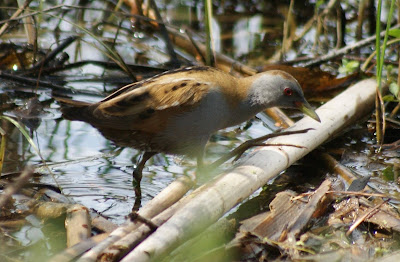 Meanwhile, before all "hell was let loose" when a couple of uncontrolled dogs chased through the water, Derek and company had views of both Little and Cattle Egrets along with White and Grey Wagtails,  Snipe, Common and Green Sandpiper, a female Bluethroat and, walking to our laguna recorded both Greenfinch and Blackcap whereas we saw both Serin and Goldfinch.  Once ensconced, the new group had even better views of the Little Crake which was out in the open immediately in front of the hide.  Meanwhile, we had arrived at this water which proved very empty until the arrival of a few Moorhen and a White Wagtail. At the rear we could see a quartering female Marsh Harrier.

The main hide overlooking the Laguna de las Aneas produced over a dozen Grey Herons along with Little Grebes, Coots and Moorhens.  A trio of Cormorant were present and a little searching finally found a "collared" Red-knobbed Coot at the far end.  Ducks were a mixture of Mallard, Pochard and Shoveler with at east one female Teal.  A few Chiffchaffs and White Wagtails a small flock of Yellow-legged Gulls arrived to take a rest.  Over the water a good number of Barn Swallows and the occasional Sand Martin.  The first of a number of Blackbirds seen during the morning flew across the water.

On to the Laguna del Trebol and the northern hide produced a half-dozen Black-winged Stilts as well as good views of Red-knobbed Coots including a few in the "natural" state.  A Green Sandpiper rested with the stilts.  Viewed from the southern end of the laguna we were able to see first Chiffchaff then a very close and clear view of a Moustached Warbler and, almost immediately after, a Sedge Warbler.  The same water also produced a trio of Green Sandpipers and Derek's party picked up a Wood Sandpiper.  Other birds picked up included Kingfisher and a Penduline Tit and another Robin was seen on the final stretch of track back to the gate and a female Black Redstart was playing around on the apartments block at the end.  To add a little sugar on the cake, a Zitting Cisticola was also picked up as we left the site after a very enjoyable morning with great birds and company.

Check out the accompanying website at http://www.birdingaxarquia.weebly.com for the latest sightings, photographs and additional information.
Posted by Bob Wright - The Axarquia Birder at 11:31