Our Dave is not one for giving up so easily!  Hoping that the Steppe Grey Shrike might still be about Dave Elliott-Binns and friends set off  at first light this morning with fingers crossed and bins at the reasy.  (I wonder how they manage to focus in this position?)  Read on to see ifthey were successful or not.

Twitch update plus Villaricos and Vera

Yesterday (Tuesday, 13 December) I returned to the Antarax river mouth near Almeria to catch up with the Steppe Grey Shrike that we missed out on last week.  I was only there about 15 minutes when it made an appearance. Here are a couple of photos....not the best as it was only just light! 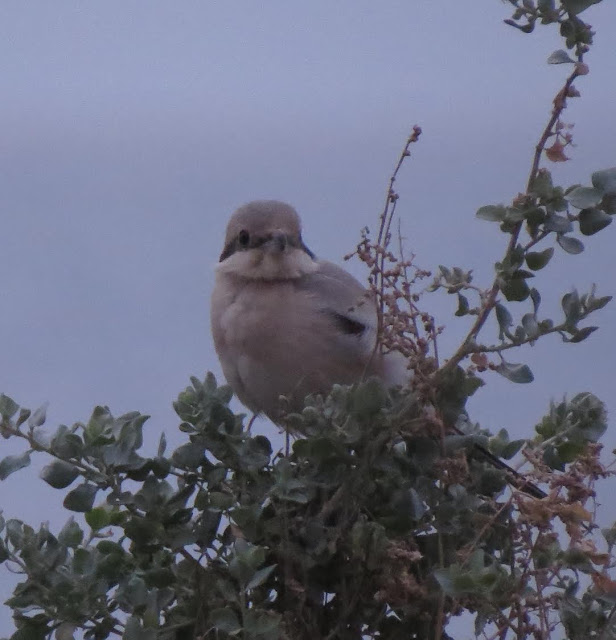 So today I took new member Richard H down to the Almanzora river rambla near Villaricos.  We approached the "ford" from the opposite bank seeing Mallard, Moorhen and a Snipe before checking out the pool.  Here, apart from more Moorhen and Mallard, was a solitary Redshank.  Kevin was already there.  We were joined by Trevor, Ann, Colin, Sandra, Richard S, Les, Alan , John and later Val.  Taking a stroll up towards the sewage plant we saw the first of many Chiffchaff.  A Cormorant, Magpie and Hoopoe flew over.  Also at least two Blue Rock Thrushes and a Cattle Egret.  Near the settling pools we had White Wagtail and a Green Sandpiper.  I spotted an Iberian Grey Shrike and Blackbird on the wooden fencing.  On the bigger pool there were Mallard and Shoveler.  We heard Cetti's Warbler and Kevin also had a Sardinian.  The odd Crag Martin flew by.

We then walked back to the vehicles and commenced to check out the pools further up the rambla.  In the pool by the ford in addition to what was seen earlier was a female Teal.  On the route up to the pools we added Dartford Warbler, Serin, Kestrel, Stonechat, Back Redstart and Greenfinch.  Then we got to the pools....or the area where they were supposed to be!  Workmen were still laying a pipe line and there were only one or two what can only be described as large puddles.  Mind you, one had Little Stint and a Snipe in.  Les then spotted a Jack Snipe.  It flew up the rambla.  We retreated to the cafe in Villaricos.

Once refreshed we headed to the beach.  The sea was as flat as a tack.  On the harbour rocks we saw the resident Whimbrel, Sanderling, Cormorant,Grey Heron and Turnstone.  Out to sea were Yellow Legged Gulls, a distant Gannet and some Sandwich Terns.  The group made their way to the estuary pool.  John spotted Little Ringed Plover and Dunlin.  On the water were Cormorant, Little Grebe and Common Pochard.  Les found two Purple Swamphen and Richard H spotted a Kingfisher. Another Blue Rock Thrush was spotted.  Kevin added a Common Sandpiper.

Moving to the beach we had better views of the gulls.  They were mostly Black Headeds with a few Audouin's and Mediterranean Gulls.  Small flocks of Turnstones were seen.  I managed to spot some Kentish Plovers on the rocky spit.  A Robin was also added.  A walk back along the beach didn't add anything to the list.  Sanderling, Whimbrel and Turnstone were seen.

Some of us then ventured down to the Laguna at Vera Beach.  There were numerous Mallards and a large gull presence.  John counted 45 Mediterranean Gulls amongst the Black Headed Gulls.  Four Sandwich Tern were resting on a sandy spit.  A Sanderling, with an injured leg, posed nicely.  Richard S added Crested Lark to the list.  We ended up with 53 species today and the weather was good as well. Regards, Dave

Check out the accompanying website at http://www.birdingaxarquia.weebly.com for the latest sightings, photographs and additional information.
Posted by Bob Wright - The Axarquia Birder at 10:25