A beautiful, clear and sunny morning and just right for a few hours at the Charca de Suarez on the western outskirts of Motril with Steve Powell.  Driving down "Turtle Dive Alley" provided both Zitting Cisticolas and House Sparrows but, sadly, the low sun was right in our face so no point stopping.  Onwards then to the Charca where we started off at the Laguna del Taraje.  Here we had a pair of Shoveler and Mallard along with the odd Moorhen and Coot plus a good supply of Chiffchaff anda single White Wagtail.

Then it was on to the ever-productive Laguna del Alamo Blanco and the start of the big debate - and not really helped when we came to look at the resulting photographs!  Three snipe with half a metre; one resting in the open, one partially hidden and one very much hidden behind the reeds next to the first.  The snipe, at first appearance, looked simply like a Common Snipe but others gathered around were alinkiung Jack Snipe.  Eventually, the bird removed its beak from its backside so confirming the shorter length and straighter, narrower size that the bird was indeed a Jack Snipe.  But, somehow, all looked most odd with its markings very much suggesting, according to "Collins" that the bird was a Common Snipe complete with very distinct barring on its lower flank.  Most strange and, hopefully, some with more expertise will be able to clear up the matter. 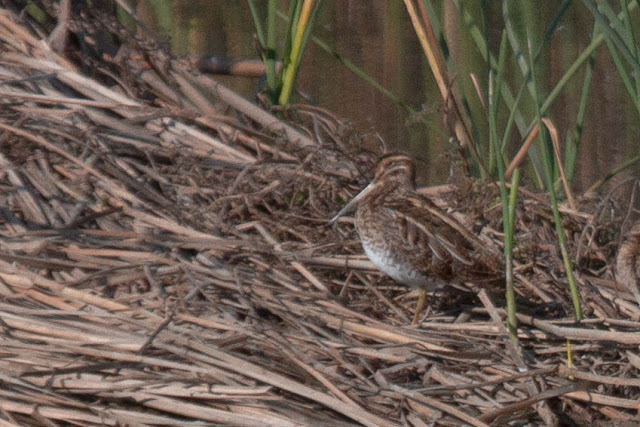 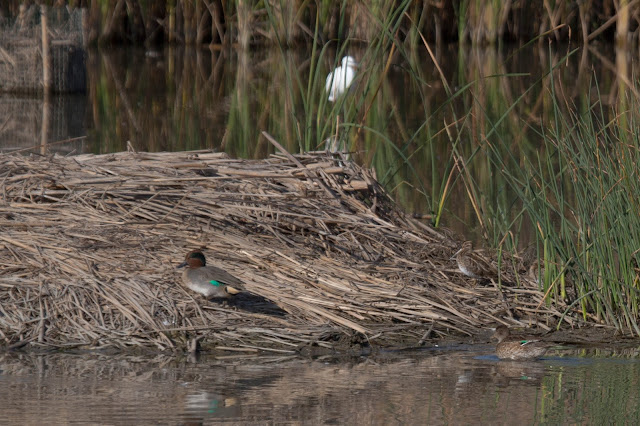 Meanwhile, lovely to see the small flock of Teal and even a Purple Swamphen put in an appearance at the back of the water.  Not just the one Little Egret but a handful of Cattle Egrets appeared on the island and whilst photographing the former a Kingfisher flashed through the viewfinder - as can be seen in the accompanying photograph. But we were not finished as a Water Pipit appeared from behind the said reeds, did a little walk along the base of the island and then disappeared from view once more.


On to the main hide overlooking the Laguna de las Aneas where we found the water somewhat less occupied than I had expected with only a few Coots and Moorhens accompanied by a handful of Little Grebe.  A Cattle Egret on the island and mainly Cormorants taking their rest.  Not a single raptor or gull in sight and mainly Shoveler on the water accompanied by Mallard and Pochard.  But the lone White Stork was till in residence.

Round to the Laguna del Trebol where the reeds certainly seemed in need of a little cutting to give a better view of the occupants.  Mainly Common Coot but finally a collar-ringed Red-knobbed Coot seen in the distance.  Again, plenty of feeding activity form the Chiffchaffs and viewed form the other side of the water better views of the Red-knobbed Coots including birds in their natural state.  At the far side of the water, amidst a handful of Mallard, a single female Pintail revealed itself when deciding to take a stretch.  Back to the other side and, finally, a couple of Herons found hidden amongst the tall grasses.

Returning to the entrance a Black Redstart was seen and a lone Stonechat posed on the island when returning to the Laguna del Alamo Blanco - but the snipe and most of the ducks had long since departed following the arrival of two stray dogs than ran wild across the pool and disappeared out the back somewhere.Perhaps a gun-totting warden might solve that problem!

Check out the accompanying website at http://www.birdingaxarquia.weebly.com for the latest sightings, photographs and additional information.
Posted by Bob Wright - The Axarquia Birder at 09:10