Tarifa with John and Jenny - Day 2

All this reporting from the Tarifa area is supposed to cheer me up but I get that horrible feeling that I am going to feel very frustrated as the magic birds come to light.  But, nevertheless, I am much looking forward to reading about all that is happening down south (actually, I believe it is more west than south!).  As an added bonus, I am pleased that Steve will be able to use my booking down in Barbate tonight so that when he returns on Sunday, having collected Elena from the airport on the way home, I am expecting to eventually see some fabulous photos taken with the new lens.  John's latest report follows. 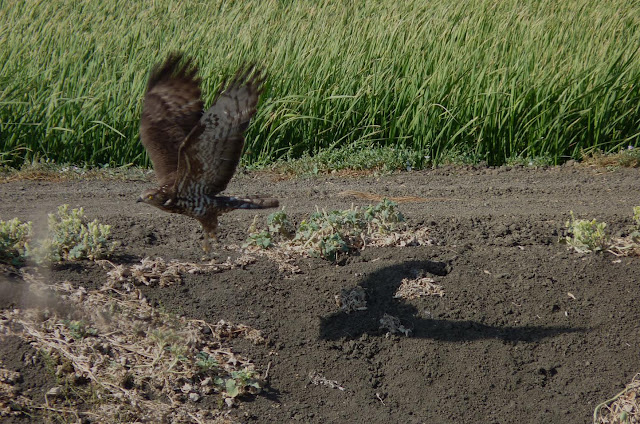 Our aim today was the very erratically productive area of La Janda, while on the way we spotted Rock Doves, Griffon Vulture, Barn Swallows, Hoopoe and a Sardinian Warbler.  As we entered the La Janda area (opposite the Zahara/Barbadas turn), we noted Cattle Egrets, House Sparrows and a couple of Stonechats were on the fence here, Crested Larks, hundreds of White Storks were sitting in the newly ploughed field to the left of the track.  A few Linnets were seen as we approached the raised causeway.  We left the motor here and dropped down to the irrigation canal where we saw male and female Montagu´s Harrier, Glossy Ibis, Little Egret and Common Sandpiper.  Here we also saw several Banded Groundling (Brachythemis leucosticta) as well as Red-veined Darters(Sympetrum fonscolombei).   Another male Montagu´s Harrier passed over the causeway and was last seen patrolling the fields to the right of the causeway.

Moving along the causeway several Green Sandpipers, a ringtail Montagu´s Harrier, more Glossy Ibis, White Storks, Cetti´s Warbler, a Grey Heron and White Wagtails.  At a large area of water devoid of rice plants we found Black-winged Stilts, Little Egrets, Glossy Ibis and Grey Heron. Further along the causeway we noted another seven Green Sandpipers, Calandra Larks, Goldfinches, a  Common Buzzard  gave us great views of its plumage and its eyes, and in the background a female Marsh Harrier was quartering.  As we approached a pumping station a Purple Heron in company with a Grey Heron was spotted.   Lots of House Sparrows with a sprinkling of Spanish Sparrows were seen in this area also.  Overhead a solitary Black Kite was seen scanning the rice paddies.  This put up a female Mallard and Glossy Ibis, while to our right Bee-eaters were heard, but not seen, until the turn off to the Presa (dam).

As we turned off for the track leading to the dam about 40 or so Bee-eaters were noted as were seven Black Kites, Cetti´s Warblers, Cattle and Little Egrets, and as we progressed along the track a Black-winged Kite and a Common Buzzard were logged as well as Jackdaws, Collared Doves and Woodchat Shrikes, while a little further along the track we spotted our second and third Common Kestrel of the trip and good numbers of Spotless Starlings.  We drove down to the bridge where we had a cup of tea and watched the Bee-eaters hawking the fields.  Also here were several Red-rumped and Barn Swallows and House Martins. Walking down to the bridge itself we looked up the stream to the pylons and there it sat in all its majesty a Spanish Imperial Eagle it stayed for about 15 minutes or so then headed off across the fields (Sorry about photo but quite a distance).


We then headed for Barbate marshes where we located  huge numbers of Audouin´s Gulls as well as Yellow-legged and one Lesser Black-backed Gull, the latter two species were noted moving off of the marshes onto the fields as the tide came in.  Also about here were Stone Curlews, Kentish and Little Ringed Plovers, Sanderlings, Little Stints, Redshanks and a single Spoonbill.  A large flock of some two hundred birds (+ or -) comprising of Little Ringed and Kentish Plovers then flew in from the beach area to one of the islands.  A few White Wagtails were seen here and in the distance a good number of Greater Flamingos were noted.  A few Black-winged Stilts and three Black-headed Gulls and a single Northern Wheatear were spotted before we left the marshes.  We did however spot some-one's car in a spot of bother with the tide coming in fast and water close to the door sills. ( I doubt if they will get it out in a hurry!!!!)


Check out the accompanying website at http://www.birdingaxarquia.weebly.com for the latest sightings, photographs and additional information.
Posted by Bob Wright - The Axarquia Birder at 03:36