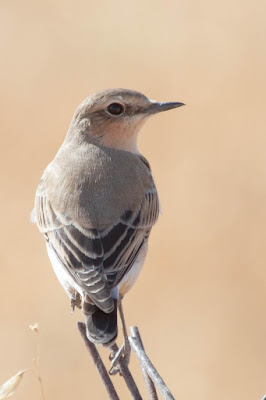 Up early and collected by Steve and Elena to drive over to Huetor Tajar for 9 am to meet up with Mick Richardson and the off to the upper Cacin valley to try and find at least one of the reported forty pairs that breed in this area.  leaving we had a couple of White Wagtails in the car park and then Rock Dove, Stonechat, Jackdaw, Collared Dove, on the wires after we left the motorway along with a few Barn Swallows hunting for breakfast.  However, as travelled north for a short section of motorway Mick mentioned that there were now four pairs of local breeding Black-winged Kites including the almond orchard on our right.  No sooner said than whilst the others noted the resting Buzzard I had the self-same Black-winged Kite lift its wings for a good stretch; marvellous and beautiful.  Just round the corner we picked both Spotless Starlings and a number of small charms of Goldfinches before taking to the numerous tracks through the almond orchards.

Then it was in and out, up and down, just about covering every almond orchard in the territory.  By the time we gave it up after almost four hours we must have seen just about every tree within many, many square miles!  And not a single Black-bellied Sandgrouse in sight. Perhaps it did not help that a few farmers were out at the beginning working on removing old and dying trees and preparing the ground for replacements but even so.  Now if only just one of these ground-loving birds had had a transmitter on its back we might well have been successfully rewarded.

Instead we could well have been accused of larking about as we continually came across both Crested and Thekla Larks.  two small fifty-plus flocks of Sky Larks passed over and even two or three sightings of small numbers of Short-toed Lark.  To cap it we finally found a flock of at least 100 Calandra Larks.  But the outstanding and most common sight was the number of Northern Wheatears recorded they were simply everywhere and especially on the open, ready for ploughing fields.

As we meandered around we came across magpie and Hoopoe and then not only found a Green Woodpecker on one end of a thick log but a Little Owl on the other end, not three metres away. Indeed, the second Little Owl was immediately above in the tree and were to see two further owls before departing.   We even had three Kestrel sightings.  Smaller birds seen were more Goldfinches and a good number of Greenfinches.  A Blackbird flew across and then it was time to find a few warblers with Orphean, Bonelli's and Willow duly logged.

But there were also some special sightings and these included a number of sightings of Common Redstart, an early Tawny Pipit then many more as the morning progressed.  We even had a Common Whitethroat and Pied Flycatcher, Iberian Grey Shrike before finding our last bird and, from my point of view, the enigmatic Whinchat.  The happiness was short lived as passing by a low branch of an almond tree a small twiglet snapped off, shot through the car window missing both nearside passengers and managed to catch me smack in the right eye.  Sad to say, end of real sightings, literally, from my point of view.

Leaving the almond orchards we called in at a small lake nearby motorway on our way back to Huetor Tajar to check out some dragonflies, piking up Barn and Red-rumped Swallow along with House Martin and Wood Pigeon.  On arrival we quickly added Coot, Mallard and nearby Little Grebe.  Scouring the distant water also revealed a few Shoveler, Moorhen and Grey Heron.  Nearer we also had calling Cetti's and Reed Warblers and the sight of both a Blackcap and a Grey Wagtail.

Despite not finding our target bird it was certainly a great morning's birding and my special thanks to Steve for all the driving and Mick for his superb birding and wildlife knowledge and experience. Talking of Mick, I believe there may still be one or two places available on next June's visit to the Pyranees with Loja Wildlide.  Lots of opportunities for Wallcreeper and some exotic birds so make contact with Mick via lojawildlife @gmail.com  (telephone  (0034) 958339630) or, if in difficulty, contact me by email and I will pass on your name to Mick for further information.  Or you could just CLICK HERE for a link.


Check out the accompanying website at http://www.birdingaxarquia.weebly.com for the latest sightings, photographs and additional information.
Posted by Bob Wright - The Axarquia Birder at 12:54