All I can say is if, at worst, you are and insomniac or, at best, an early riser, then it greatly helps if you are a birder with a local patch to explore.  This very much applies to my friends Derek and Barbara Etherton and their exploits yesterday morning as can be seen from the interesting email I received complete with photos.


We were on site by 0600hrs this morning and it was pitch black, you tend to miss the moonlight when it's not there!  Expecting the usual Red Necked Nightjars we were surprised to see Hoopoes taking their place.  Later we disturbed dozens of Crested Larks doing the same.

As light gradually crept into the sky the first of 'reed bed roosters' began to stir. Reed Warblers, Yellow Wags, Barn Swallows, we notice the Red Rumps tend to stay in their nest overnight.  Common Waxbills, Linnets, Spotless Starlings, a large flock here now.  A Water Rail 'squealed' and a Purple Swamphen flew over. A Kingfisher was fishing in the reed bed opening.  Short Toed Larks were many joining in the feeding with Goldfinch, Serin & Greenfinch.

Several Iberian Hares were in their usual area and as Barbara scanned round she picked up on a raptor down by the river.  Obvious that it was 'fishing' we hopped in the car and drove down there quickly in time to see the Osprey rise up from the water and with fish in talons.  Now it must be far too early for this to be the normal wintering bird so was this an early returnee?  Who knows but as far as I'm aware the nearest breeding site is Cadiz area.  Fortunately, I was able to take some pictures and when viewing through bins could not see any colour rings, couldn't make out the species of it's breakfast either!  We continued watching it as it eventually flew away heading up river and inland. 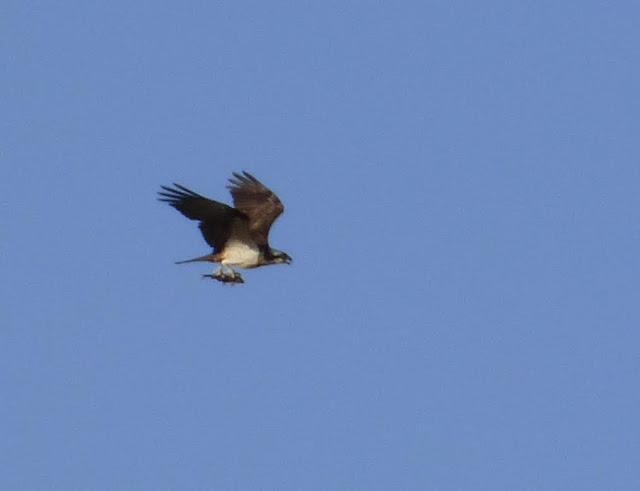 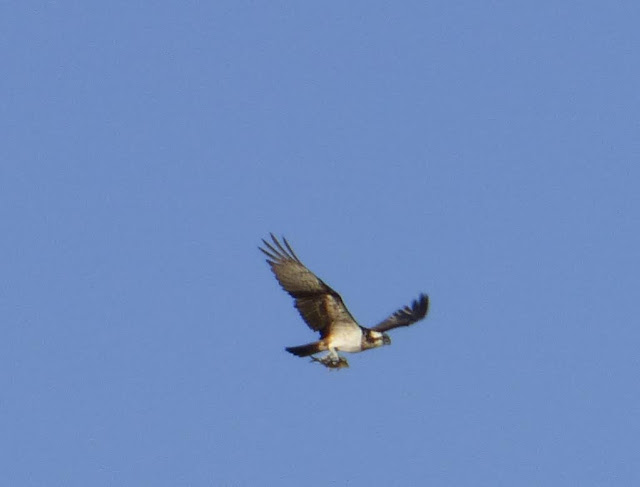 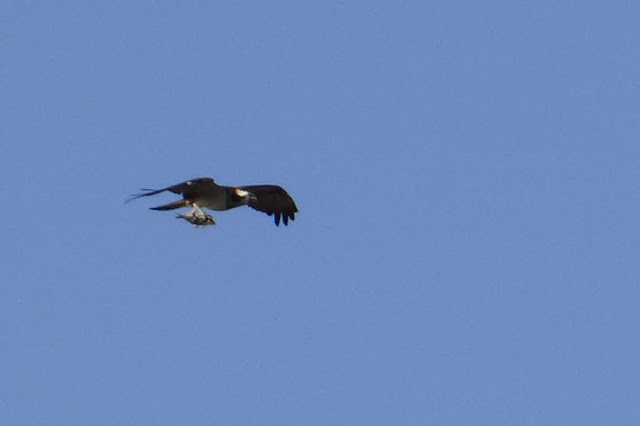 Coming the other way, down the river' we picked up a Black Kite.

The river area itself contained the usual, Little Ringed Plover, Yellow Wagtails, Linnets, Cetti's Warbler, etc.  However, there were numerous Turtle Doves ground feeding mixed in with the finch flock.

Just shows you never know what's going to be about when you head to 'your patch'!


Sounds like a great day and certainly one way to get ahead of the sun and the soaring temperatures.