With the Andalucia Bird Society holding its annual Extraordinary meeting at the Finca Algaba just six kms south of Ronda on Saturday 18 July I decided to drive over the previous afternoon so that i could make use of the "Photography hide" both that evening and early the next day before joining other members of the Society for a little birding before the meeting proper.  And a very enjoyable time it was, too.

The weather was still very hot and the venue is set will inside a wooded area and way for everything and everyone, including shops and restaurants so necessitating a short drive later in the evening to but a small snack and a long drink with friend Olly from Roquetas de Mar in Almeria.

Awaiting transport up to the hide along with Olly, Barbara and Gerry Laycock and Frank Hair we had distant views of both Booted Eagle and Griffon Vulture and a few Collared Doves and House Sparrows busied themselves near the finca itself.  However, once ensconced inside the hide we were soon rewarded with a regular stream of visitors to make use of the shallow pools immediately in front.  All we had to do was sit, observe and photograph albeit the sun was immediately in front of us and conditions deteriorated as the sun dropped.

First on the scene were a number of Blue Tits and surprised to record that there appeared to be more moulting adults than juveniles.  In addition to a regular supply of Chaffinches we had a few Great Tits and then both adult and juvenile Sardinian Warblers.  The arrival of a couple of Bonelli's Warblers was most rewarding and then came the first of a couple of Subalpine Warblers plus a persistent Whitethroat that wanted to make much use of the water available.

Continuing with the warbler theme, we had a juvenile Orphean Warbler and then appeared a Wren.  Seeing these birds so close really gave a better perspective as to actual size, making both the Chaffinch and Wren appear larger the one might expect compared to the somewhat smaller Nightingale and Subalpine Warbler.  Towards the end of our session we were joined by a small family party of Long-tailed Tits with their colouration tinted by the evening sun.  Finally, we also had regular visits from a juvenile Robin which had almost moulted into its red waistcoat and a male Serin whilst, overhead, both House Martin and Common Swift were recorded.

The following morning we were all in the hide by just after 7.30 and soon had our resident Robins and Blackbirds in front of the glass.  Once more we were joined by a good number of Blue Tits, more juveniles noticed this morning, and more Great Tits than last evening.  Still the presence of many Chaffinches but it was the Nuthatch that was to be the predominate bird of the morning.

Lovely to see a newly-moulted Nightingale and the reappearance of both Sardinian and Subalpine Warblers.  once again we had the Long-tailed Tits with us and a couple of Short-toed Treecrepers put in a lengthy appearance, especially on the dead tree less than twenty metres away.  Whilst both Common and Pallid Swifts were joined overhead by Barn Swallows and House Martins, our Bonelli's Warbler once more graced us with its presence and the the arrival of a Jay.  First seen hiding in a neighbouring tree it was not long before it was right in front of us and filling our lenses.  Our final bird at the hide was a lone Wood Pigeon and then it was time to join the rest of the group for short drive up into the nearby Serrania de Ronda. 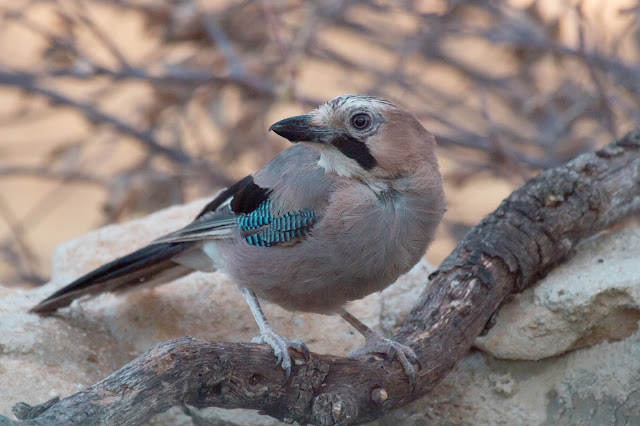 The way up ;ed to some fabulous warbler habitat and we managed to record Dartford and Spectacled Warbler along with Woodchat Shrike, Stonechat, Corn Bunting and both Northern and Black Wheatears.

Meanwhile, overhead, lovely view of a relatively close Goshawk and then a trio of Short-toed Eagles and a single Booted Eagle.

On a practical note, I had been ill most of the preceding week and really ought not to have travelled over to Ronda in the first place but glad that I did.  In photographic terms I had some wonderfully close views of a range of small birds that tend to be only seen at a distance but my settings appeared to be all wrong so somewhat disappointed.  I suspect a mixture of using wrong apertures through the glass an, at the same time, not really being in a fit state to actually be aware of what was going wrong to make the necessary adjustments.  But, on a positive side, it was lovely to both see the birds and make a reacquaintance with some lovely birding friends whose company I much enjoyed and appreciated.  Thank you all, you know who you are.

Check out the accompanying website at http://www.birdingaxarquia.weebly.com for the latest sightings, photographs and additional information.
Posted by Bob Wright - The Axarquia Birder at 08:37