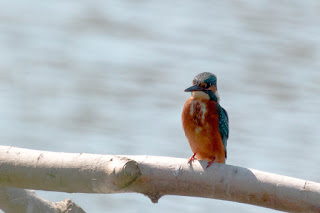 Feeling much better so after collecting friend Steve Powell we spent the morning at the Charca de Suarez reserve on the western outskirts of Motril.  My word how the site has changed in the last few months with the new hide overlooking the large scrape and two more hides that look as if thy may be up and running very shortly.  The good weather also helped and we were both more than pleased with the number and exciting range of birds recorded.

Arriving on site via "Turtle Dove Alley" where we found House Sparrows, Zitting Cisticola and Crested Lark, were greeted by a handful of Collared Doves and very quickly located the calling Turtle Dove.  Indeed, we to see regular sightings of Turtle Doves throughout the morning.  A quickly disappearing Blackbird as we made our way to the Laguna del Taraje where, having settle in, we soon found a Little Bittern and then the first Kingfisher of the morning.  Add on both Little Grebe and Coot before departing to the new hide overlooking the Laguna del Alamo Blanco and recording a juvenile Spotted Flycatcher and Goldfinch on the way.


What a great hide this is with views along the water and scrape from sensible sized windows with a large rest platform and seats that actually match the viewing window, so unlike many Spanish hides where the windows seem to have been made for those with very restricted heights!  Within seconds we were looking at Little Egrets and Mallards, the only ducks that seemed to be present at the reserve, along with Black-winged Stilts.  More detailed observation then revealed a single Little Ringed Plover and the trio of Common, Green and Wood Sandpiper.  Whist a Grey Heron flew over our upward gaze also picked up House Martin, Barn Swallow and Common Swift feeding on the wing whilst on the mud below first a White then juvenile Blue-headed Wagtails. 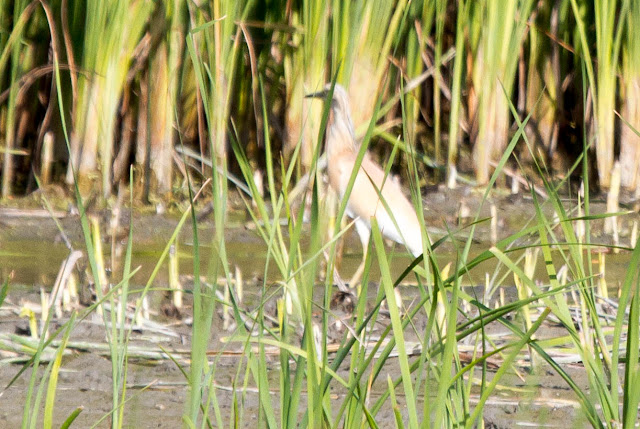 But things got better when not only another Little Bittern presented itself but a Squacco Heron dropped in.  Whilst watching this pair, barely three metres apart, a Water Rail decided to come out from the reeds and wander, run at times, back and forth.  Also present were a small number of Red Avadavats, Moorhens and a single Redshank.  More visits from the local Kingfishers and then, hidden in the grass in front of us, a very small waxbill, not the usual "Common" variety by one of the local resident and breeding population of Black-rumped Waxbills Estrilda troglodytes. (Apart from the black on the rump also having a distinguishing white marking in the event area.)  Finally, our first Sand Martin of the morning then we were to see many more over both the Lagunas de las Aneas and del Trebol.

The Laguna de las Aneas as expected contained a good number of Coots and Mallards along with a quartet of Grey Herons and the usual Moorhens and Little Grebes.  Lovely also to see all the juveniles paddling alongside their parents but the the Kingfisher reappeared once more and gave some really close views.   More hirundines overhead and a very small number of juvenile Lesser Black-backed Gulls and Black-headed Gulls, the latter with their young of the year.


The final walk around the site calling in at both hides overlooking the Laguna del Trebol produced the expected Red-knobbed Coots and also provided a flock of Serins and a single Red-rumped Swallow.  The end to a lovely morning and good to feeling better and able to take up the binoculars once again.

Check out the accompanying website at http://www.birdingaxarquia.weebly.com for the latest sightings, photographs and additional information.
Posted by Bob Wright - The Axarquia Birder at 09:45