It may be unlucky day back in the UK (the equivalent in Spain is Tuesday13th) but for me the day could not have got off to a better start. Leaving the house at 8am I disturbed three Blue Rock Thrushes that had roosted in a bush at the bottom of the drive, drove round the corner and a Turtle Dove took off in front of me and I had not gone 500 metres!  Naturally, there many Thekla larks to be seen as I drove down the mountain and off to Torre del Mar where I joined Steve and Elena Powell (Monk Parakeets resting on the overhead wires) for the drive over to the Antequera area where we met up with Mick Richardson to see if we could find that elusive Rufous Bust Chat (Rufou-tailed Scrub-robin) of which it is reported that there may only be a couple of breeding pairs in Malaga Province.

No sooner had we arrived on site (protected and "secret" for obvious reasons) than, amidst the numerous Blackbirds, Barn Swallows and House Sparrows. we found our bird.  Sitting on a fence top about fifty metres ahead we were bust taking record shots, even if the Rufous Bush Chat was facing away from us, just in case this might be the only opportunity.  A Collared Dove wandered about, Crested Larks seemed to be in good supply and even a handful of Common Swifts flew over us at low level.

With the bird apparently at ease and regularly using the same stretch of fence we moved the car closer and sat inside hoping for that closer look.  Yes, up on the fence it came again and again along with the Crested Lark that was obviously also nesting nearby.  A pair of Linnets joined the far end of the fence and Mick even had a couple of distant Gull-billed Terns over the far hill.  But could we get an even better view?  Once more we moved the car and backed up the return fence in the hope that the Rufous Bush Chat might actually perch on the corner post and so enable us to take a photograph or two without having to try and focus through the near fence.  The bird only made one such move; but we there ready and waiting and all three of us got some great shouts of this very scarce bird.  Absolutely marvellous! 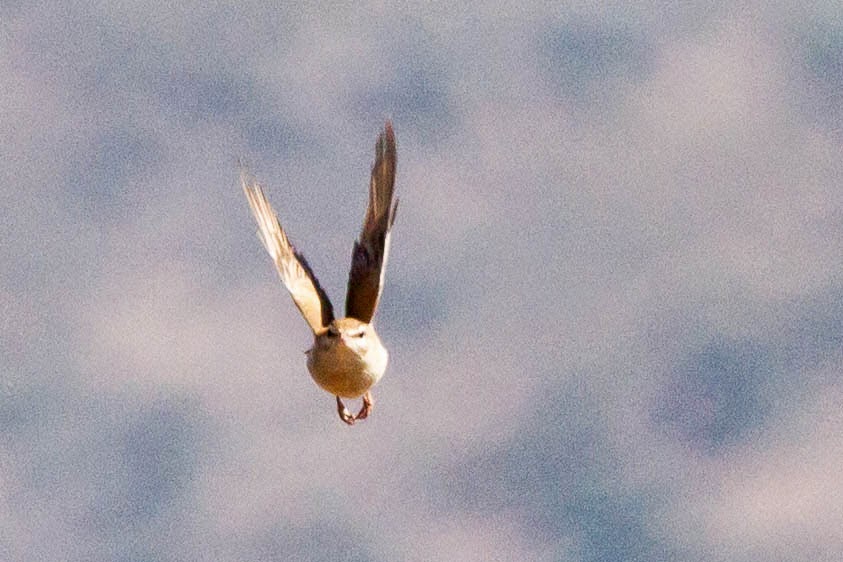 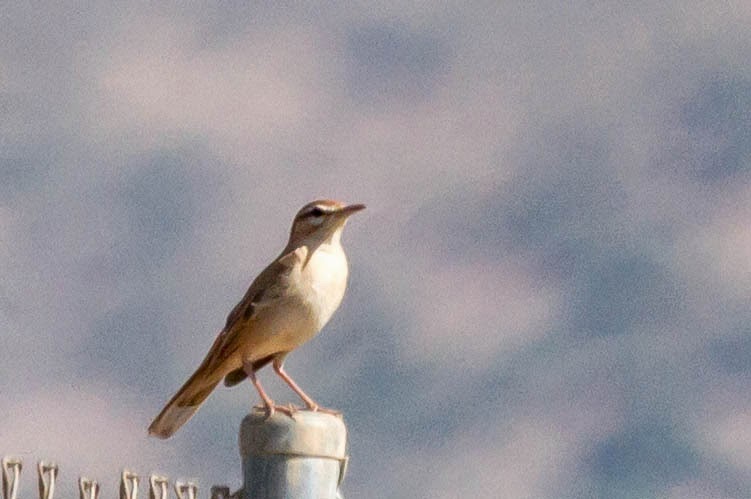 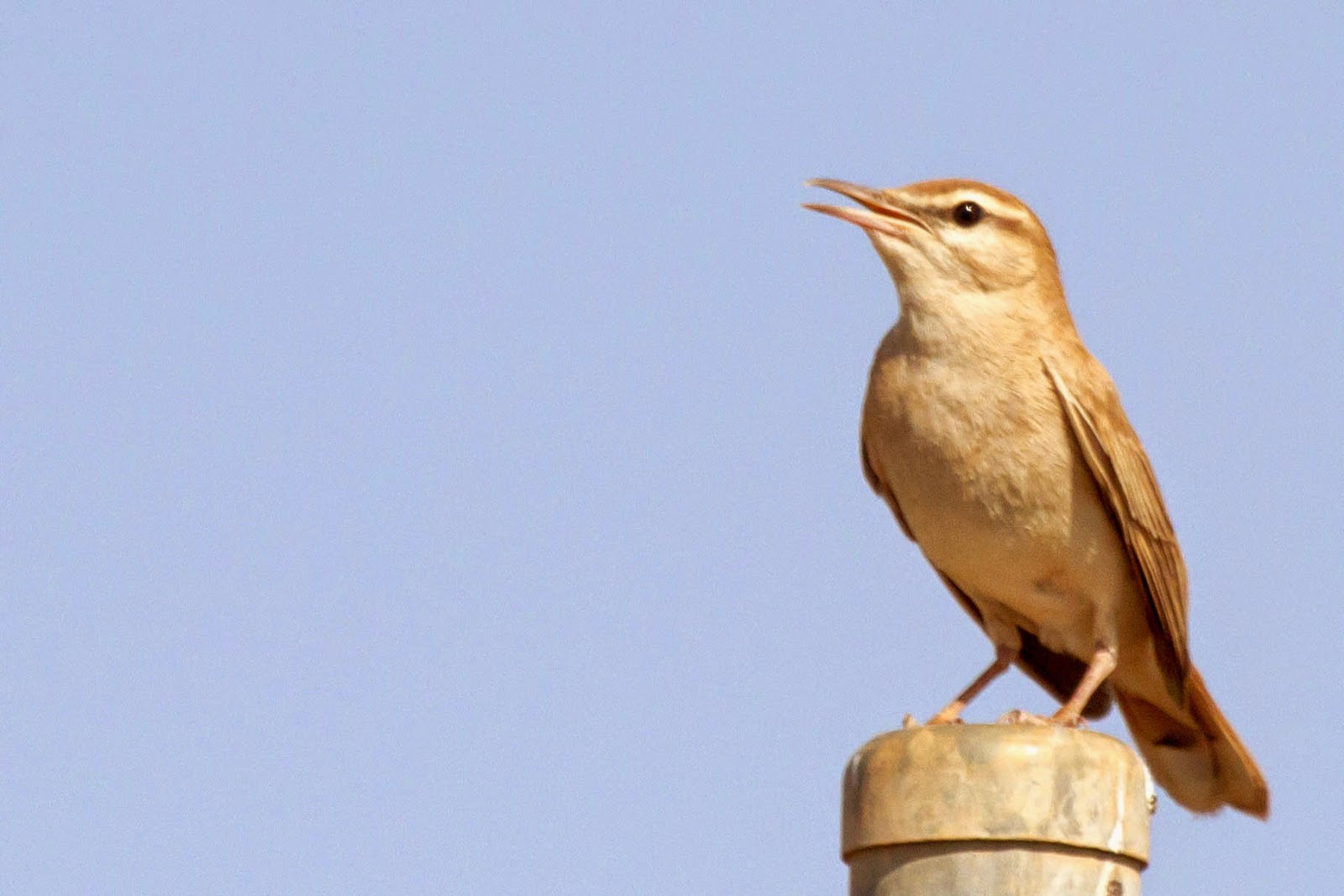 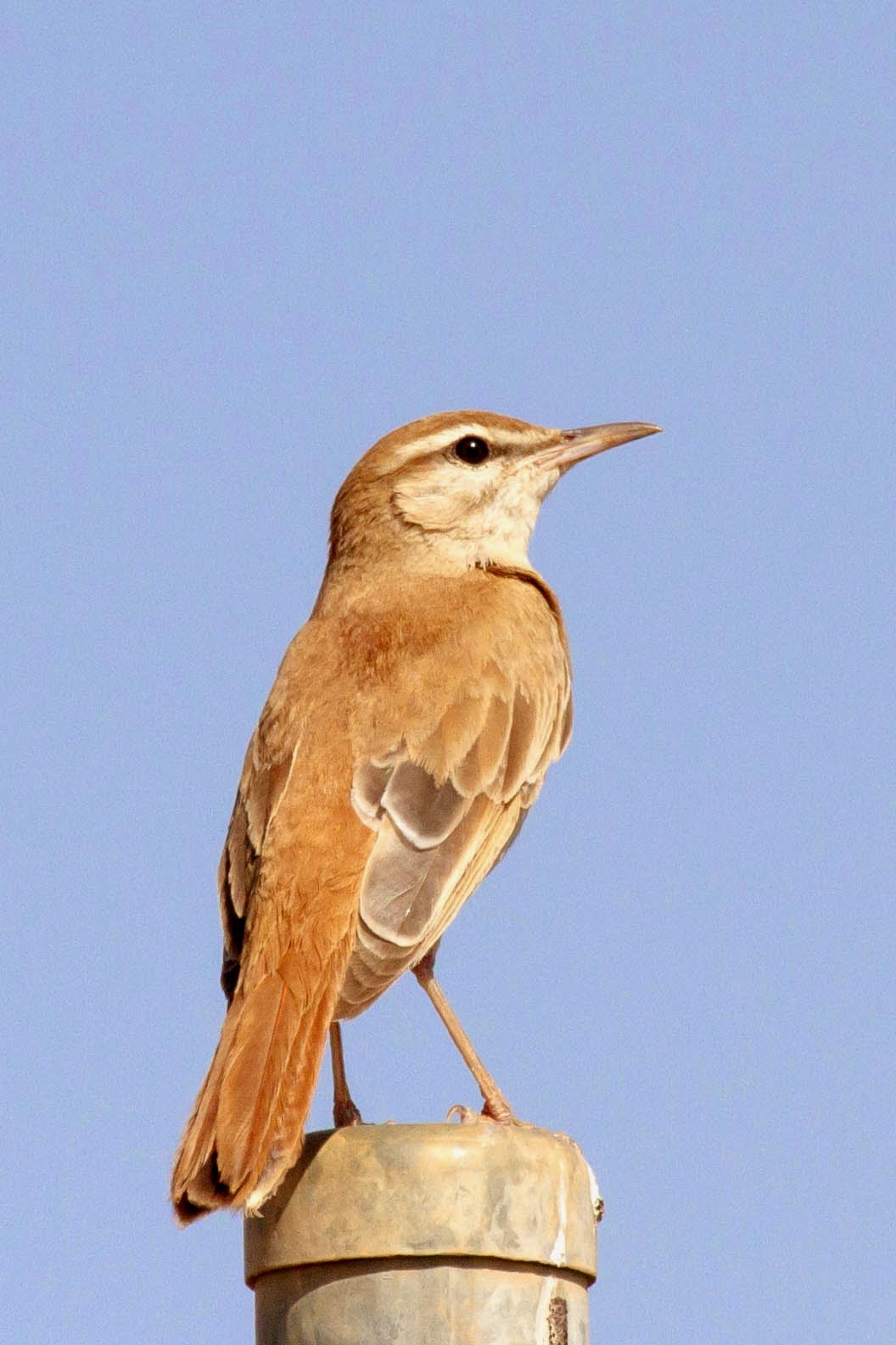 What to do now?  We were not going to get a better or closer view so we decided it was time to head off to the Arroya de Marin near Archidona for some butterfly and dragonfly searching.  No sooner had we started the drive that a most handsome male Montagu's Harrier passed low to our right and, if one was not enough, a second male Rufus Bush Chat was on the wires less than 150 metres away!  The perfect end to the morning.

No sooner had we arrived at Marin than it was obvious that both Bee-eaters and Barn Swallows were in residence and in good numbers.  Lots of young Barn Swallows taking their first flights and looking quite "grey" against the blue of their parents.  Whilst Steve and Mick had their face almost on the ground, I wandered on along the lower track, looked up in the dead branches at the top of a smallish tree and their was a Hawfinch just waiting to be photographed.  Steve had seen but never photographed a Hawfinch, one of his target aims, so I could not resist the temptation to wander back and ask if he could identify the bird I had just taken.  (What a naughty boy I am!) 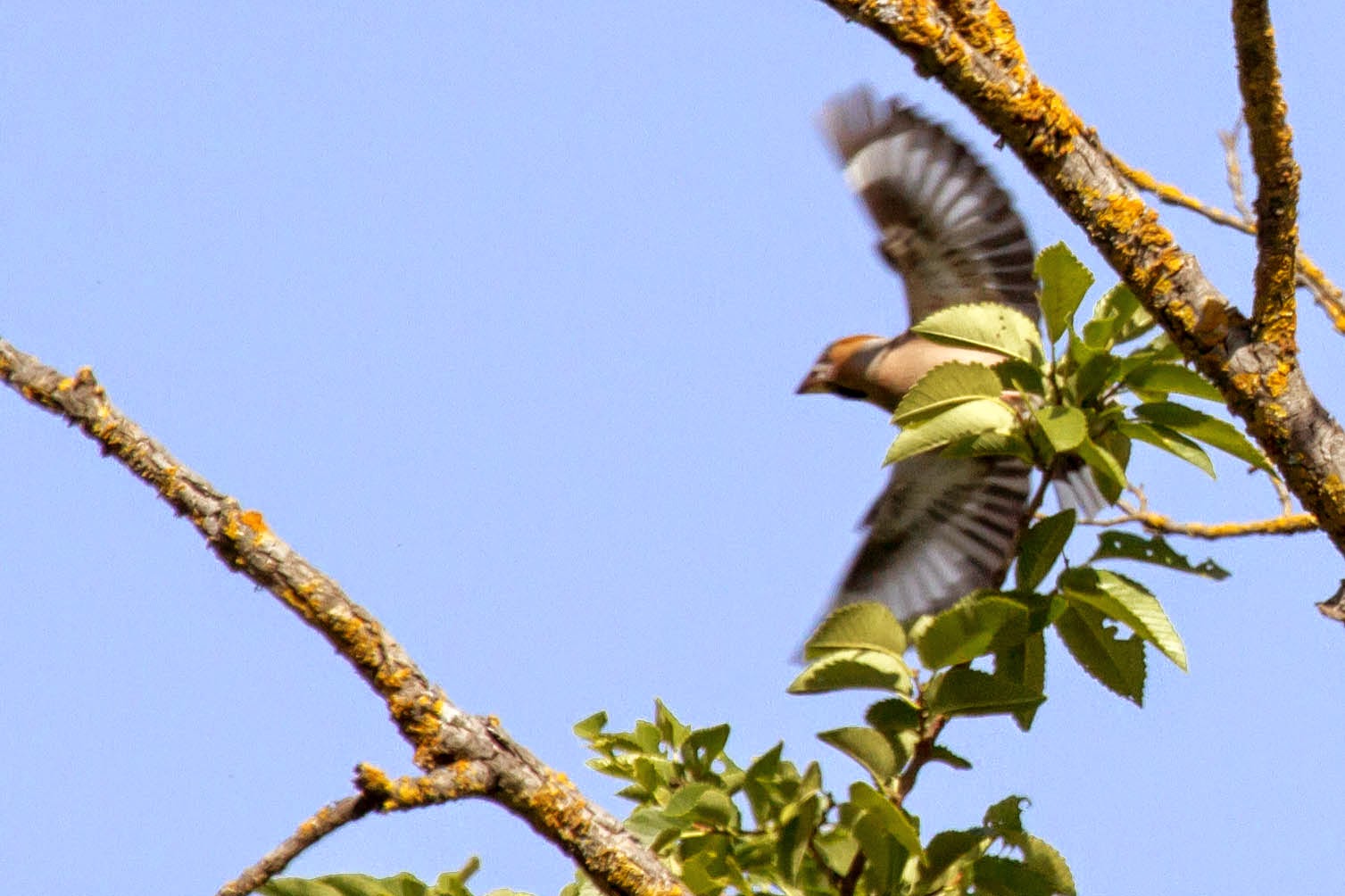 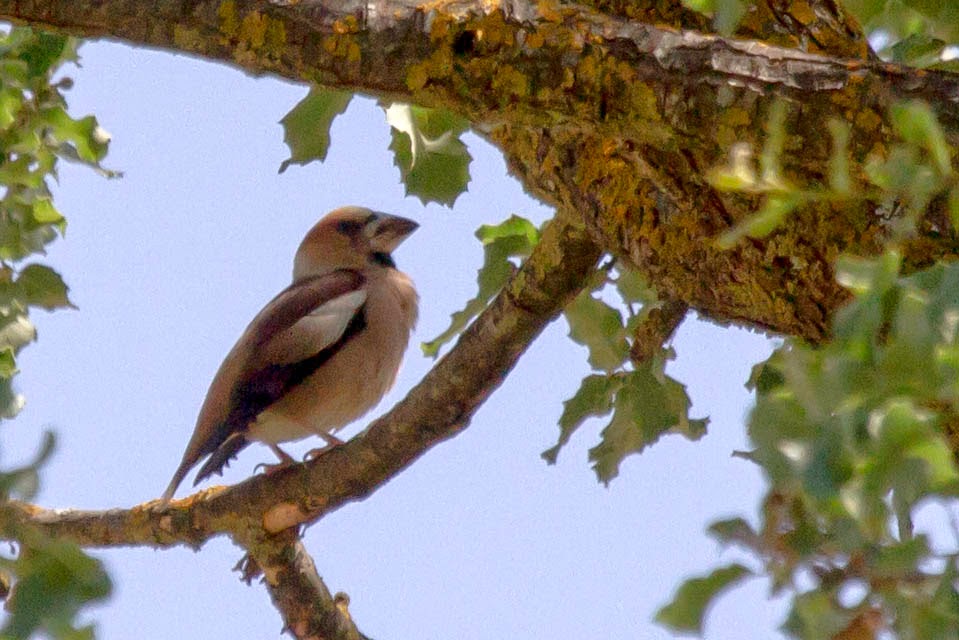 But not to digress.  There were numerous butterflies and dragonflies to be seen, recorded and photographed and whilst i probably only immediately recognised the Cleopatra Gonepteryx cleopatra, no doubt a full sighting report will appear on one or both of Steve and Mick's blogs (see end for links).


Back to the birds.  Mick had heard a distant Great Spotted Woodpecker and then, almost in front of us, a very loud and clear call from a Green Woodpecker.  The others were looking down whilst Elena and I looked up and ere long I watched a warbler land in the nearby large tree to which the Hawfinch had disappeared and there was a Subalpine Warbler working its way down to the lowest branches at bush level.  Watching this tree we then saw another pair of Hawfinches fly in and managed to get a clear view through the canopy.  Meanwhile, a Chaffinch had disturbed the Hawfinch by the time Steve arrived with his long lens but he did manage to get a shot of the resting Rock Sparrow.  A Greenfinch was seen along with more Bee-eaters as we made our ways back to the cars and then, looking out of the windows on our side, we watched a female Sardinian Warbler moving through a low bush not three metres away.

There were regular fly-pasts by Wood Pigeons, the occasional Spotless Starling and many Blackbirds.  Elena picked up a Blue Tit and we were constantly serenaded by the singing/calling Golden Orioles.  Moving on down the main track we were welcomed by a Hoopoe and a departing Blue Rock Thrush from the old ruin as made our way to the first river crossing.  Once again, Steve and Mick were after their Bs and Ds so Elena and I wandered on up the track to yet more calling Golden Orioles.  A small family of Long-tailed Tits were feeding in the trees to our left on the bank of the stream and then we saw a Golden Oriole fly across the track at a very low level.  Amazingly, it then reappeared and seemed to perch in a shaded but relatively open bush giving me chance to get a few shots from about fifty metres distance.  Before flying of it was joined by a second bird which, being more in the shade, gave the appearance of a female but looking at the processed shot I suspect it was another male. 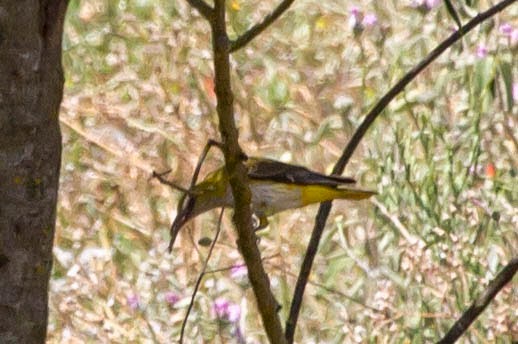 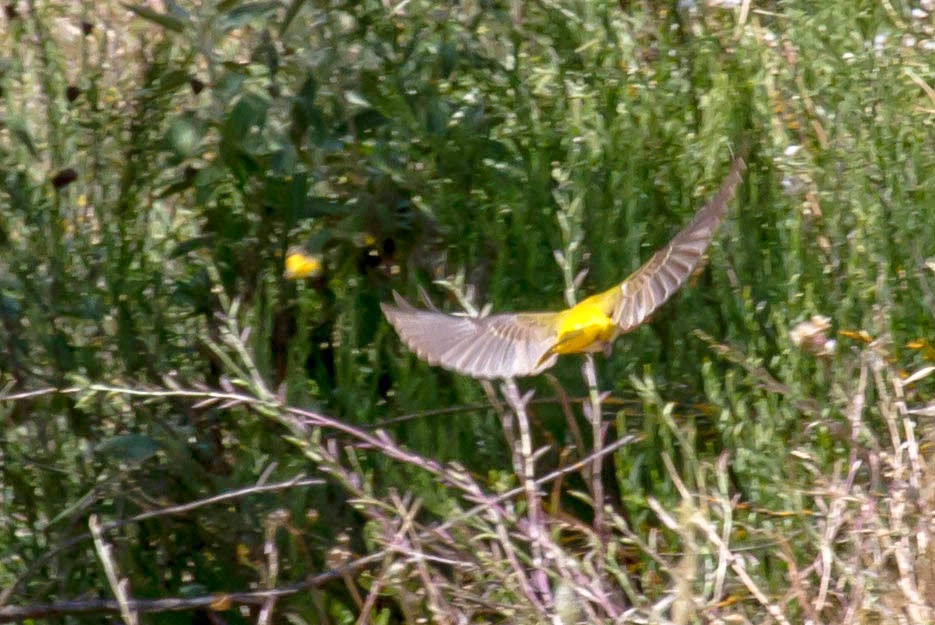 Our final stop was at the second ford where there were yet more dragonflies to be recorded.  Serins were moving around along with Goldfinches and a pair of Crag Martins quartered the nearby cliff face.  To our right, on the other side of the stream, Elena and I watched a female Ibex with her new-born youngster as they watched us before moving slowly away. Then it was once more to our final site near Salinas where the rare dragonflies that were desired awaited Steve and Mick.  Meanwhile, there was a Lesser Kestrel overhead and a couple of Jackdaws along with a single Rock Dove seemed to have taken over the small ruin.  A number of Azure-winged Magpies were seen and even a Red-rumped Swallow flew over our heads to give a little variety from the many House Sparrows and Crested Larks.

All in all, a marvellous day's birding and many thanks to my friends for such lovely company.


More on buttrflies and dragonflies visit the blogs of Steve and Mick as follows:

Check out the accompanying website at http://www.birdingaxarquia.weebly.com for the latest sightings, photographs and additional information.
Posted by Bob Wright - The Axarquia Birder at 12:44