A beautiful clear, sunny and fresh start to the day so what better than a couple of hours down at the local patch, the mouth of the Rio Velez at Torre del Mar.  Thekla Larks and loads of White Wagtails to see me off the mountain and down to Lake Vinuela, followed by dozens of Collared Doves as I passed through Trapiche and then the usual welcome as I parked on the track below the road bridge from the resident Rock Doves and the first of many Moorhens.  A small flock of ten Sanderlings were within sight along with a couple of Dunlin and very many Chiffchaffs feeding in the nearby bushes and meadow. 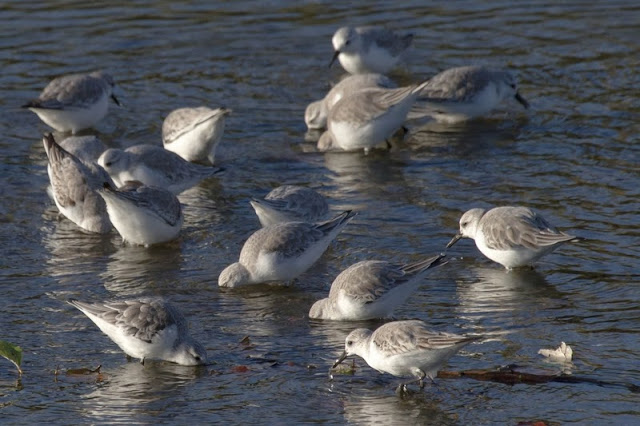 Following Thursday afternoon's heavy rain the river looked most inviting, even luscious.  Inviting mud banks and flats for the waders, shiny gravel and beautiful green islands and banks.  No shortage of water and with no exit to the sea a well-developed lagoon at the mouth.  Walking down towards the new hide opposite the pump house I had regular Blackbird sightings and then a couple more Mallards along with both White and Grey Wagtails.  Mallards were not the only ducks in residence with a quintet of Shovelers sheltering under the trees on the near bank and then, almost opposite the hide, a quartet of Teal.


Either the Sanderlings had moved down river or there were two distinct flocks with another thirty-three recorded along with two more, or the same, Dunlins.  A Kingfisher flew upstream and, before me, a pair of Black-winged Stilts were feeding.  A Cormorant moved off down to the sea and I was later to see many more and a single Little Egret presented itself along with a Grey Heron.  The Chiffchaffs continued to reveal themselves by the dozen and a large flock of Spotless Starlings rose up to rest on the nearby electricity wires.


From the new hide I could see a good-sized mixed flock of gulls including about ten Mediterranean, a handful of Black-headed and a number of both Lesser Black-backed and Yellow-legged Gulls.  Something to look forward to on my return from the beach and the chance of scoping for an Audouin's.  On the nearby meadows were a number of both Goldfinches and Serins along with the occasional Zitting Cisticola, a single Robin and a pair of Meadow Pipits.  Returning to the hide I was most disappointed to find an inconsiderate chap walking his two dogs, off lead and running free, so dispersing all the birds previously on the site.  A scope of the shore and small islands did reveal a single Bluethroat and the, flying low, a single Mediterranean Gull with an almost full black head.

To give the gulls chance to return I took a short ride to the eastern growing fields which produced both Crested Lark and House Sparrows.  Returning to the hide I had a Sardinian Warbler and numerous Stonechats along with more Chiffchaffs but the gulls did not return.  Why?  Dad had taken his two very young children for a cycle along the track and made use of the newly-installed cycle racks so that the family could go for a walk an play alongside the river's edge!  What next?  If the hide survives the ravages of teenage youth then, perhaps, the cycle rack will be well-frequented, the hide used as a deposit for personal belongings and the meadow become a football field.  I hope not; perhaps the "powers-to-be" will keep an eye on this new and encouraging facility to see that it is not abused.

Making my way back to the main road I had a simply gorgeous male Black Redstart followed by a solitary Common Sandpiper.  Then it was back up the mountain with its Thekla Larks and Chaffinches and, this time, a flock of over forty Crag Martins on and around the wire below the house.  What a welcome home and not too bad to record 39 species in a little over two hours!

Check out the accompanying website at http://www.birdingaxarquia.weebly.com for the latest sightings, photographs and additional information.
Posted by Bob Wright - The Axarquia Birder at 13:30