Yesterday Granada province, the next day Malaga.  It certainly seems as if John and Jenny Wainwright have got the right idea whilst the weather remains reasonably calm fr following an initial birding outing to nearby Huetor Tajar yesterday today, Wednesday, saw them at the Campillos lake of Laguna Dulce for a couple of hours, so very little walking requited t make the hide and enjoy the birds of both water and surrounding reeds and vegetation.  What next; an email tomorrow about a third successive day's birding to the mountains?

A sunny day but dark clouds looming, though no rain fell.

As we were in Antequera, we decided to pop along to Laguna Dulce for a couple of hours.  It was beautiful sunshine albeit rather cold in the shade, although on the horizon some very dark clouds were building up.  A Black-shouldered Kite was found on a pylon close to the Sierra Yegas/Piedra turn off; also Collared Doves, Spotless Starlings, a Common Kestrel and Common Buzzard were seen in that area.

Jenny´s first sighting from the hide was of a couple of male Tufted Ducks - don´t often see these up here.  The birds were in amongst Pochard, Common Coots, Black-necked Grebes, White-headed Duck and a few Mallard.

Three Marsh Harriers were then spotted - one female and two juveniles - the latter causing the Coots to scatter as they made mock attacks on them.  A few White Wagtails were seen, as well as Goldfinches, House Sparrows, a male Blackcap, two Robins and two male Black Redstarts.

On our return journey the Black-shouldered Kite was still about as was the Common Buzzard (but in a different location).  Three Southern Grey Shrikes on the telephone wires and as we passed the new high speed railway bridge at Antequera a huge flock of some fifty or so Jackdaws flew across the face of the cliffs. 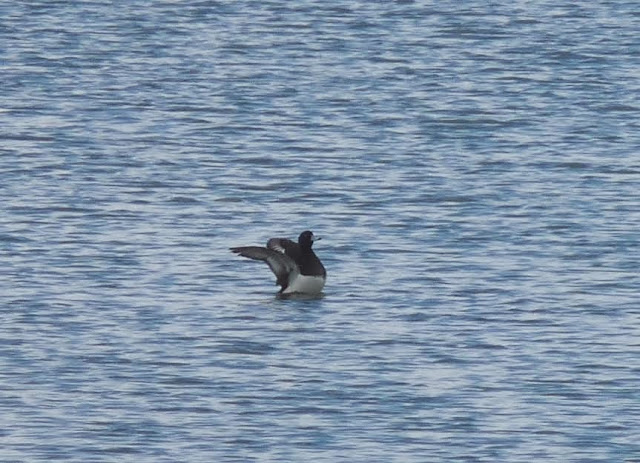 Good to see you have lost none of our observational skills, John and, I must admit, I was more than surprised to read that you actually picked up a singing Willow Warbler.  What was that doing here rather than with his cousins down south of the Sahara enjoying the warm sunshine and accompanying insect life?  I know we have experienced the first snow in Yorkshire and the wind, following a clear and calm day yesterday has more than picked up in readiness for some really bad, cold weather but you guys must still be enjoying some sort of "Indian Summer" so please make sure you save some for Jenny and I to enjoy!

Posted by Bob Wright - The Axarquia Birder at 08:31