Back in the birding saddle!

Just received great news from my friend John Wainwright and in time for Christmas.  Having spent the last couple of months confined to quarters with just a couple of outings these last few weeks riding shotgun to Jenny, it was good to read that John s once more behind the wheel and in charge of his own destiny and where he would like to go birding.  And where else would he go first but to his favourite local patch up the Sierra Loja.  Indeed, he even manage to find not only a sunny day, as did I for my mountain visit to the Sierra Tejeda, but also found the temperature reasonably agreeable having reached the summit.  With John, once more, behind the wheel, does this mean that Jenny will now have the chance to regain ownership of the camera?  So it is very much a welcome back John and Jenny, lots of good birds recorded, and I look forward to seeing you both in January.

As with John and Jenny, I certainly wish all my readers a very peaceful Christmas and a most happy and healthy New Year; a year in which all your birding temptations and "New Year's Birding Resolutions" may be fulfilled.  Just think about it, an hundred species recorded before the end of January; a year's total of 250 plus achieved; sightings of Wallcreeper, Cream-coloured Courser, Dotterel, Eleonora's Falcon, visiting Long-tailed Duck and Allen's Gallinule, Little Swift, Dupont's Lark, Rufus Bushchat, Moustached Warbler, Isabeline Shrike, Hawfinch and Ortolan Bunting.  There should be at least one species there for everyone so  I expect to hear about some fabulous sightings in the coming twelve months.  Dream on fellow birders - and may they all come true!

Now to John's report and, on this occasion, all the photographs were taken by himself.

We looked at the weather forecast this morning and as today was the only day that rain was not forecast for, we decided to go up to Sierra Loja to try to locate the Alpine Accentors.  So after breakfast at the Mirador we started off, seeing en route, Wood Pigeon, Collared Doves, Chaffinches, Serins, Spotless Starlings, House Sparrows and Chiffchaffs.

Our first stop was the hidden quarry, where we located three female Ibex and while watching them a Dartford Warbler flew into the top of a gorse bush just to their front.  Jackdaws were heard above the quarry but not seen, as was a Kestrel.


So onto the cliffs where we saw another three Dartford Warblers, Stonechats and a large number of Jackdaws were feeding on the lower slopes. A large flock of birds landed on the upper slopes and among the flock we found Meadow Pipits, Rock Buntings and Goldfinches, while on the cliff top itself we saw two Black Wheatears and at a lower level a male Black Redstart and two Thekla Larks. Also here we saw several Jackdaws picking up rocks and discarding them, so as they rolled down the mountainside and landed on the track - I take it they were looking for insects underneath the rocks – watch out below!!.

Between here and the working quarry we saw a Little Owl, Thekla Larks, another Dartford Warbler, Stonechats, Chiffchaffs and several female Black Redstarts.


The lower of the ponds (Charco de Negra) had some water, but not iced up as the top one was, although neither of these bodies of water attracted any birdlife while we were there.

So onto the fossil cave area and beyond, where we found Great Tits, more male Black Redstarts, two Ring Ousels, six Alpine Accentors, Rock Buntings, a male Blackbird, more Chaffinches, two Mistle Thrushes and a lone Greenfinch. The Iris planifolia are well in flower and quite a good show of them were seen. 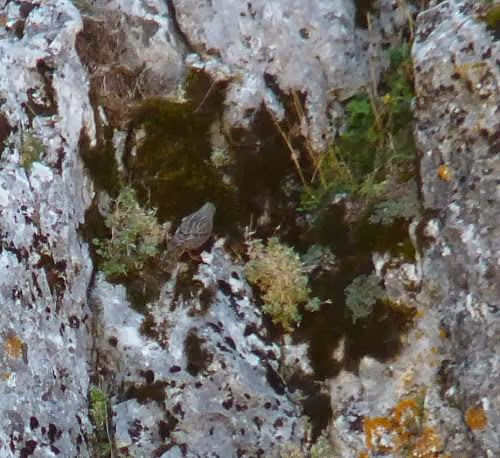 On our return journey we saw another two Little Owls, a Black Wheatear and a Booted Eagle cruised past over the pylon wires.


Great report John and the Iris looks fabulous; something for the rest of us to make sure we look out for when up in the mountains.

Check out the accompanying website at http://www.birdingaxarquia.weebly.com for the latest sightings, photographs and additional information.
Posted by Bob Wright - The Axarquia Birder at 01:36