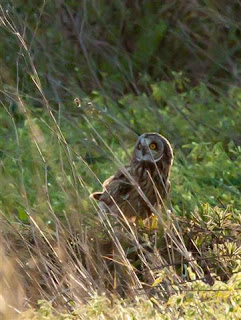 Friends back to the airport in the late afternoon for their return journey home so down at the Guadalhorce, Malaga jest before 5 pm in the hope that we might see the current resident Short-eared Owls.  Greeted on arrival by a pair of over-flying Jackdaws and a Collared Dove plus a gorgeous male Black Redstart, we were up on the river bank and crossing the entry footbridge amidst numerous White Wagtails and a few Coots on the river itself along with the resident Rock Doves under the road bridge.  In front of us there was a constant flow of the numerous Cormorants as the winter roost continued to increase in size and must now total in excess of 150 individuals.  In addition, there were scores of Grey Herons to be seen plus the occasional Little Egret.


I had no sooner crossed the bridge and started to walk to the Laguna Grande and the main hide when, not so much a couple of Zitting Cisticolas bu the first Short-eared Owl flying low over the path in front.  But where was Jenny?  She had started going back tot he car but, from the bridge itself, was able to follow not only this individual but a further three that were quartering the area.  Thinking that I had not seen the owls, she telephoned to let me know but the conversation was rapidly ended as I concentrated on trying to follow the birds and obtain a half-decent photograph.  In the end, there would appear to have been a pair of the birds quartering the large field between the bridge and the Laguna Escondida whilst a bother couple were working the narrow stretch between my path and the (western) river.


Lovely to see these birds but I did press on to check out the main water and all its Cormorants and Herons plus both Little and Black-necked Grebes, Mallards and a trio of Shovelers.  There was even a single juvenile Flamingo resting on the water.  Add on a Robin, a small flock of Spotless Starlings, Yellow-legged Gulls, a number of Chiffchaffs and those noisy the neighbours the Monk Parakeet and the species count was increasing by the minute.


The short walk round to the Laguna Escondida produced Teal, Pochard and White-headed Duck along with a lone Black-winged Stilt.  A female Marsh Harrier and a pair of Sardinian Warblers plus both Serin and Goldfinch added to the count and then it was back to the main track to try and get a further view of the target bird, the Short-eared Owl.  Success but only for a short while as the bird was now in front of the sun but did come to rest in the grass where I was able to get a further look.  Finally, both Stonechat and Blackbird to left the final tally to 33 species in just over the hour before making our way back home.

Check out the accompanying website at http://www.birdingaxarquia.weebly.com for the latest sightings, photographs and additional information.
Posted by Bob Wright - The Axarquia Birder at 11:03