Awake early to a calm and cloudy day so, with rain forecast be mid-morning, I was down at the Guadalhorce in Malaga by 9 o'clock.  In the event, whilst remaining very dull and cloudy, there was no rain.  Lovely to meet a fellow birder, Malcolm Mitchell, who comes over on a monthly basis from Edinburgh to do a little birding in the area and then on to Torremolinos to see my old friend Andy Paterson before driving back up the mountain to Casa Collado.  And still no rain for the rest of the day; we could have gone over to Fuente de Piedra as originally intended after all.  But what of the birds, all 44 of them?

Approaching the footbridge there was a steady stream of Cormorants moving in and out of the site along with the first of a number of Robins.  The stone bank to the river contained many Serins and a large charm of Goldfinches along with Blackbirds, House Sparrows and Rock Doves.  The river itself was very quiet with just a single Moorhen.  However, a Blue Tit did take the opportunity to cross over to the west.  Passing the first Black Redstart I approached the Laguna Cassillas hide where, not really surprising, I discovered that water levels were extremely high.  The same was to apply to all the ponds and river with water stretching from bank to bank and, as a result, other than a handful of Black-winged Stilts, not a single wader was seen all morning.  The water itself was not over busy with a few Coots, a handful of Mallards a female White-headed Duck and a dozen or so Teal.  Then a pair of Gadwalls appeared whilst, overhead, the Crag Martins were busy feeding and the same was true of the Chiffchaffs on the bank in front of the hide.


The neighbouring Wader Pool was even quieter with just a pair of Black-winged Stilts and a lone juvenile Flamingo at first.  However, patience did reveal both a Little Grebe and a few more Teal.  A pair of screaming Monk Parakeets flew over and then more Chiffchaffs appeared to feed below me. On the opposite side of the track a handful of horses had been delivered to feed on the grass and these attracted a handful of Cattle Egrets.  The first Marsh Harrier of the day pt in an appearance as it drifted inland over the  waters and then back towards the sea.


The walk down to the Sea Watch produced a Sardinian Warbler, Stonechats and White Wagtails.  The old river, Viejo Rio, held a pair of juvenile Flamingos and a couple of Teal but nothing else.  From the Sea Watch the sea held a reasonable number of Gulls, mainly Black-headed plus a small number of Yellow-legged.  However, I did manage to see a couple of Sandwich Terns feeding alongside the gulls.  The return walk to the previous hides produced Meadow Pipit, Crested Lark and calling Cetti's Warblers plus a female Pochard had appeared on the Laguna Cassilas.


Again, very few birds on the Laguna Escondida but we did have a small number of White-headed Ducks at the far end and a similar number of Pochards.  A couple of Little Grebes and a single Black-necked Grebe made up the numbers.  A "colony" of Spotless Starlings (no Waxwings here) were settled in the old tree near the footbridge and so on to the Laguna Grande and its main hide where, a little later, I was joined by Malcolm. 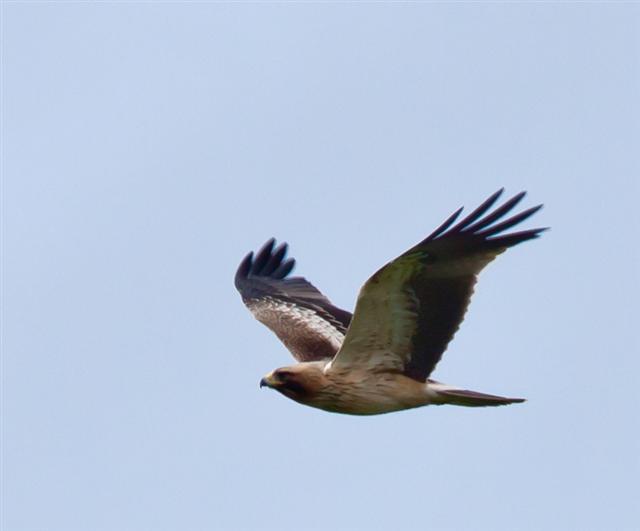 No gulls present but good numbers of Cormorants and at least ten Grey Herons settles around the pool.  The three juvenile Flamingos had crossed over form the far waters and were now resting on the distant island to the right.  At least three Marsh Harriers were also at their ease and then the sight of the first Booted Eagle roosting in a tree to my left and later joined by two more individuals.  Also with the Cormorants in the trees at the back of the water we had a restless Kestrel and then she was joined by a much more settle Peregrine Falcon.  In front of the hide the ever-active Chiffchaffs were joined by a Zitting Cisticola whilst in the neighbouring pool I was able to watch the movement of a Shoveler between the trees.  Finally, a second Little Egret arrived looking very white as if it had just flown out of the shower.  Whilst watching the distant resting Marsh Harriers we had the pleasure and surprise of seeing a close-to-land Gannet above the tree line and also what appeared to be an unsuccessful dive into the sea,   Meanwhile, a single Black-necked Grebe kept us occupied as it busied itself in the water immediately in front of the hide.

And so the morning ended as I bade my farewells to Malcolm and headed off to Andy, passing a lovely male Black Redstart on the final stretch of track, where I was greeted by a Collared Dove in his garden below which, I suppose, meant that I actually recorded 44 species during the morning!


Check out the accompanying website at http://www.birdingaxarquia.weebly.com for the latest sightings, photographs and additional information.
Posted by Bob Wright - The Axarquia Birder at 04:00