Ventas de Zafarraya and its Hinterland

Back from an early visit to the local doctor so that I could let "Lady Dracula" suck out some blood prior to my annual check-up next week, so time to get organised and drive up to the old railway track at Ventas de Zafarraya which crosses the Malaga/Granada provincial border.  At least upon arriving at 10.30 the sun was now shining on the mirador side of the old tunnel, the temperature seemed warmer than the 7C suggested by the car but very little bird life about.  The walk up to the old ruin and back produced plenty of Black Redstarts and, at the far end, the targeted bird, a male Blue Rock Thrush.  Moving past the cliff face holding the large cave I had a single Rock Bunting and once through the tunnel a couple of Serin.  Both Chaffinch and Thekla Lark were recorded at the far end of the walk and approaching the tunnel on the return walk a couple of Black Wheatears flew up onto the wires above.

Leaving the railway line, I made my way through the village and out into the fertile market garden area where the irrigation pond held a score of Mallard.  Plenty of White Wagtails in the area along with the occasional Spotless Starling, a small number of House Sparrows and a Greenfinch.  Then, making my way towards the "Magpie Woods," I actually had at least a dozen Iberian Magpies around the water trough just beyond the last produce field.

Once clear of the woods and making my way through the arable fields I soon picked up at least seven Magpies, Crested Lark and Corn Bunting.  A Stonechat was resting on a stalk at the side of the road and as I approached my "Owl Destination" a small covey of Red-legged Partridge flew across the road.  Stopping the car it did not take me long to find the sleeping Little Owl and, photos taken, moved on to take the large left-hand loop back to the road I had just traversed.  The first Kestrel of the day put in an appearance and, stopping at a ford to check the local bushes, a Robin flew down to alight in front of the car and bid me welcome to his domain.  Lots more Chaffinches but no sign of any Brambling.  Finally, a female Sardinian Warbler before heading back towards Ventas de Zafarraya.

A last minute decision saw me turn left as I approached the village to make the ten minute diversion up to the woods at El Robledal in the hope that I might find a Jay and even possibly a Green Woodpecker.  A Blackbird as soon as I turned on the track followed by a couple of distant Chaffinches but then nothing.  Approaching the picnic area I realised why the cars were parked at the start of the turn off as a mixture of mud and thawing snow had left a rather messy track.  Nothing ventured, I carried on and parked so that I could take a walk around the back of the picnic area but no bird life whatsoever. 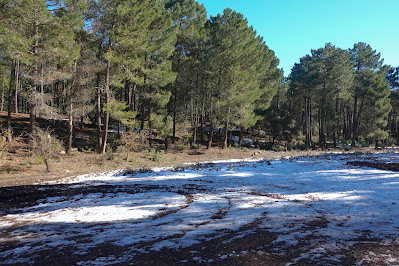 It seemed a good idea at the time and I had hardly reached the main track as I set off for home when I saw a very distant Wood Pigeon just above the tree line and, as I stopped to focus my bins, a Jay crossed the road in the opposite direction.  Must have been fete!  But if that was fete, what was to follow?  Once through the main pines I stopped in my usual place to check the almond trees for a resting Iberian Grey Shrike and saw what appeared to be a very strange Buzzard resting atop a large, bare bush.  Time to raise the bins, see the impressive yellow tallons, hawk-like features and far too large to be a Sparrowhawk.  As I reached for the camera off the passenger seat the bird dropped down out of sight to presumably pick something up.  Thinking I had time, I carefully moved the car to the left to hopefully give me a better view through the door window, glass already lowered, but the bird was up and away to the left with what can only be described as powerful but unrushed wing beats, tail out straight behind and not the "mad dash" of a Sparrowhawk.  I could not believe what I had just seen; surely a female Goshawk. So having watched the lady fly off to the left and out of sight I turned the engine off and reached for the guides to check on what I had just seen.  Yes, no doubt, a female Northern Goshawk.  Now that certainly did make my day. 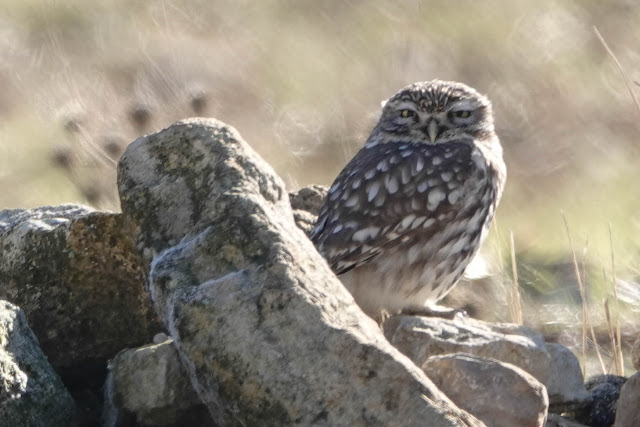 Check out the accompanying website at http://www.birdingaxarquia.weebly.com for the latest sightings, photographs and additional information
Posted by Bob Wright - The Axarquia Birder at 08:19