Back to Algarrobo Costa and the River Walk 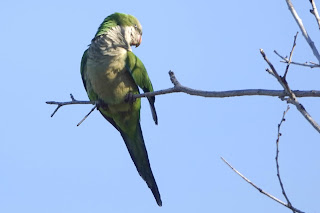 Following yesterday's very disappointing visit to the Rio Velez, and that's without even considering the birds on show, it was a delight to enjoy a walk up the Rio Algarrobo this morning and in beautiful weather which, although it also brought out the walkers, did not interfere with my birding experience.  Indeed, even with just a sleeveless birding coat on I was over-dressed to cope with the increased temperature!

No sooner at the start of the walk and a Black Redstart and the first of many Chiffchaffs to be seen.  Collared Doves were calling and showing and as soon as I reached the more open trees a single Goldfinch and scores of screaming Monk Parakeets.  At least forty Spotless Starlings feeding on the ground but disturbed by the approach of a trio of walkers before I could check for any Common Starlings in their midst.

A couple of Blackbirds departed the area as I continued on up the track and checking a large Eucalyptus tree in the barbeque are I found a single Wood Pigeon high up in the branches.  To my left as I looked over the wall to the narrow, flowing stream a Green Sandpiper suddenly took off and I was to find the bird once more as I approached the motorway underpass.  Also present a number of House Sparrows and then a single Cattle Egret on the river side of the sewage work's boundary fence.  The return journey was also to find two more egrets inside the sewage works. Meanwhile, the nearby wire held a single Common Starling as well as a few more Collared Doves.

As I approached the motorway underpass I notice the large "brown blob" in a bare tree of the far side of the river and as I watched the Kestrel took off and flew over the motorway itself.  Once beyond the motorway a stop at the grassy field adjacent to the Experimental Station entrance produced a couple of White Wagtails and, in the bare trees at the back, a few more Spotless Starlings and a calling Hoopoe.

Making my way on down towards the ford more Chiffchaffs in the vegetation on the bank of the hidden reservoir and, on the opposite side of the river, a pair of Stonechat and another pair of Blackbirds.  Closer study of the movement low in a bush also revealed a male Sardinian Warbler.  Above me the reservoir birds were starting to make a move with mainly Lesser Black-backed but also Black-headed Gulls.

And so on back towards home with many more Chiffchaffs plus a second Sardinian Warbler but, surprise surprise, crossing the lower weir back to the main track, not just a couple of House Sparrows drinking from the stream but also a male Crossbill.  Great way to end the walk.

Check out the accompanying website at http://www.birdingaxarquia.weebly.com for the latest sightings, photographs and additional information
Posted by Bob Wright - The Axarquia Birder at 09:40